Short hikes on the Isle of Sark 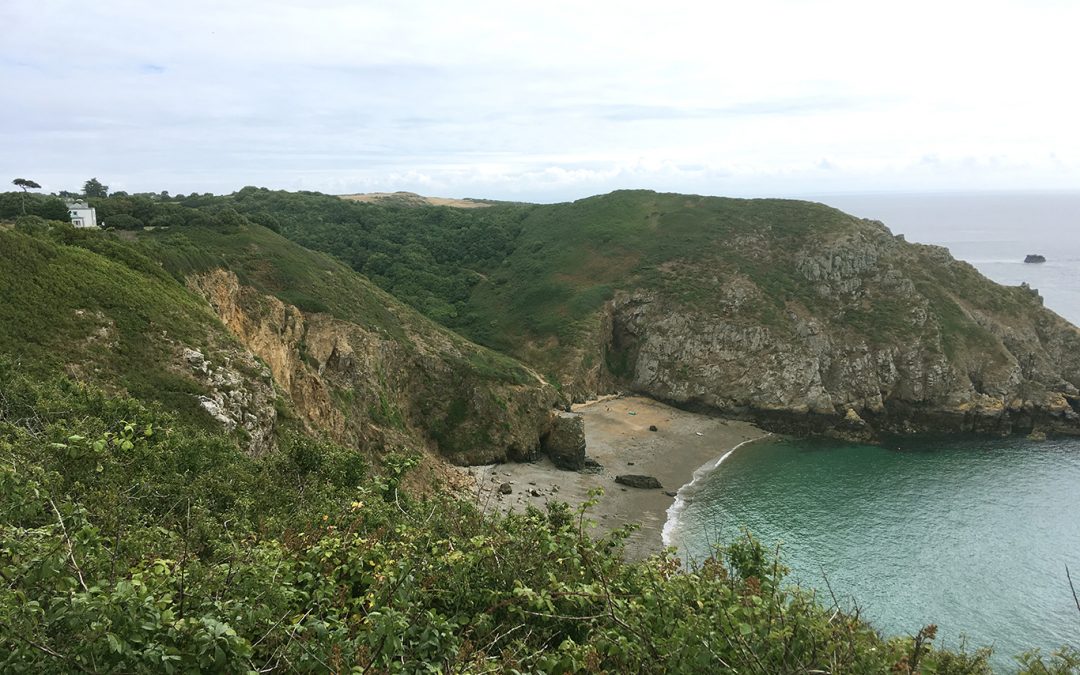 The Isle of Sark is so small, that it would take no more than half an hour to walk straight from the eastern to the western shore. But because of the jagged coastline there is a lot more hiking to do, with great views every time you turn a corner.

The Isle of Sark

Getting There: Flight from Southampton (UK) to the isle ofGuernsey (45 min); boat to Sark (1 hr)

Time: one or two days

Sark is one of the Channel Islands in the southwestern English Channel, off the coast of Normandy, France. One of the interesting things about Sark is the independence from the United Kingdom, although they share the same Queen. Sark is part of the bailliwick of Guernsey and has its own laws, parliament, stamps and flag. The isle has a population of 500 and is no bigger than  2.10 square miles (5.44 km2). The main language is English, but a lot of French influences remain, especially in the names of streets and houses. For hikers the island is interesting, because motorized vehicles are prohibited (except a few tractors), and without public lighting, Sark is one the Dark Sky Communities and the first Dark Sky Island in the world. 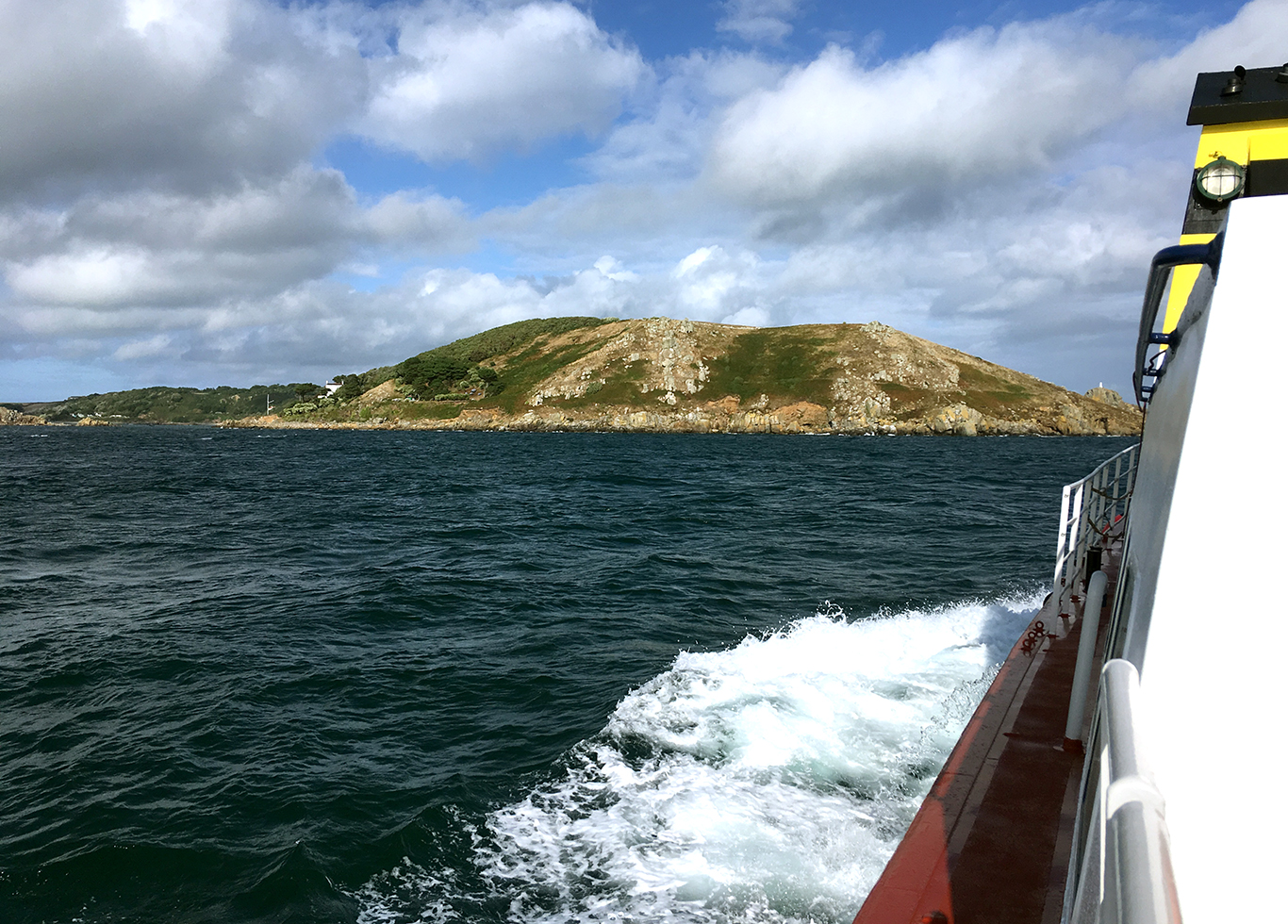 A one hour boat trip gets you to the Isle of Sark, passing the even smallers isles of Herm and Jethou at very close distance.

For hiking the island a simple tourist map will do, although we used a little booklet from Cicerone on Guernsey and the other isles, that has a few pages on Sark. The island has a very steep coast, but the inland is quite flat. Sometimes this is even a bit disorienting: although you’re near enough to hear the surf, the sea is not visible. On our first day we hiked the Southern part of Sark, including the small peninsula ‘Littke Sark’. 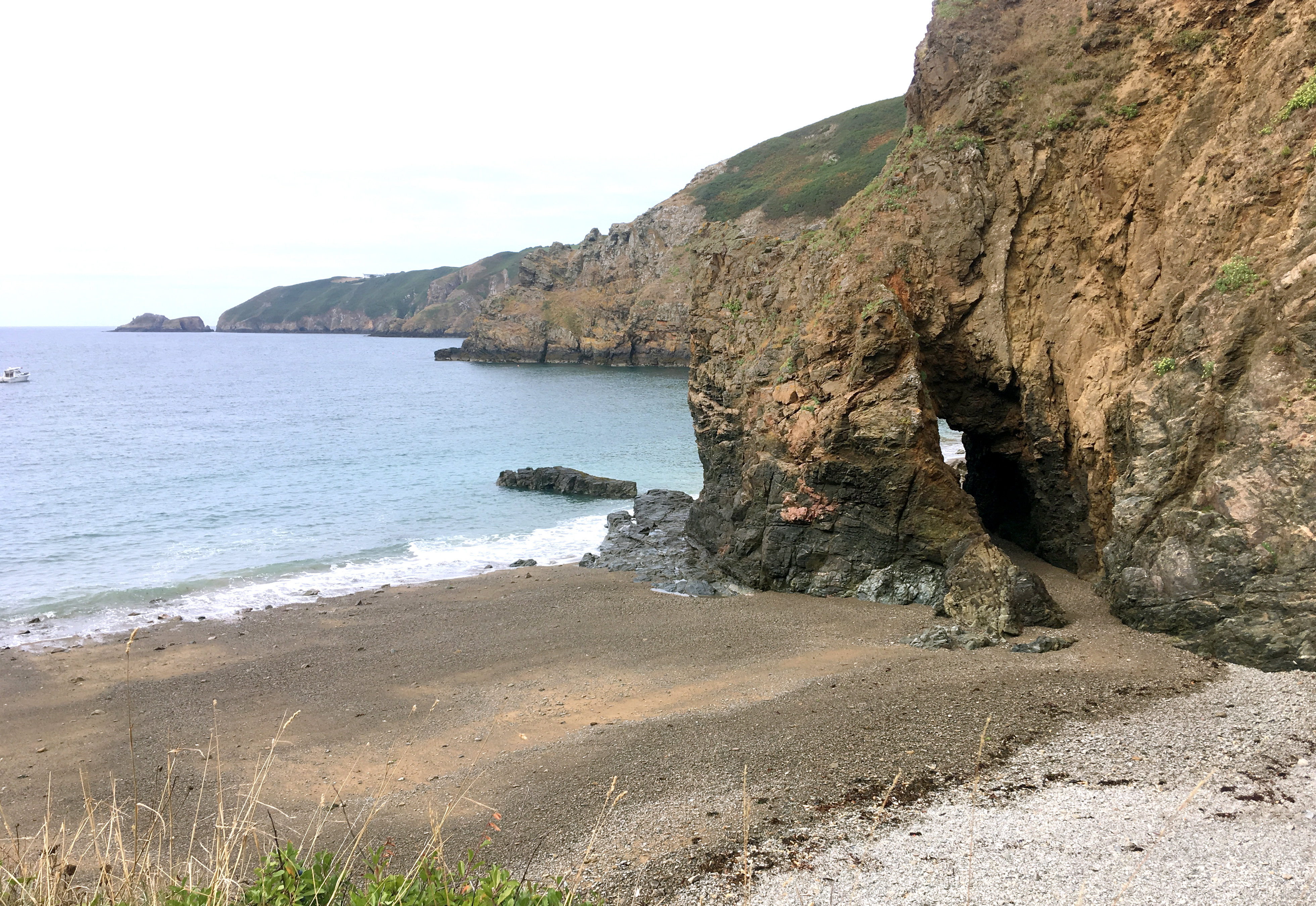 From our campsite Pomme de Chien we walked back to the little village to reach the path to Dixcart Bay, one of the two sandy beaches of Sark. The trail is well signposted at the start, but at the end you have to follow your instincts (choose the path that goes down) to reach the beach.When the ocean is finally visible, with the other islands at the horizon, the trail becomes quite steep, but it’s still an easy walk. The great differences between high and low tides make the beach grow (or shrink) constantly. Within half an hour, the beach had grown twice the size. The ocean water was very clear and although a bit cold, very nice to have a swim.

Backtracking the steep trail, we continued East on the signposted Coastal Path towards Little Sark. The peninsula is connected to Sark by a concrete causeway, called La Coupée, which was built by German prisoners of war in 1945. 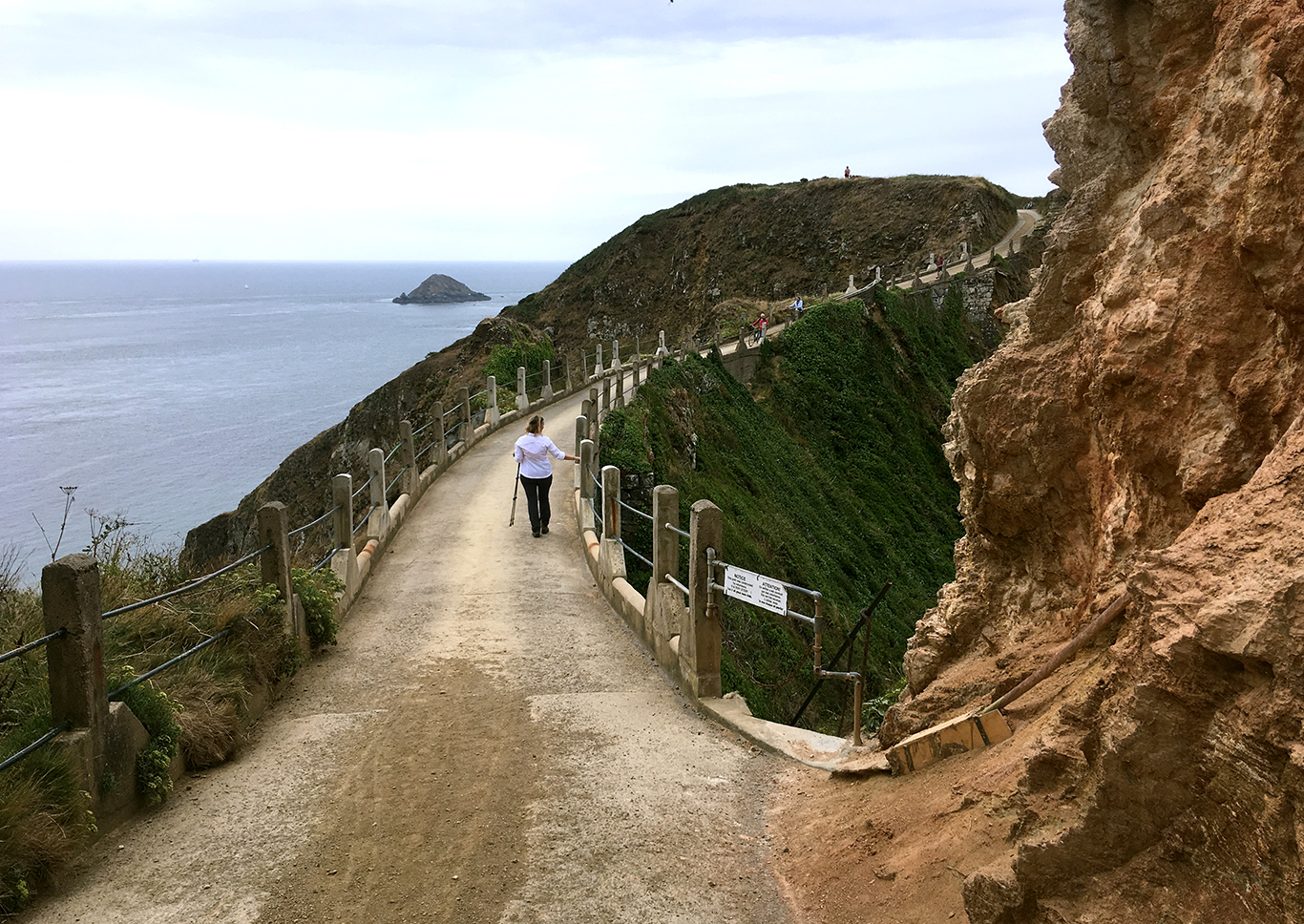 Sark is car-free, but on the narrow La Coupée even bicycles are prohibited. The only road on Little Sark leads directly to the Hotel and Tea garden of La Sablonnière. The hotel offers more expensive meals and we felt a bit out of touch with our hiker pants and trekking poles. The friendly waiter asked if maybe we were actually looking for the Tea Garden. Which we were, indeed. After some English pub food and some reading in the shady garden, we continued on the trail to the southernmost part of Sark, the Venus Pools. 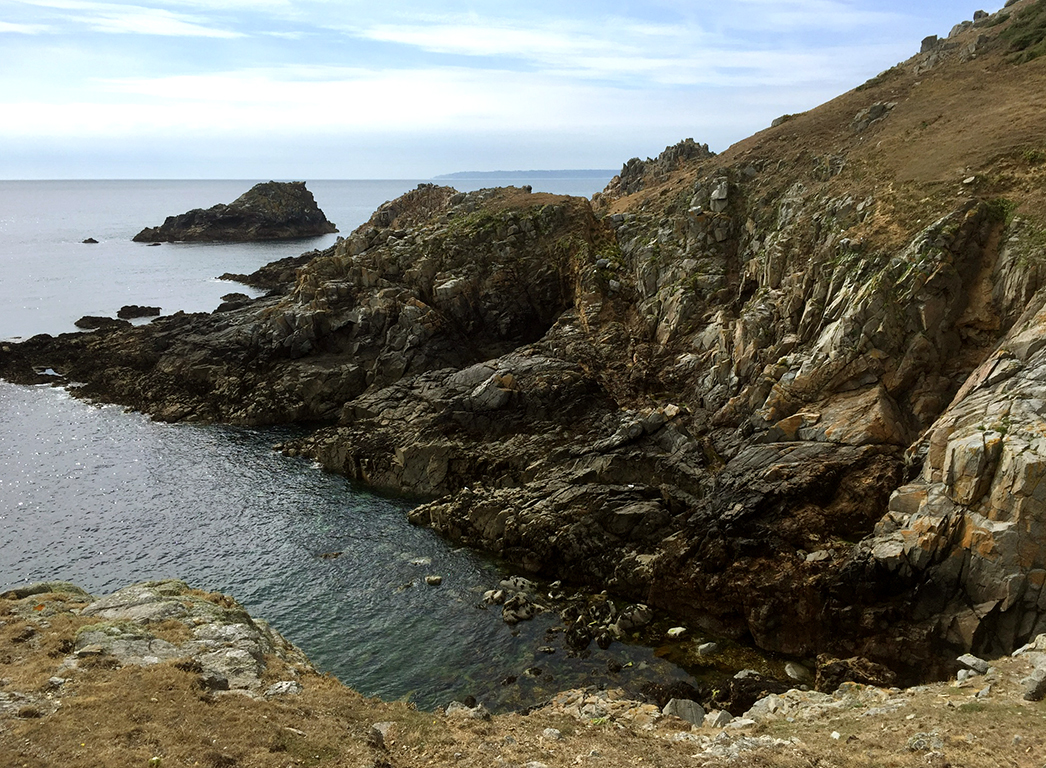 The Venus Pools are small tidal pools of seawater that remain on the rocks emerging from the seas when the tide is low. We looked down from the steep cliffs when we heard voices from down the sea. A small group of people had found a trail all the way down and took a dip in one of the crystal clear pools. Apart from the pools, the cliffs here are the most dramatic of Sark and we spent a good time looking out over the ocean. 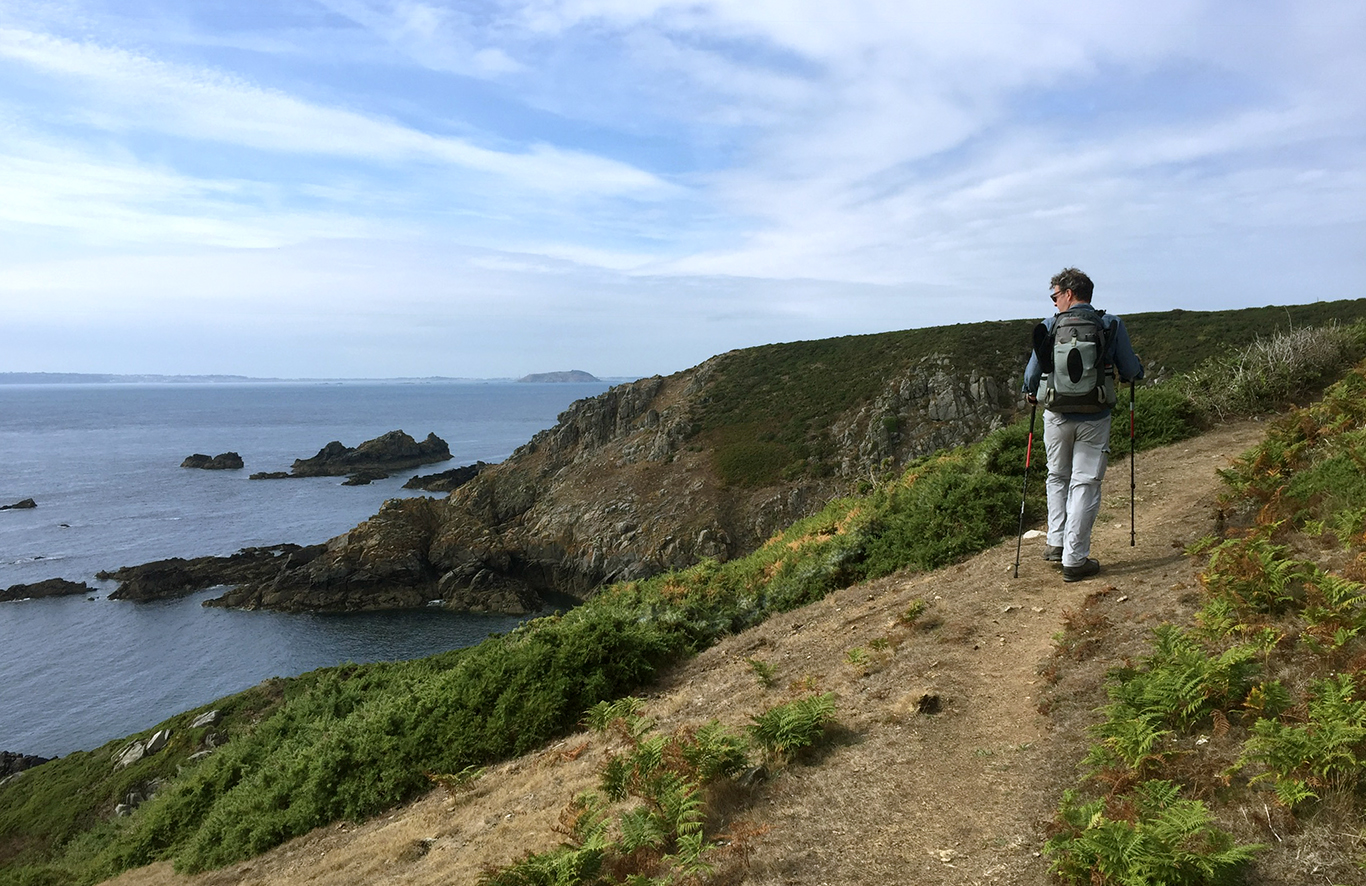 Completing the Little Sark loop, we reached the Adonis Headland, with views of Herm, Guernsey and the small island Brecqhou on the east side of Sark. The silence here was overwhelming: just the sound of the wind, the sea and two sheep, startled, running away. The final return path to La Sablonnière was not so obvious. We asked a local farmer, who was gathering eggs from his hens, how to get to the Tea Garden again. Then he, as we realized later, jokingly pretended to show us a route to follow. It turned out we were already in the back garden of the Hotel. 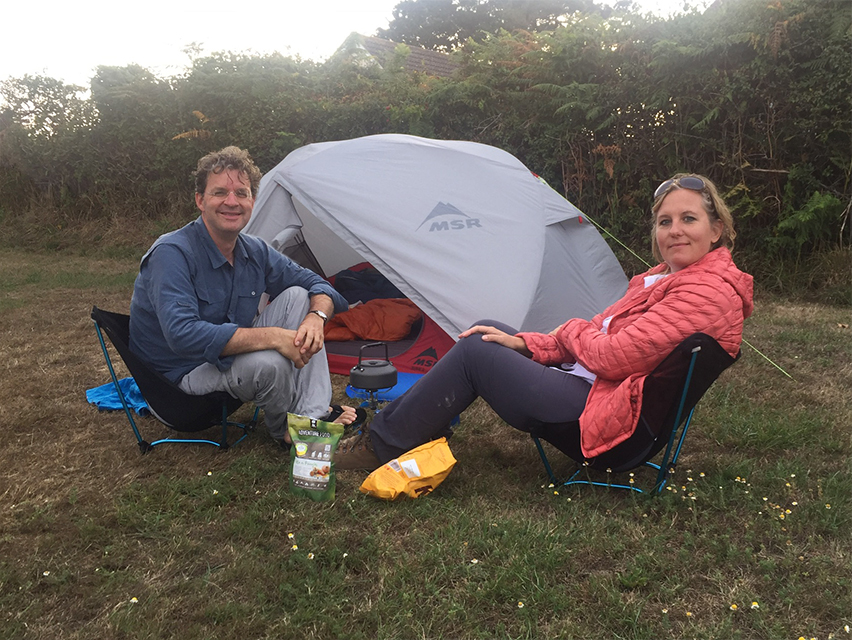 From here we walked about 2 miles (3,5 km) back West to the village and our campsite at Pomme de Chien. Such a great day. And that was just half of the island!

The next day was rainy, but that didn’t stop us from taking another short hike around the Northern part of the island. 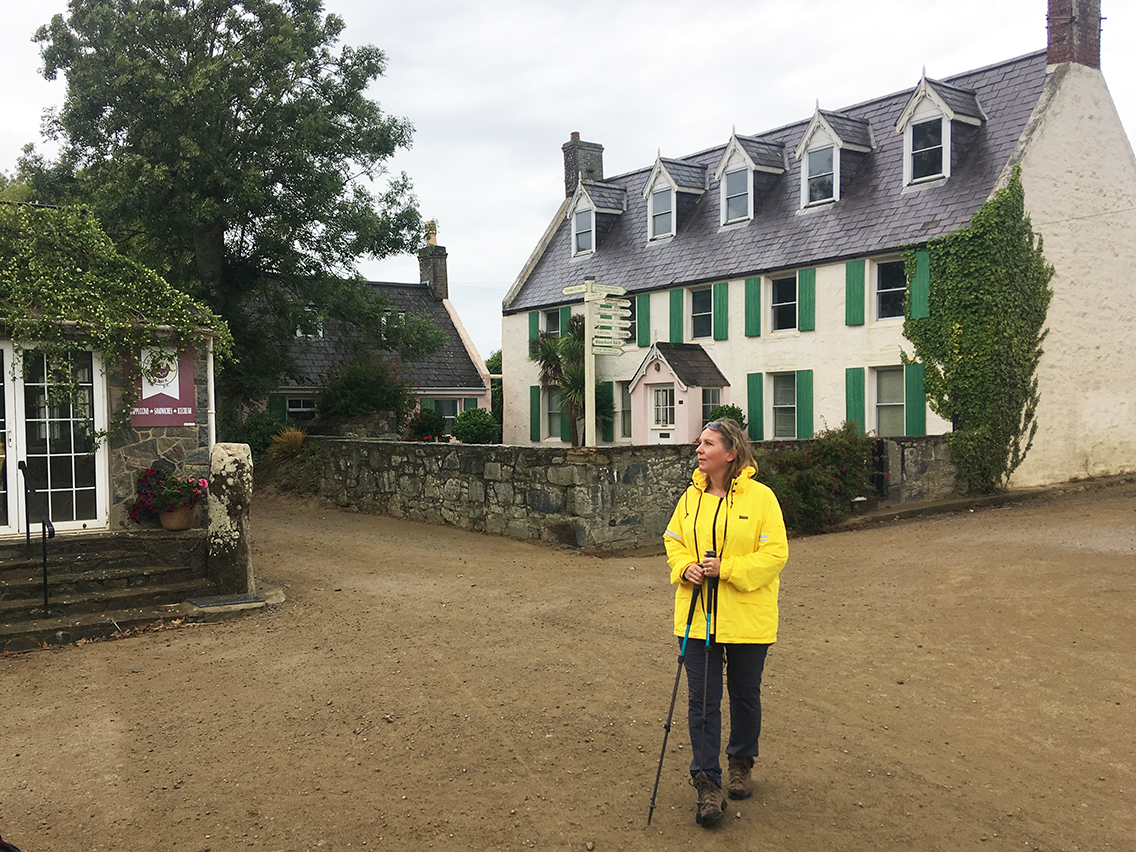 Sark village center with main street ‘The Avenue’. This must be the only avenue in the world that is a dirt road. Just a short walk from the village center to La Seigneurie, the 17th Century buildings and gardens that used to be the residence of the Sark Seigneur. Nowadays the main building is a private residence, but the gardens are open to the public (for a £5 fee). 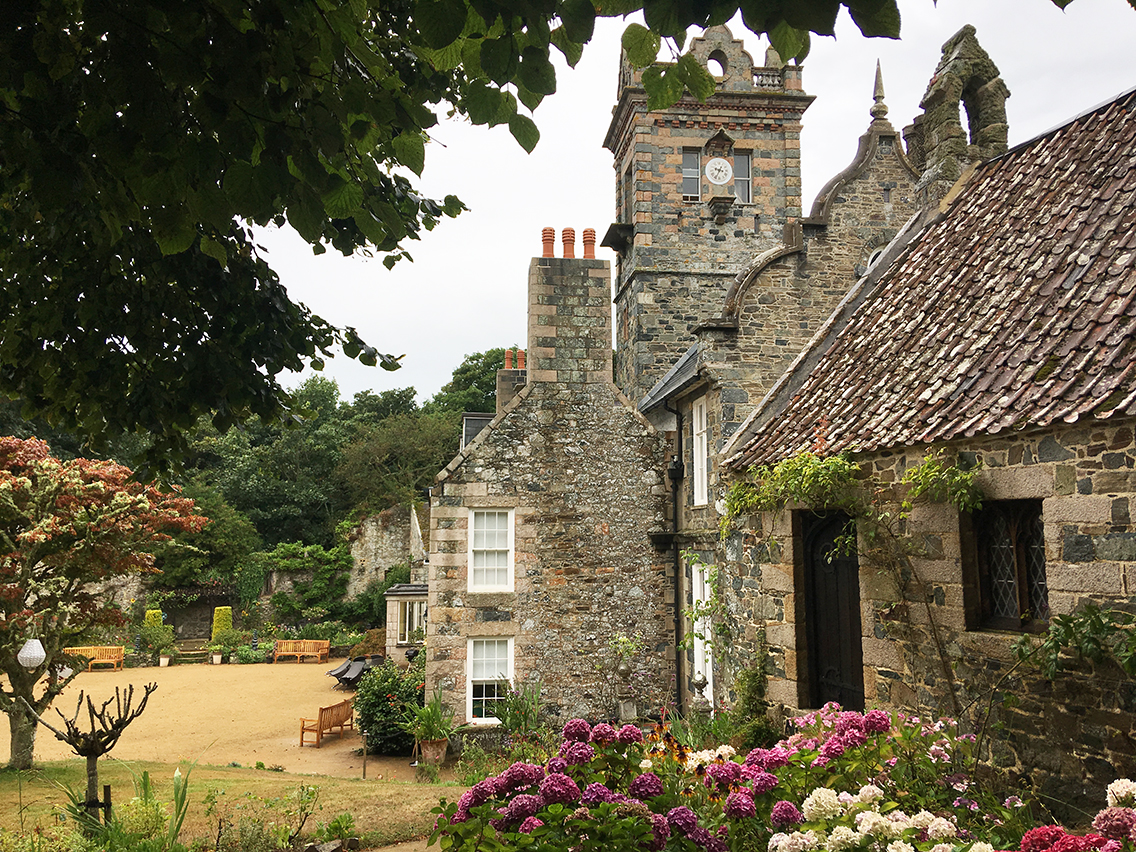 Just when we got there, a massive shower fell on us. So we spent some time in the nice pub on the estate, Hathaways, where we had coffee, read our books, charged our phones and just relaxed until the rain was over. We visited the gardens and played around in the maze, then walked down to the secluded Monks’ Pool, full of ducks. We followed the signs to find the trail to Window in the Rock, just a 15 minutes walk. 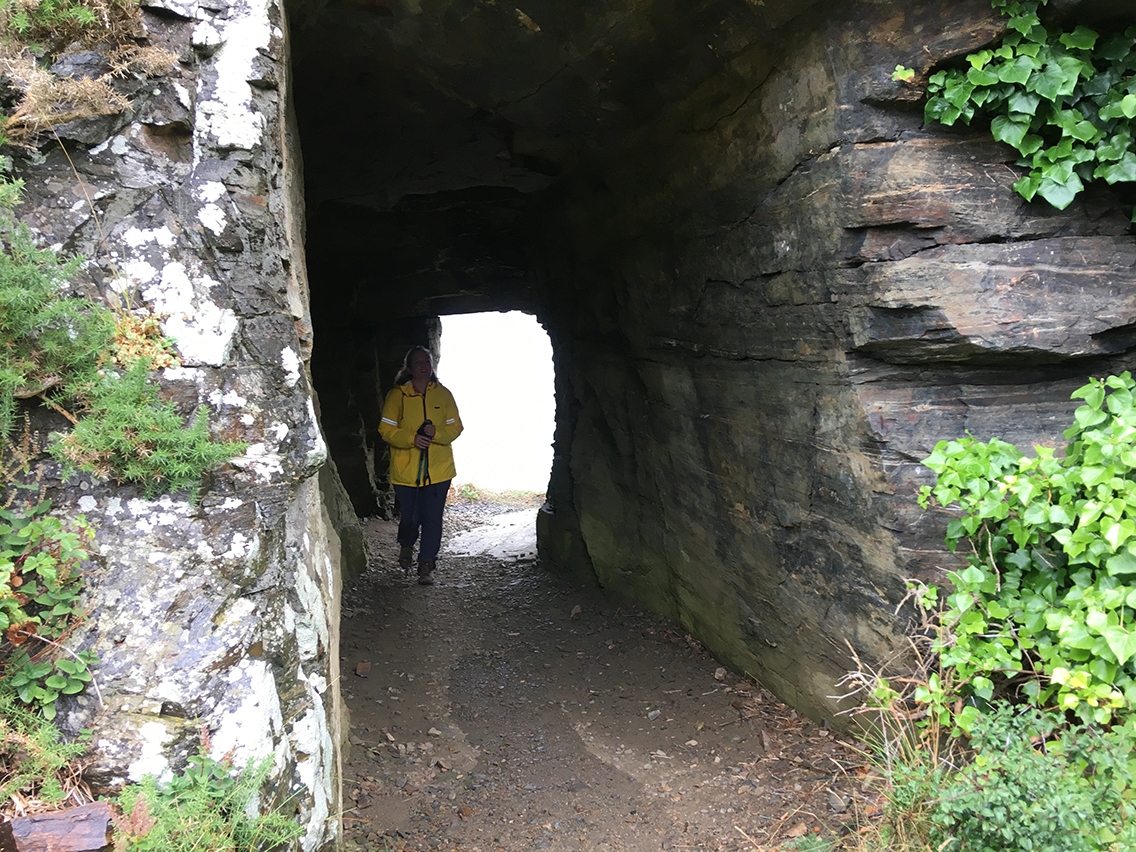 Along the short trail and close to the ’window’ there are at least 4 signs, warning for falling rock, sheer drops and a call to keep children close. The signs are not superfluous, as the end of the short dark tunnel is a sheer vertical cliff. The window is an obviously man made hole that seems have had some purpose in the past, but now is there only to give you a stunning view of the steep cliffs of Port du Moulin. 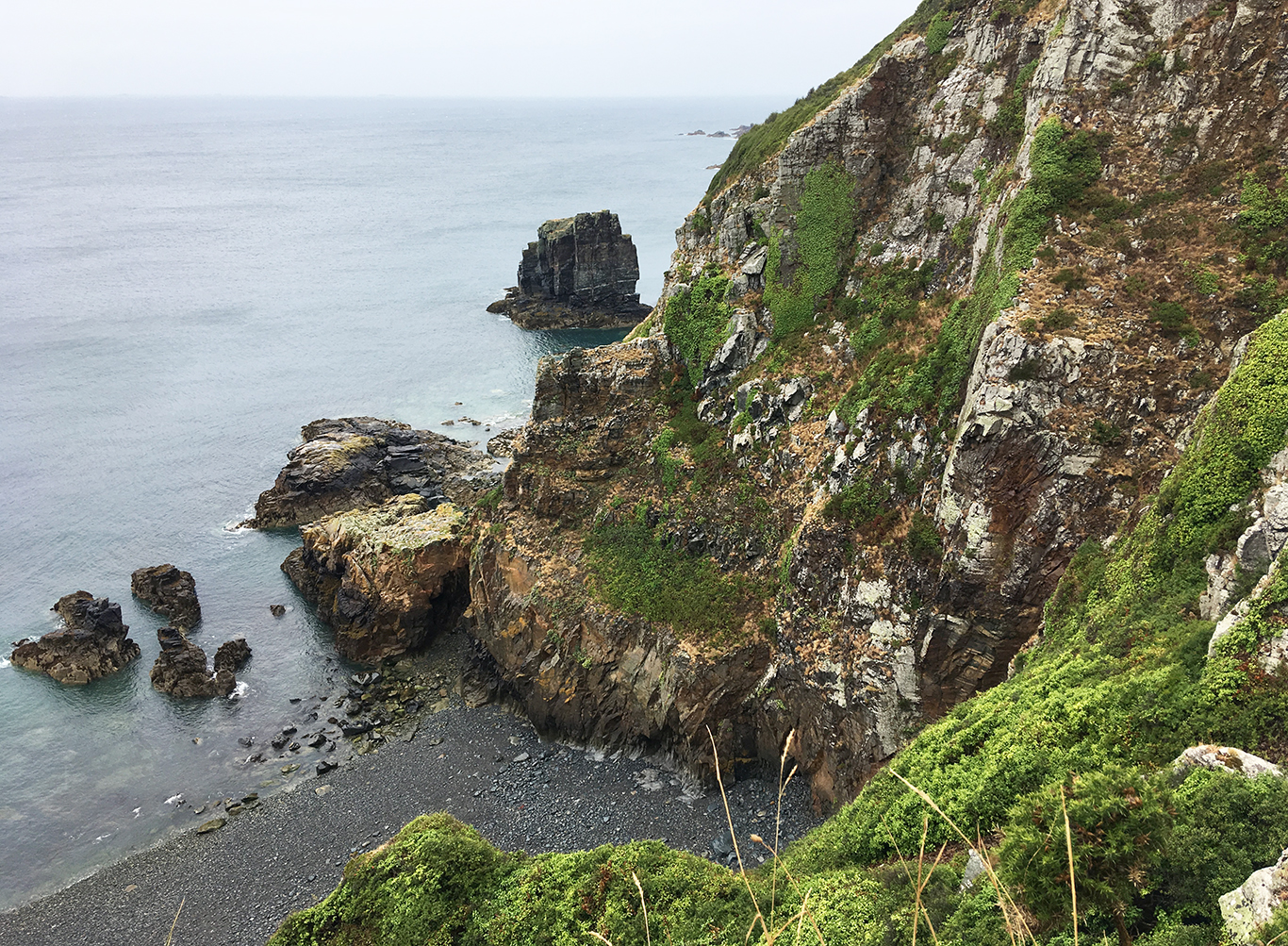 We sat there on the ledge for a while to enjoy the view. Even with some rain and wind, the rugged rocks made for a very pretty scenery. 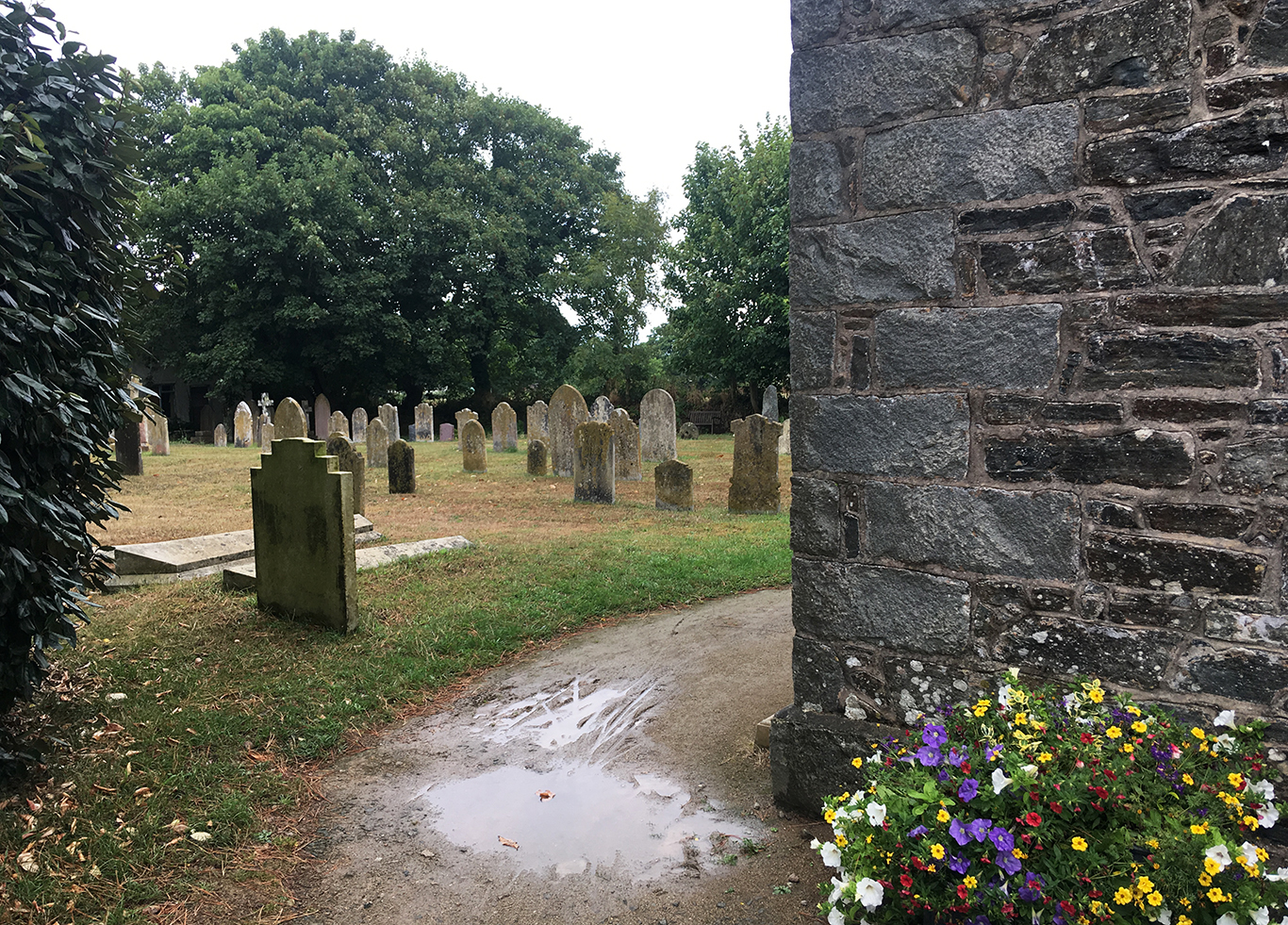 Back in the village we passed Saint Peters Church and cemetery that marks the real center of the little village. 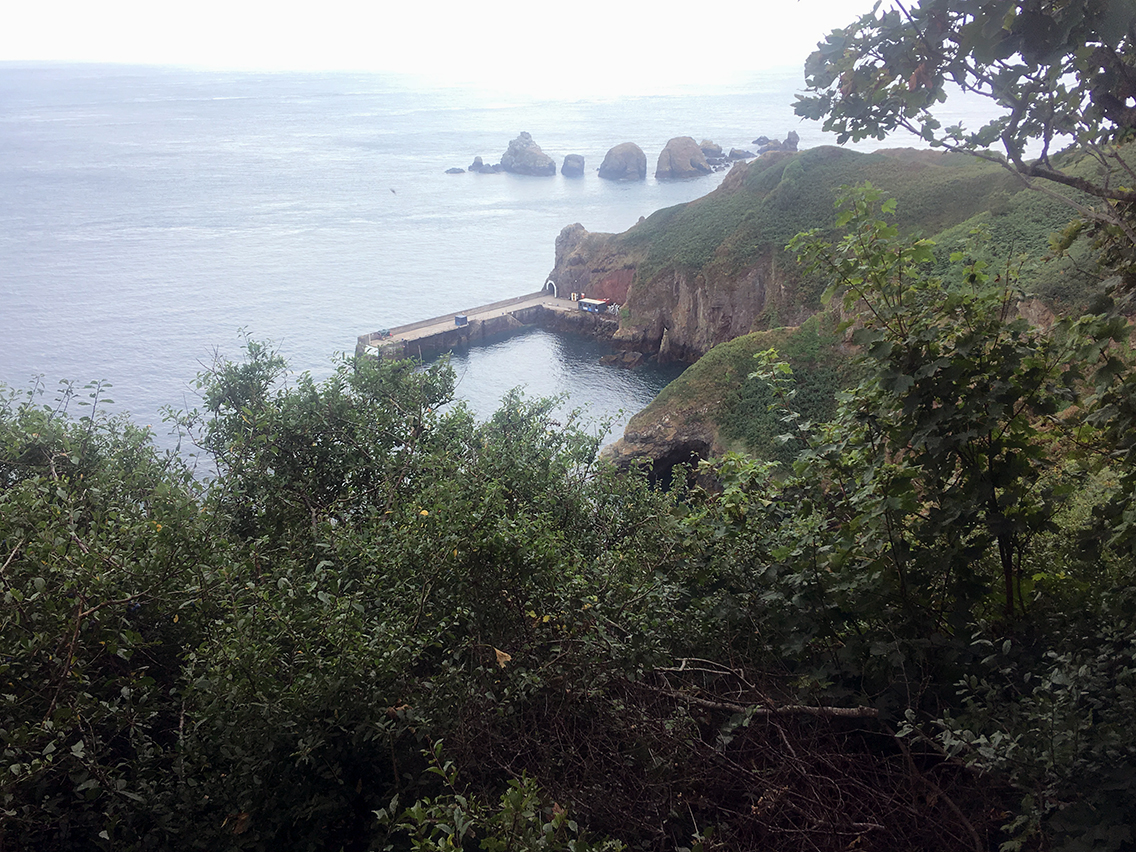 From the village we walked around the Eastern side of the island to Maseline Harbour, where the ferry would take us back to our flight home from Guernsey.