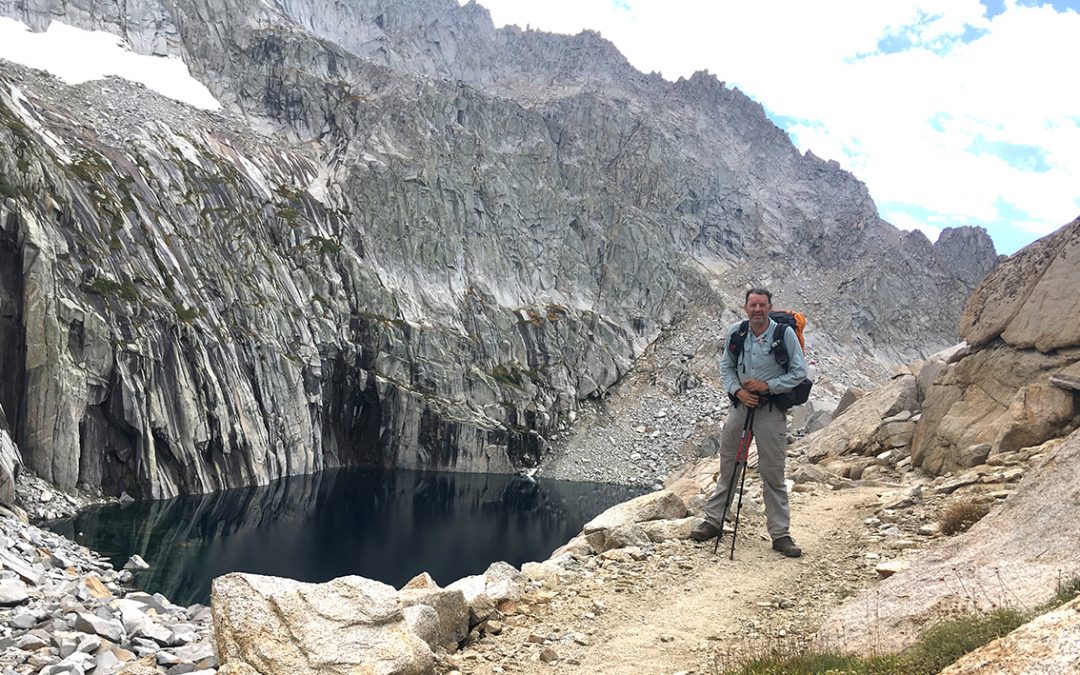 Day five of my SEKI Loop was the most impressive part of the trail so far. From the tranquil Moraine Lake through the valley of the Big Arroyo, and crossing the Kaweah Gap at more than 10.000 feet to the stunning Precipice Lake. Then descending all the way down to Hamilton Lake with a view of the vertical wall of Valhalla.

Day 5 of my SEKI loop, map base layer by Sierramapper.

Today would be a big day with lots of miles and vertical feet to conquer. So I got up at 5 am, making sure to be on the trail around 6 am. The first thing to do in the morning always concerns digging a 6 inch hole some 100 feet away from camp and water. A topic I did not intend to write about, if not for what happened this morning.

As usual I had scouted the right spot the evening before and made a mental note of big rocks, tree trunks and other landmarks, to be able to find my way in the dark next morning.
But today was very dark (a new moon in a forested camp) and after I was done, I just stepped in the wrong direction and within a minute I was completely lost. I couldn’t see the lake, my tent or the trail. I thought walking down would bring me to the lake, but apparently I was at a higher slope, with lower areas in all directions. After wandering around for 5 minutes, not knowing where I was going a light panic got hold of me. But then I spotted a square inch of reflective tape on a food locker with my headlight. It guided me back to another locker, and eventually to the lake and my tent. So this is what I learned today: next time I will leave a light on inside my tent or put reflective tape on the outside. 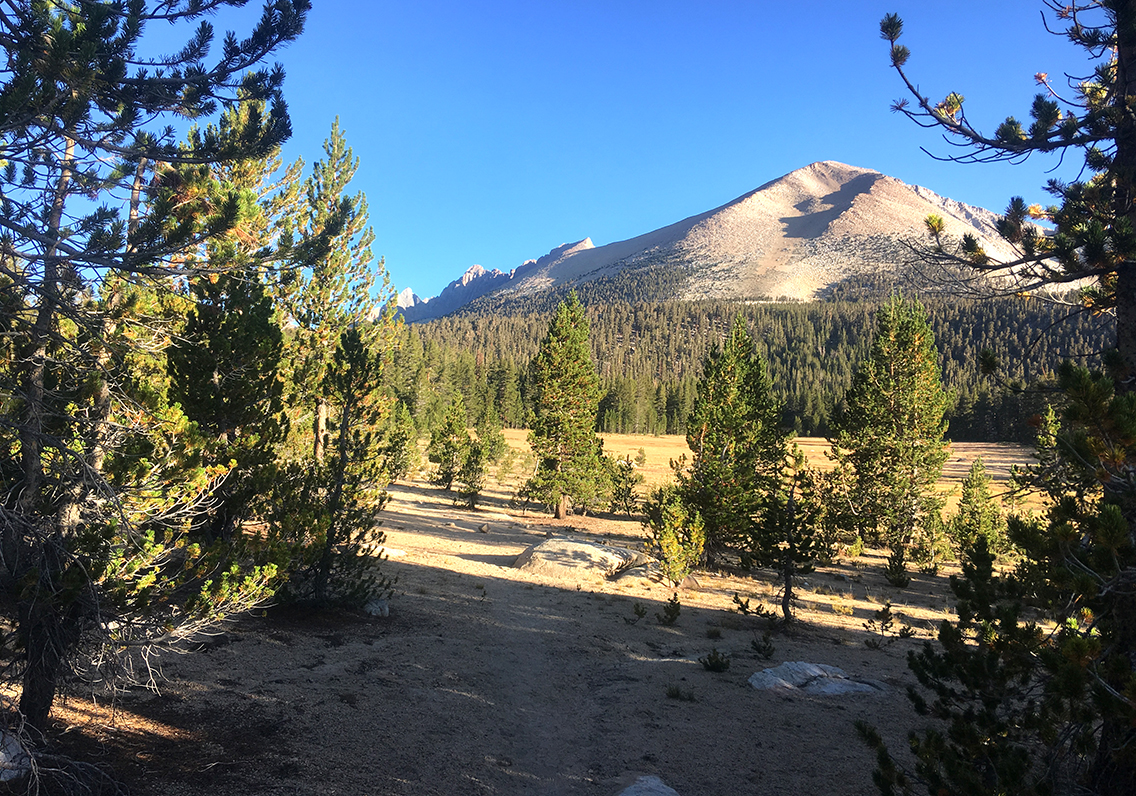 Having lost a bit of time, I still managed to be on the trail by 6:15 am. I crossed the wooded area in the dawn, climbing up to the more open part of Chagoopa Plateau. After about 3 miles (4.5 km) I passed the junction with High Sierra Trail (the 3.5 miles of Moraine Lake Trail is – surprisingly – not an official part of the HST). From this point the amazing Kaweah Peaks Ridge came into view in the northeast. 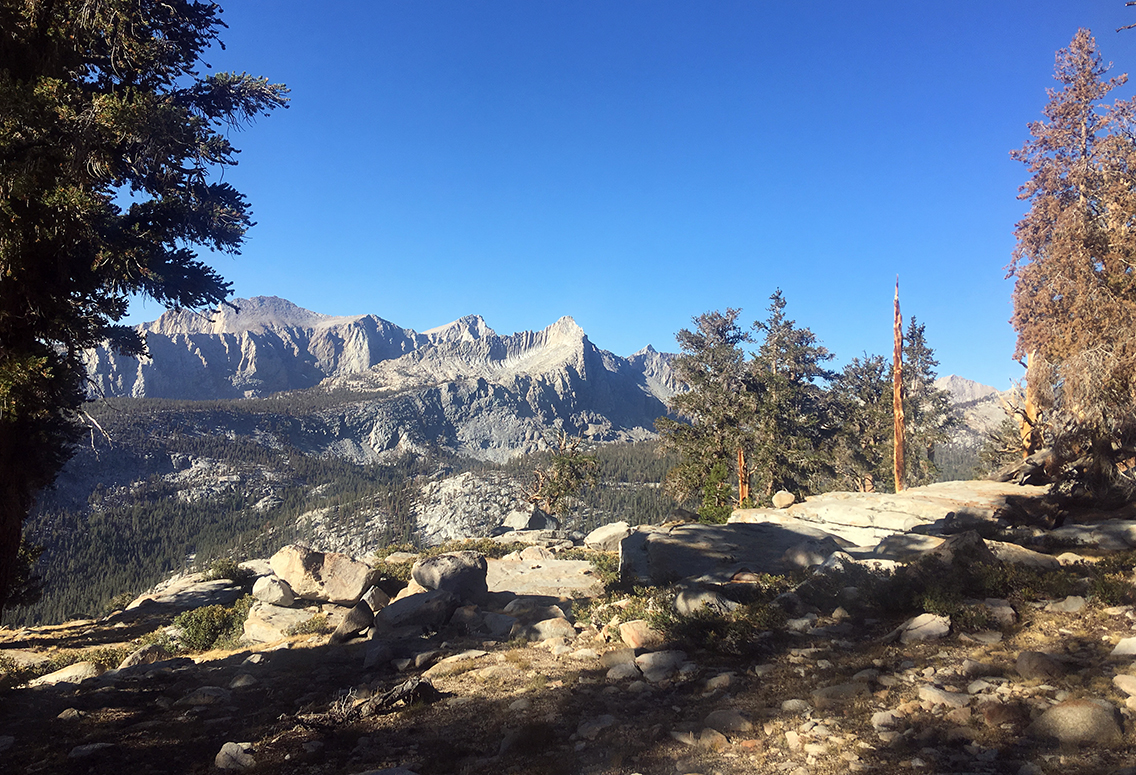 The trail continued west on the ridge high above the Big Arroyo valley, with a beautiful view of the Great Western Divide. This 4.6 mile section of trail was so good, with the view of the peaks all the time, and an easy trail going down just slightly. I met a group of Chinese hikers, heading for Moraine Lake, passing me one by one. They all had little bells on their backpacks, which reminded me of the joke about grizzlies being identified by having bells in their scat. These Chinese were the only people I met until the Kaweah Gap. So I had the beautiful valley all to myself this morning. 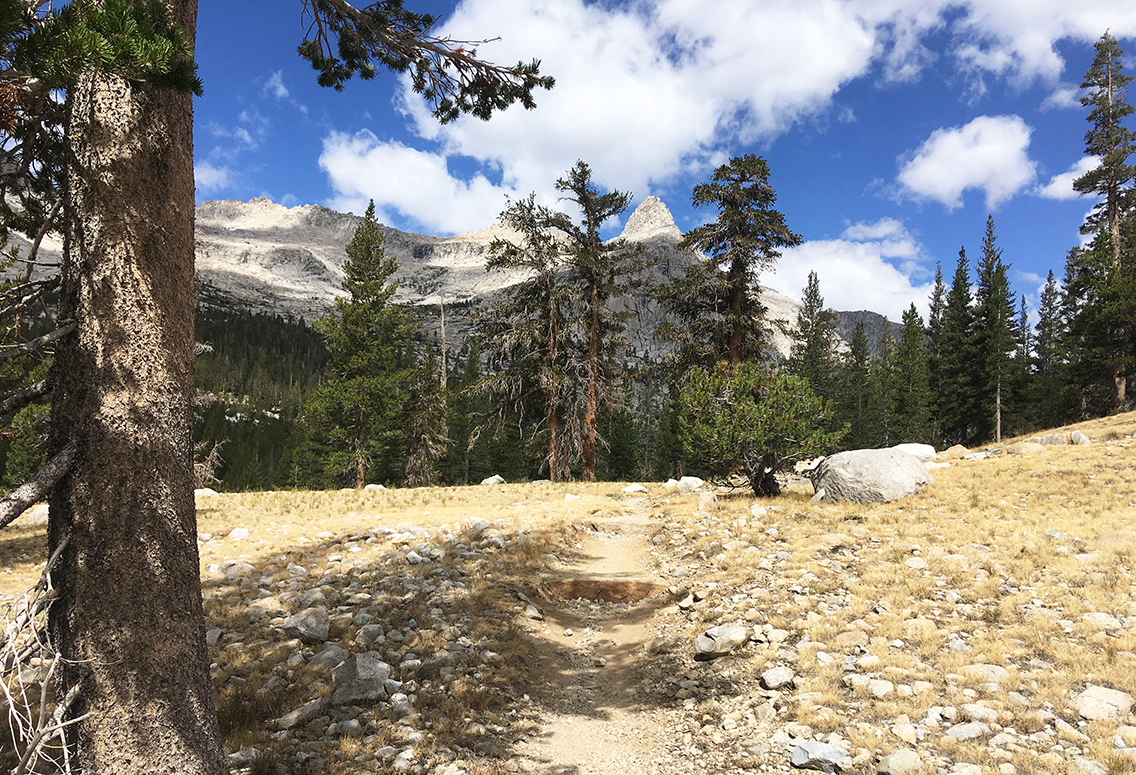 Arriving at the lowest part of the Big Arroyo trail, a prominent peak came into view, probably Eagle Scout Peak. What I liked about Big Arroyo, in comparison to Kern Canyon two days before, was that it was so much more open. Even the bottom of the valley still offered views of the mountain ranges around it. 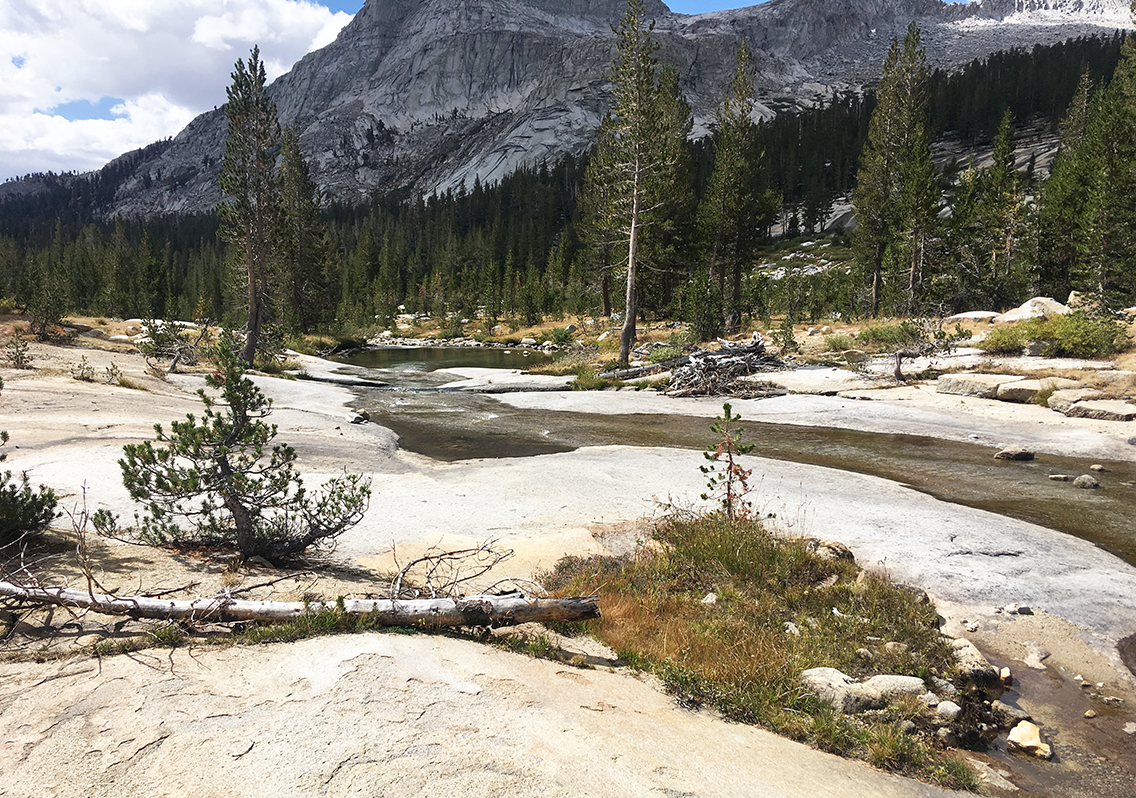 Arriving at the bottom of the valley, I crossed the Big Arroyo River. The water looked inviting for having a lunch break, but I saw huge clouds packing above the mountains. Not wanting to risk being at the pass during a thunderstorm, I decided to hike on to the Kaweah Gap. 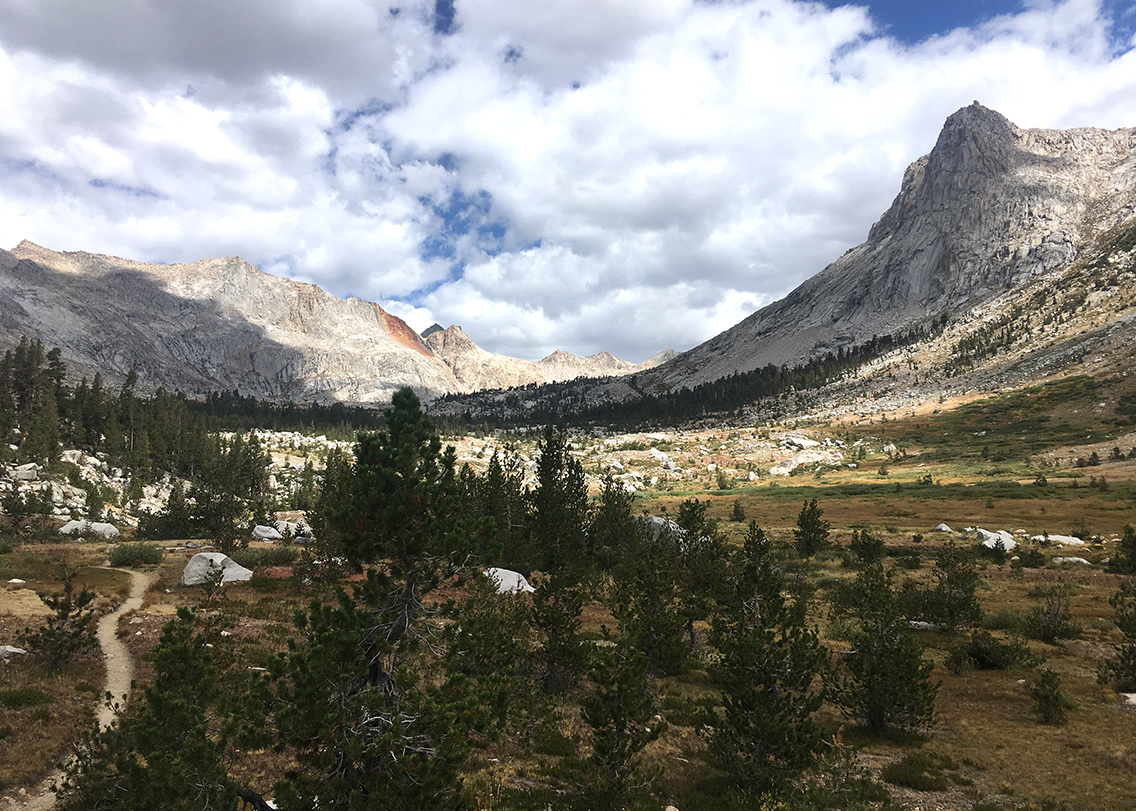 Approaching Kaweah Gap (near the dark mountain top in the middle) with view of Kaweah Peaks Ridge on the right, the terrain became more empty, the trees smaller and the trail started to ascend a bit more.

Getting nearer to the pas now after 10 miles (16 km) since Moraine Lake, I decided it was time to have a break and eat something. I made my tuna-tortilla and drank a half liter of water with Skratch hydration lemonade powder (this kind of powders really give me an energy-boost).

Coming from the east, the Kaweah Gap is not a difficult pass. The 10,660 ft (3.249 m) altitude is reached by a very gradual ascent, with a few switchbacks only at the last 100 feet of vertical ascent. Maybe this is why  the gap is usually not really mentioned as a pass at all. But, as I would see soon, if  you would approach it from the west, Kaweah Gap should definitely be considered a serious mountain pass. 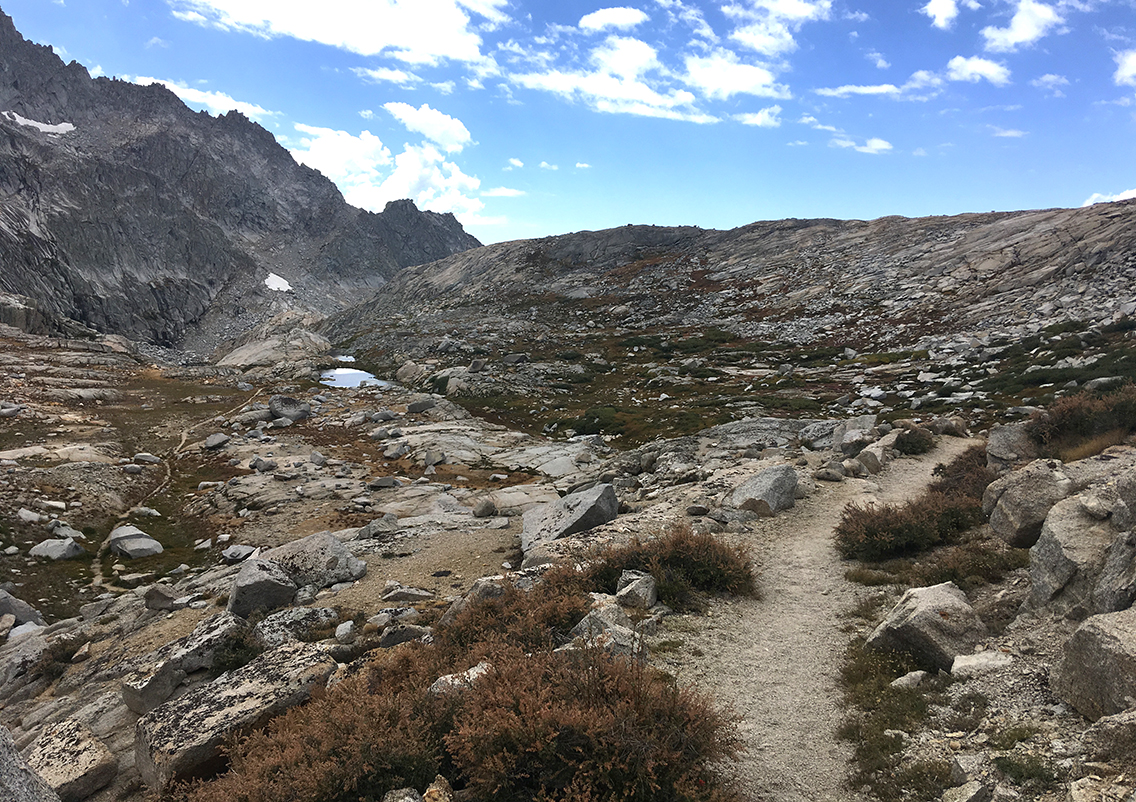 Arriving on top of the pass was again a special moment. Happy about the achievement, happy about going down from then on, but mostly because of the surprise of the totally different view on the other side. The first small lakes came into view, but they were nothing in comparison to the lake I was about to see. 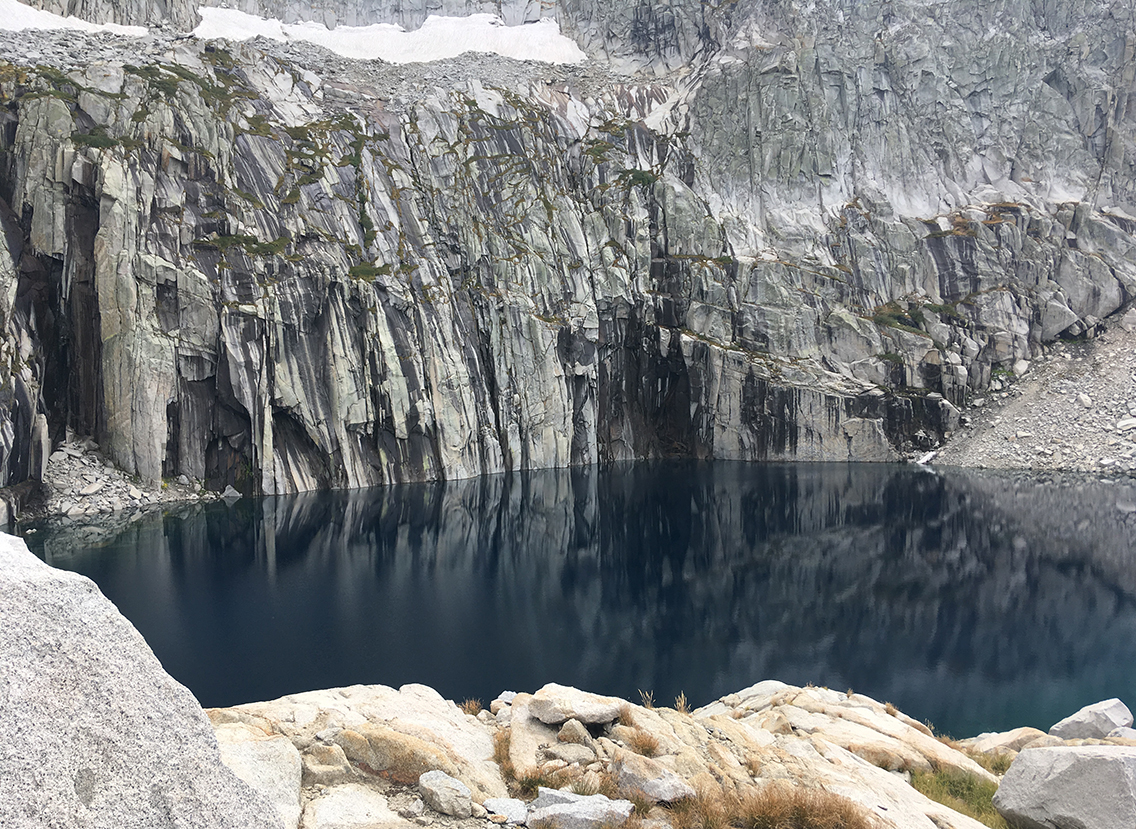 There it was: Precipice Lake, made famous by photographer Ansel Adams in 1932, now sitting in front of me, deep blue and silent. The moment I saw it, was literally breathtaking. 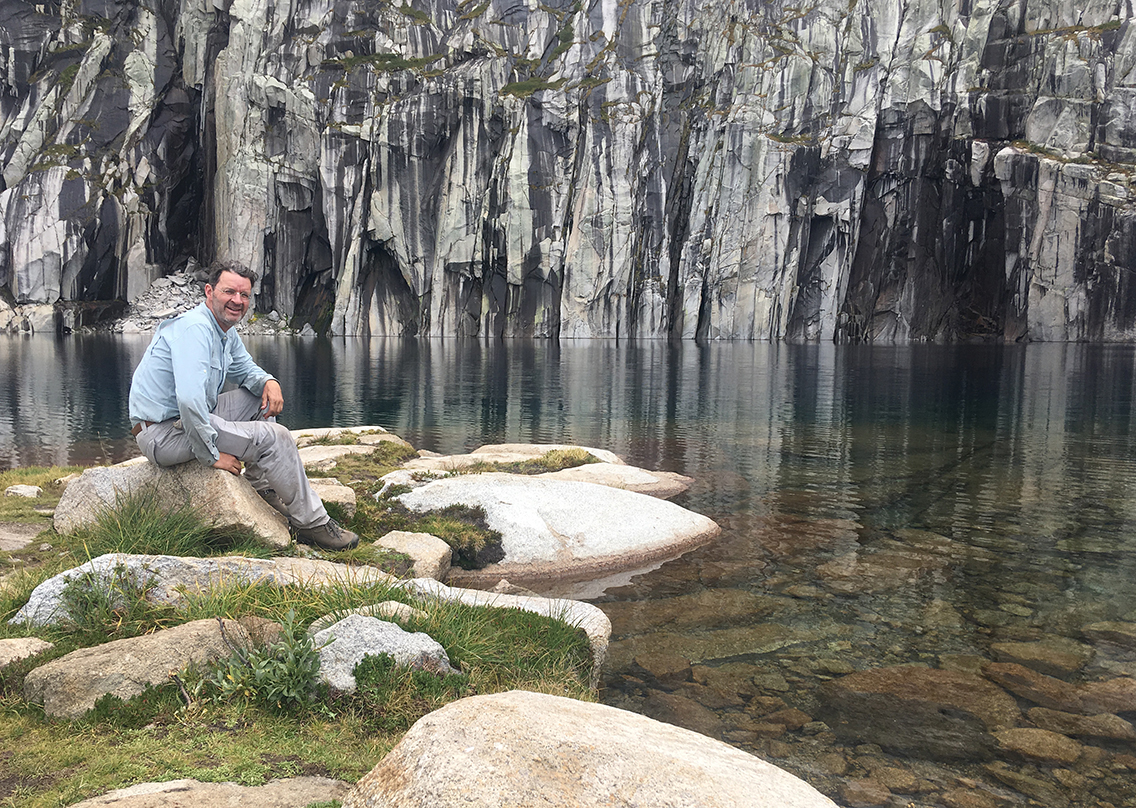 I seemed to be all alone at the lake, but after walking slowly to its base, I saw a hiker putting up a tent on the granite slabs, struggling with the wind. She was on her way to Moraine lake with her mother, but decided to call it a day after the long climb up from the west side.
Getting at the base of the lake, I refilled on water and took some time to sit silently on a big rock at the lake, one of my favorite things in life. 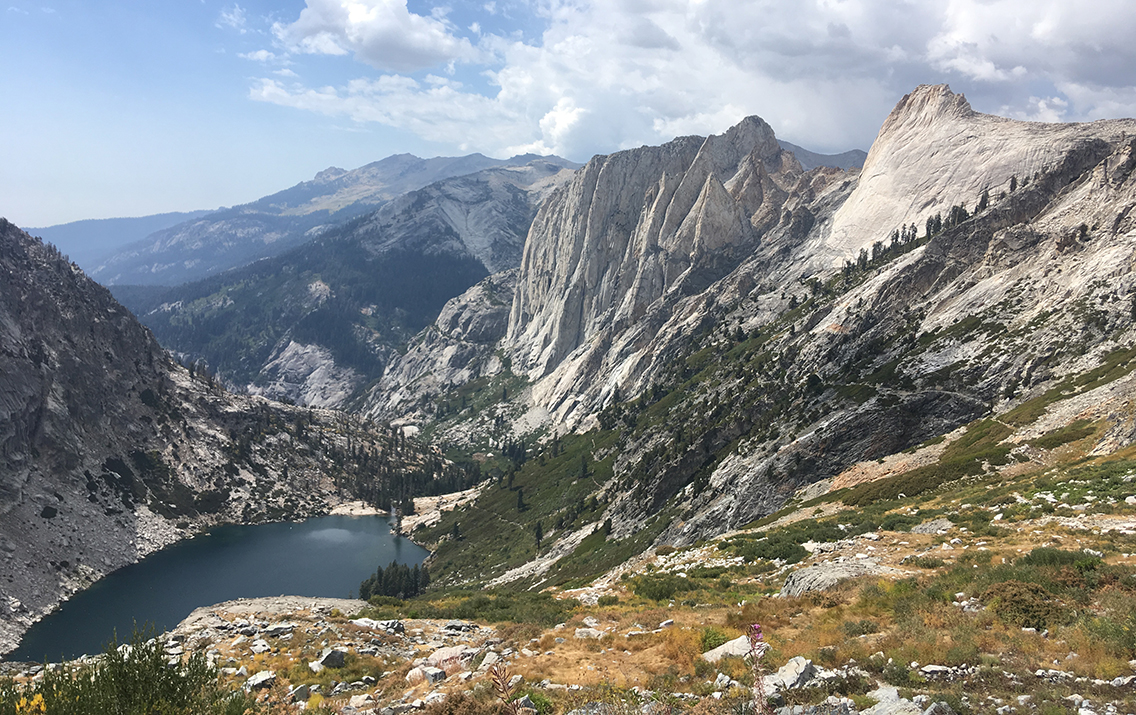 As if the sight of the lake was not enough, Mother Nature had a somethings extra in store for me. Just turning my head to the right,  I had an unbelievable view of Hamilton lake and Valhalla (the big vertical wall, also known as the Angel’s Wings). This would be the view for the next 5 miles or so. Definitely a good reason to hike the High Sierra Trail in the direction west to east. 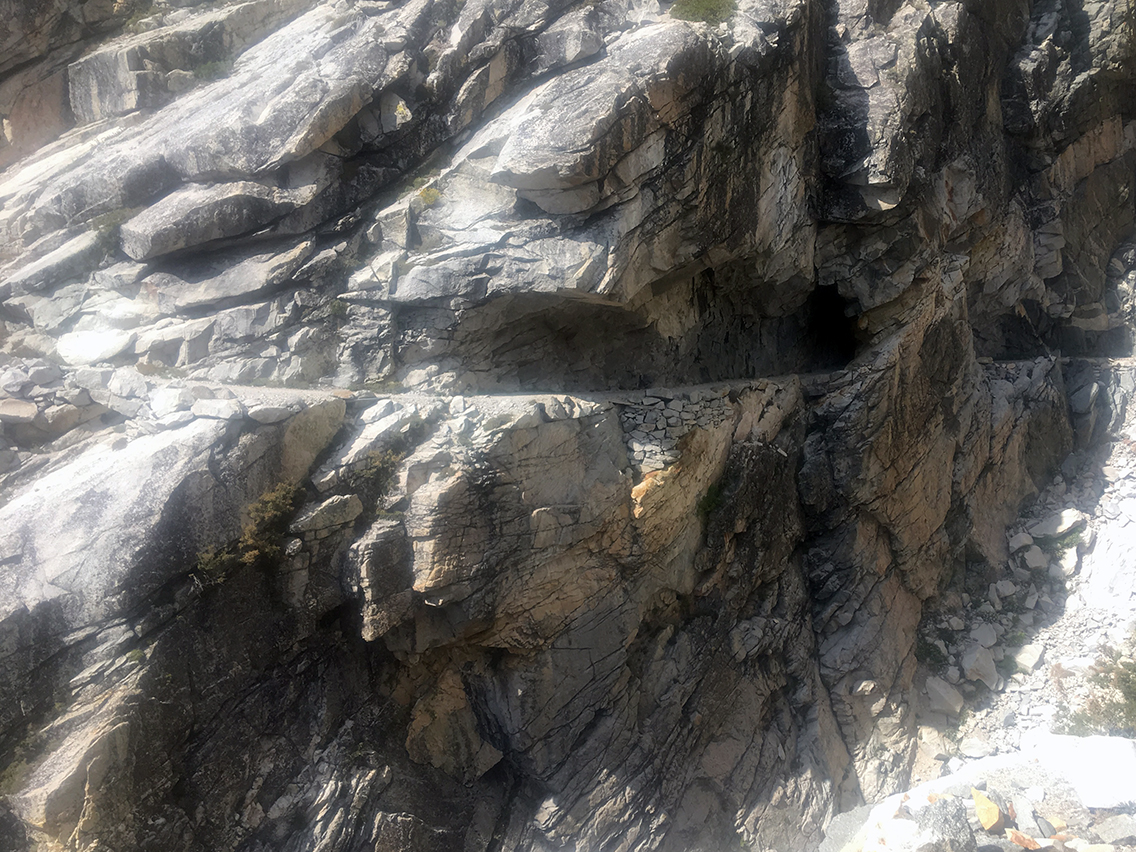 After a set of switchbacks, about halfway the trail I reached Hamilton Gorge, a steep vertical drop down into the canyon below. This is one of the more exposed sections of the High Sierra Trail. The trail makes a sharp bend and follows a ridge,  crossing the ravine. Here is the location of a former steel suspension bridge, spanning the gorge in 1932. The bridge was destroyed in 1937 by an avalanche and never rebuilt. Still there are rusted steel cables lying around where the bridge once was. The Civilian Conservation Corps created a trail on a narrow ledge instead, and in one part made a tunnel. I have such an admiration for the men who built these trails.
The section is exposed, but I don’t think it is very dangerous (and I do have some fear of heights). The trail is wide enough to walk on and as long as you take it easy, there should be no problem. 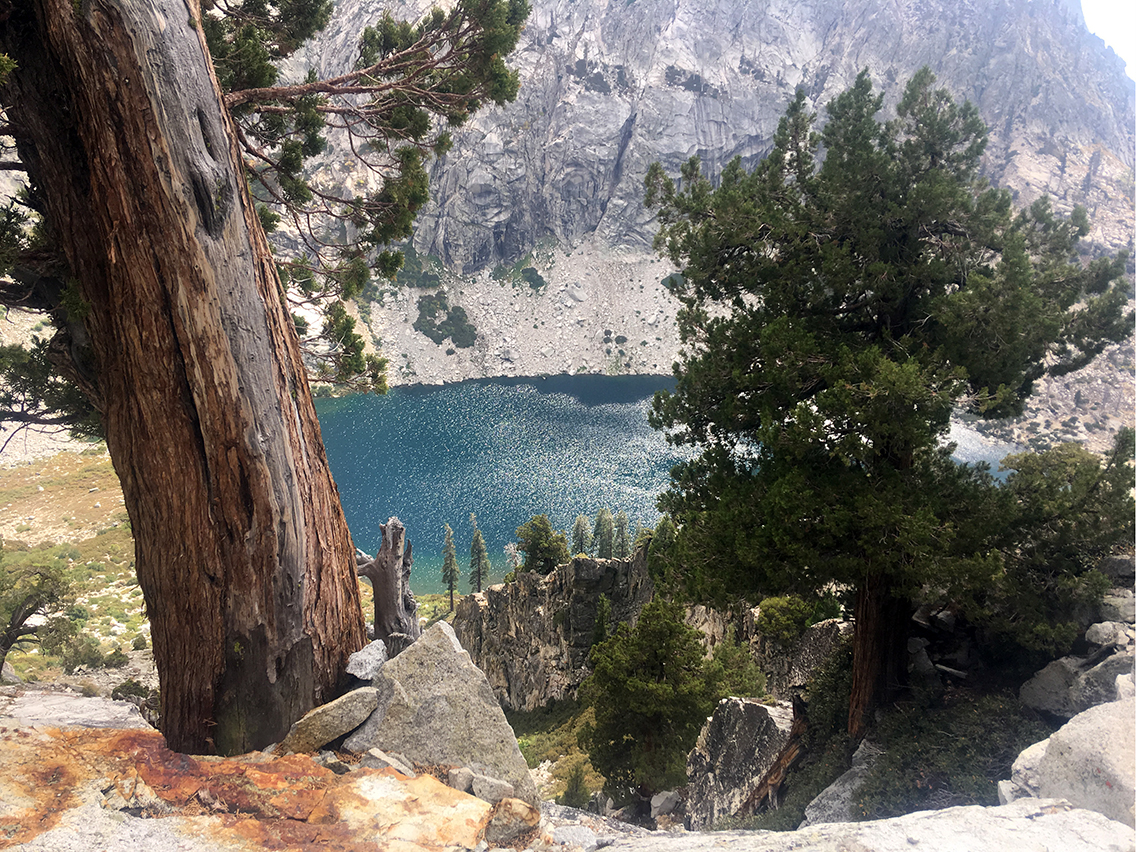 As I was getting closer and closer to the lake, the trail became greener with trees and lots of lower bushes that almost made the trail disappear. The lake looked really inviting. Already I could see a group of hikers on the granite beach, pitching tents. 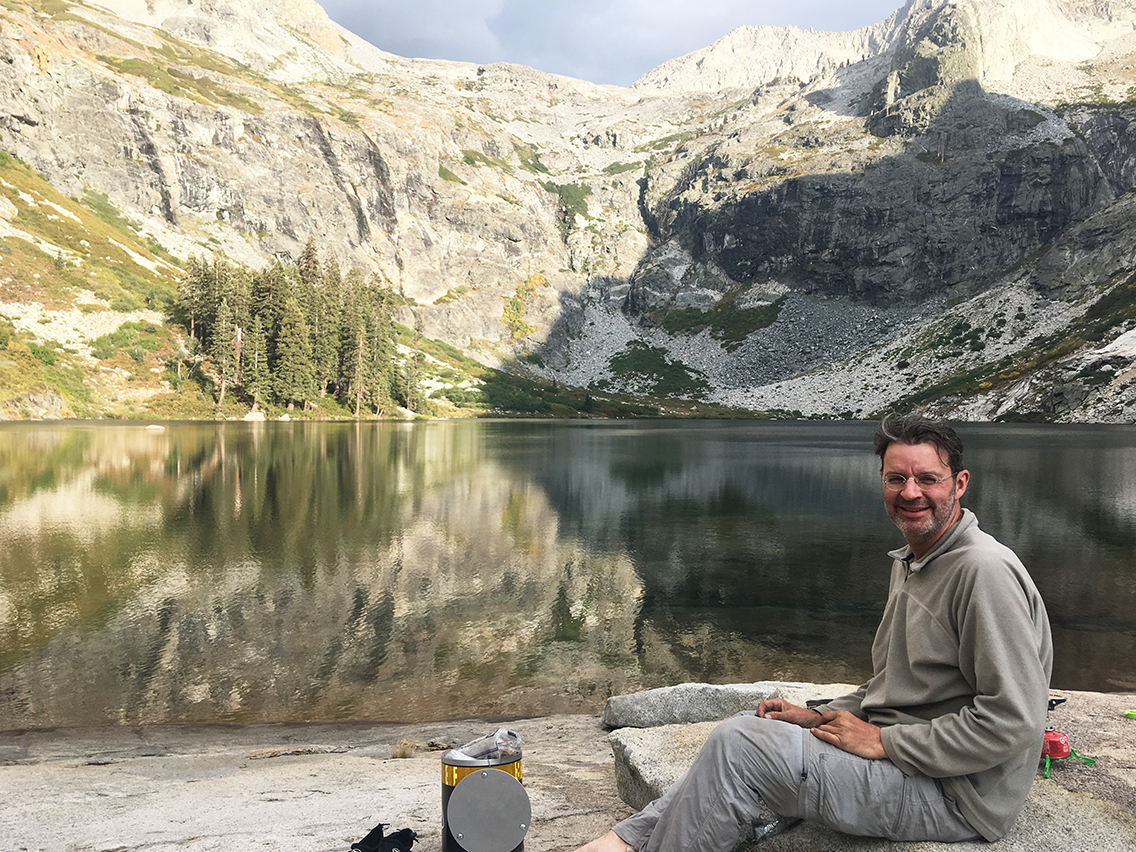 When I finally reached the lake, after after a 10.5 hour and 15 mile hike, the first thing I did was strip down to my underwear and jump in the ice cold lake from the small granite beach. I plunged right in and it was the best reward for this long day.
And I will never forget the dinner I had later on, with a view like this. What an amazing place to be.