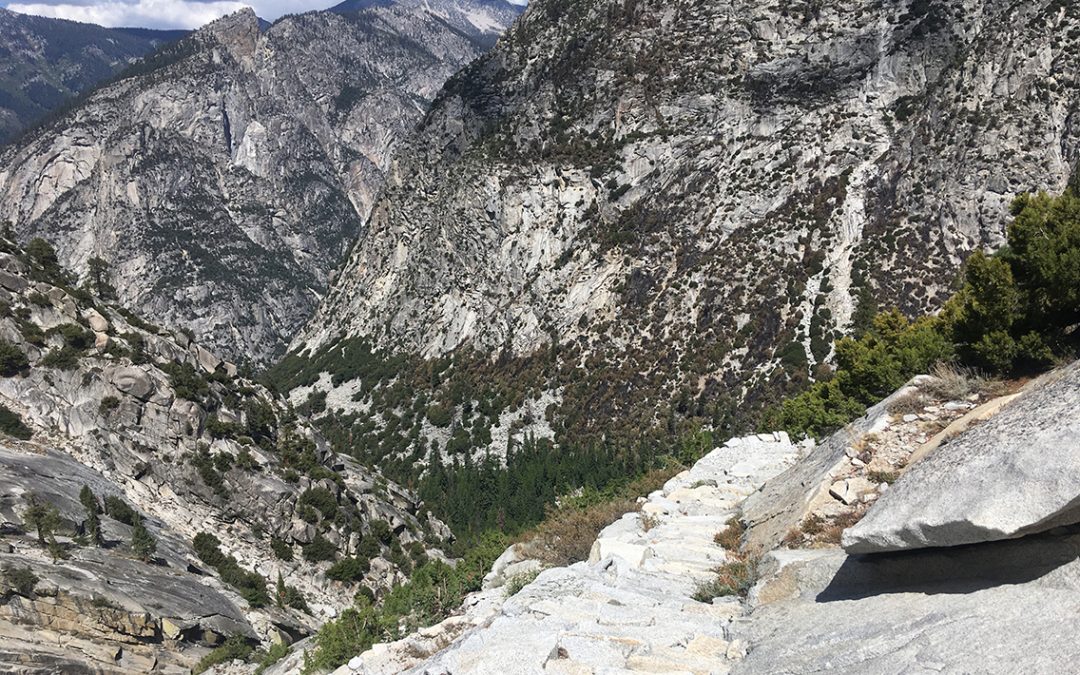 Day 8 – the final day of my SEKI Loop: back to Road’s End. A fairly easy climb up Avalanche Pass, back into the Kings River Canyon. But before I got there, I encountered a very steep surprise just before the cool waters of good old Bubbs Creek. 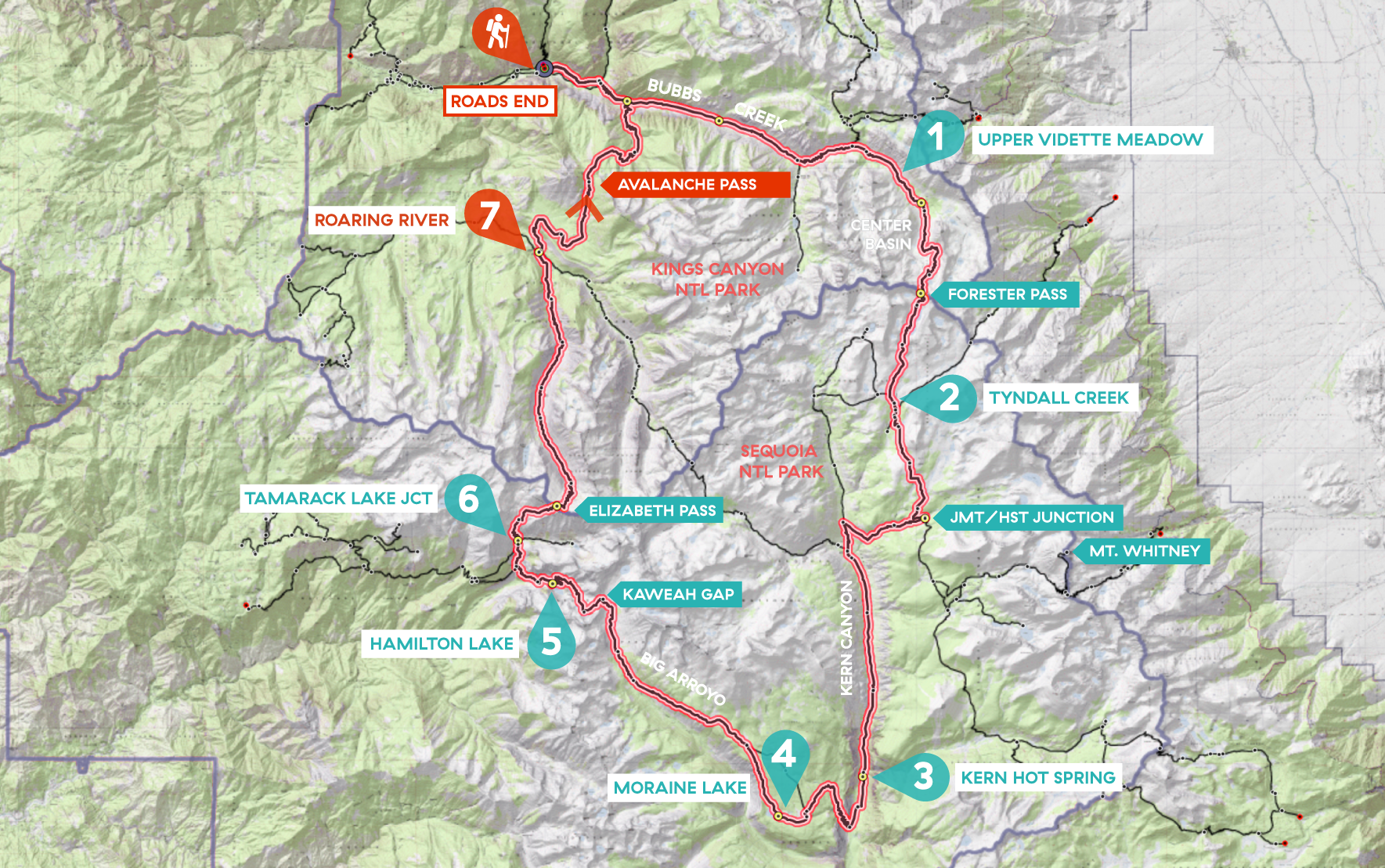 Day 8 of my SEKI loop, map base layer by Sierramapper.

Contrary to what I had imagined when I was planning my thru hike, I never had to set the alarm on my phone to wake up in the morning. Usually I would be awake at 5 am anyway, ready to get up. Just like this night, I woke up at 5 am and was on my way at 6 am, still in the dark. 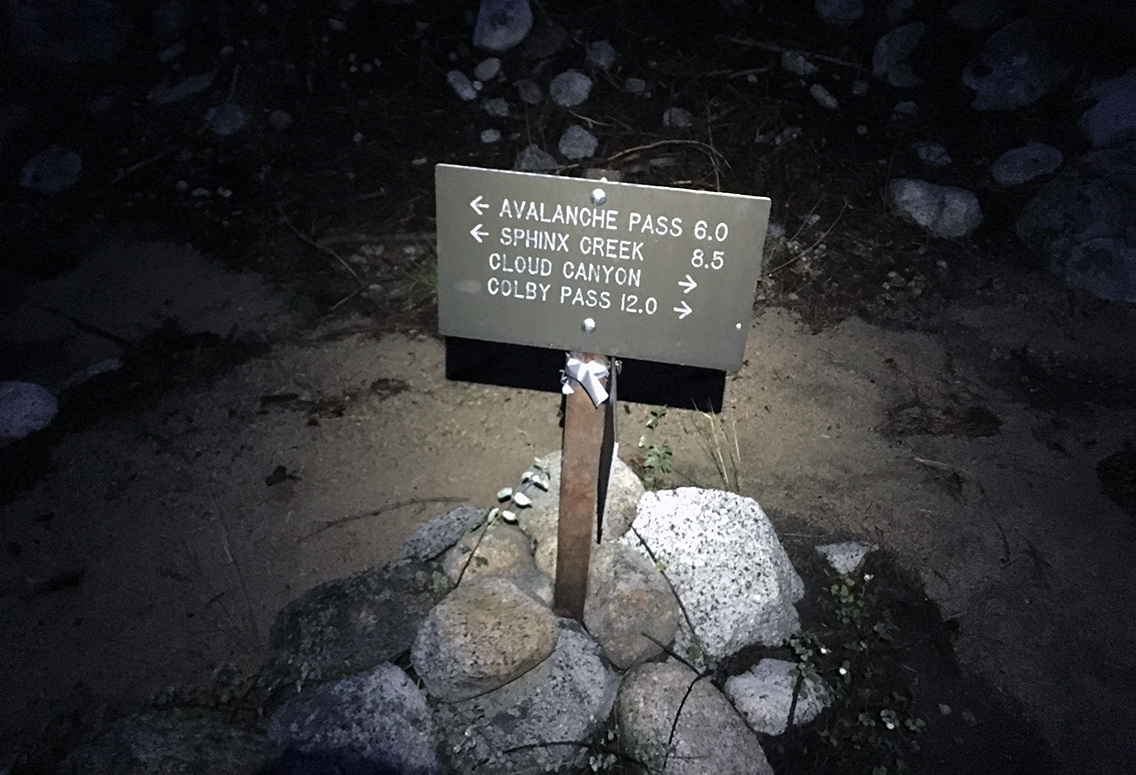 Because of the rain yesterday, I was kind of worried about new storms, climbing up the next pass. So I didn’t want to loose time in the morning: I had already filtered two and a half liters of water the previous night, and I had a Snickers Breakfast on the trail.
It was still very dark and quite cold on the trail as I searched for the signs with my headlamp. Up to Avalanche Pass, hoping I would not get lost (the trail was supposedly washed away before the pass).

After about 1.5 hours, somewhere along the Moraine Creek, I met the three girls who were also hiking up the pass today. As I started talking to them, one of the girls interrupted me – but I didn’t understand a word she said. As she repeated herself, I realized I had not recognized my own native language (Dutch), being used to talking exclusively English for a week! She and her friend were from the Netherlands, just like me. The third girl was from California, and together they had been hiking for 11 days, on a different SEKI loop: they came from Colby Pass yesterday. 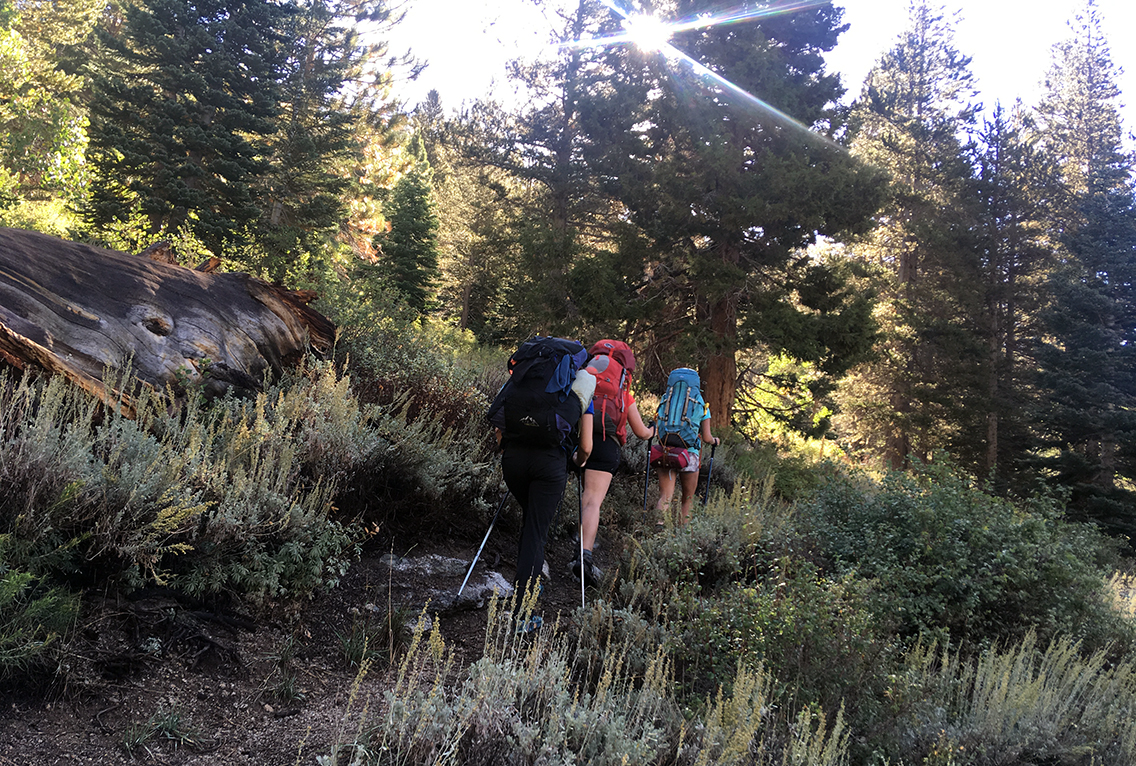 I spent some time chatting and warming up at their fire, while they packed their things. They agreed to hike together to the pass, and we hit the trail again. But damn – those girls were hiking fast! 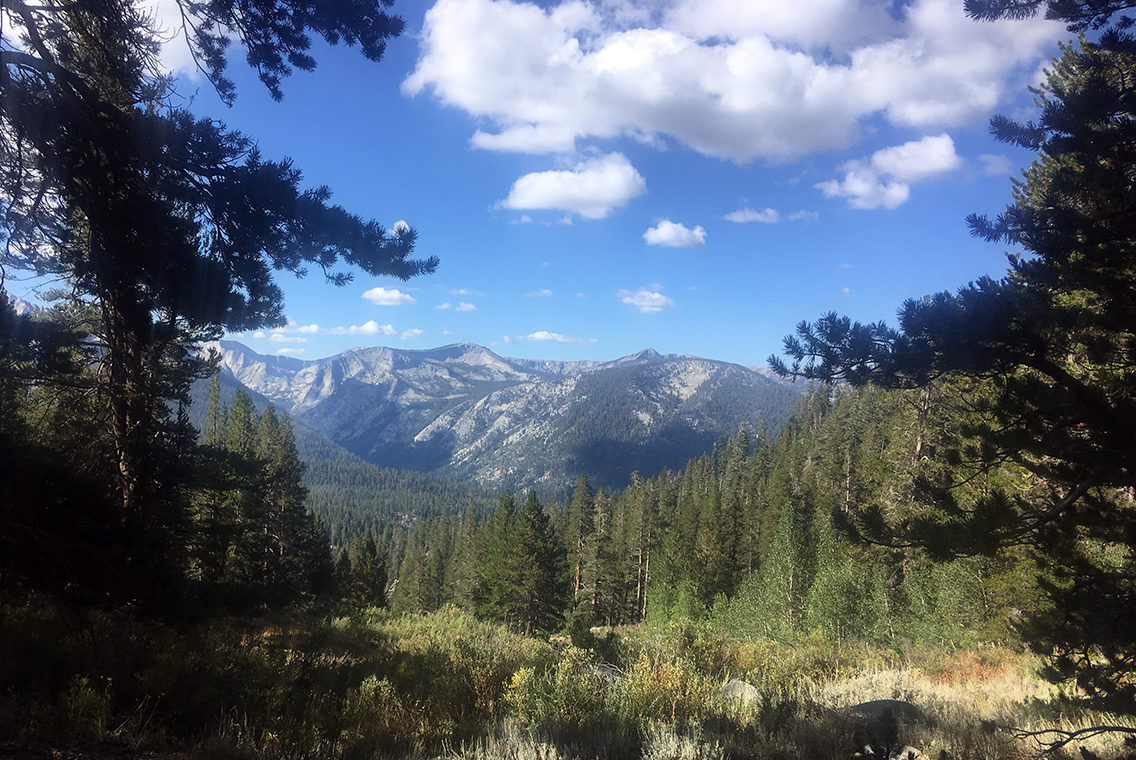 View of Sentinel ridge and sentinel dome, looking west from the trail, 5 miles into the hike.

Climbing up Avalanche Pass was easy – nothing compared to other passes on the John Muir Trail or the High Sierra Trail. The entire trail is below the tree line, not very high and has lots of shadow. 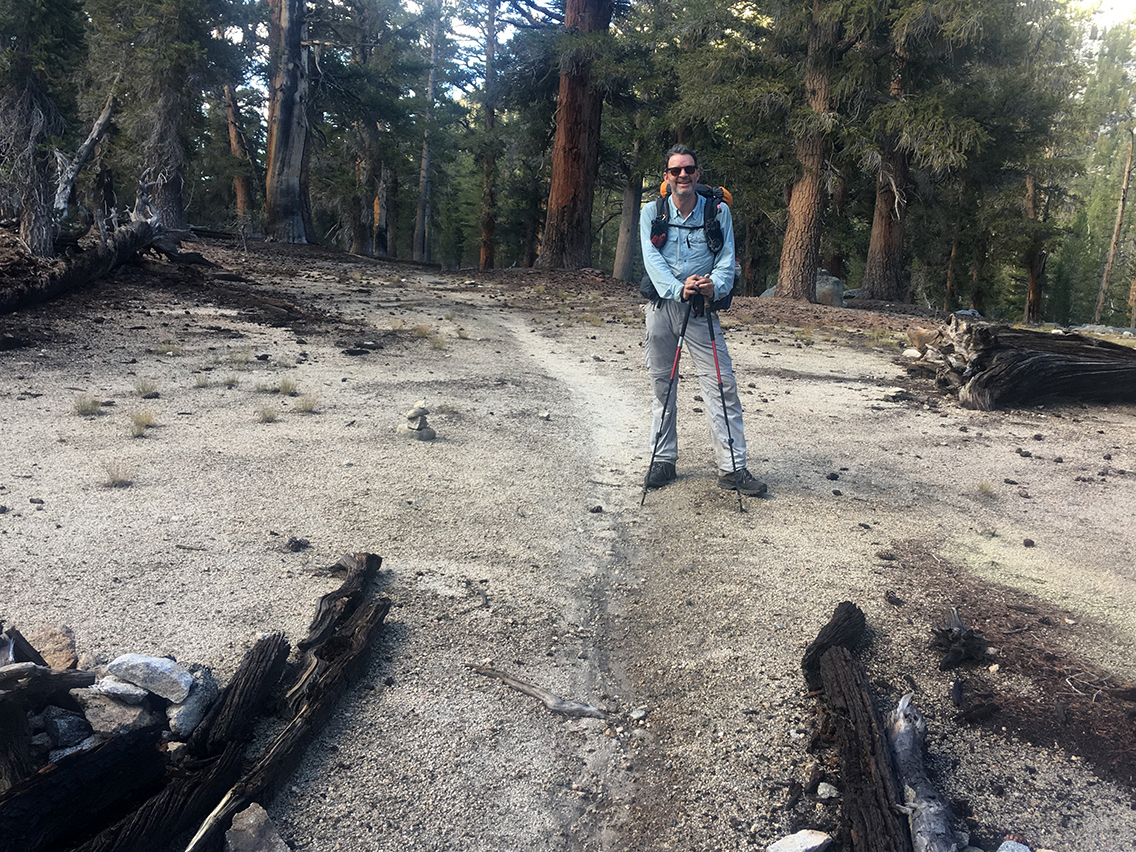 On ‘top’ of Avalanche Pass

Keeping up with the high speed of my hiking companions, we reached Avalanche Pass before 10 am. The trail was washed away indeed, but the pass being no more than an easy hill, there was actually no problem finding our way, especially since we had four pairs of eyes to look for cairns. The pass itself was marked, not by any sign, but by branches of burnt trees. 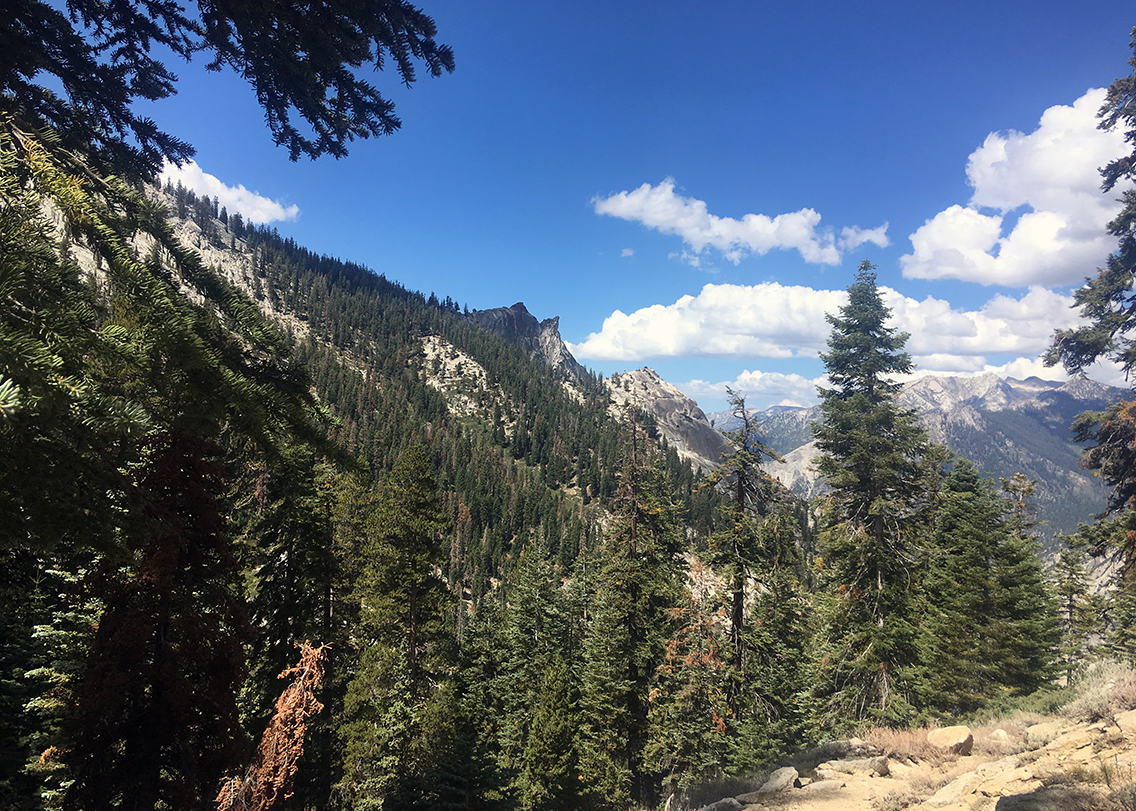 The Sphinx from the other side

The rest of the trail would be going downhill, and we all seemed eager to get ‘home’ as fast as we could. I already recognized the Sphinx, the prominent piece of rock that had also been visible from the Bubbs Creek Trail, on my first day.
The girls were still hiking way faster than me, so we said goodbye after a short break for rehydration drinks and M&M’s, a few miles below the pass.

Between the pass and Sphinx Creek the route drawn on the Nat Geo map is a bit off. The trail is still easy to find though, but when you’re using the Gaia app, you will notice you’re not on the dotted line for quite some time. 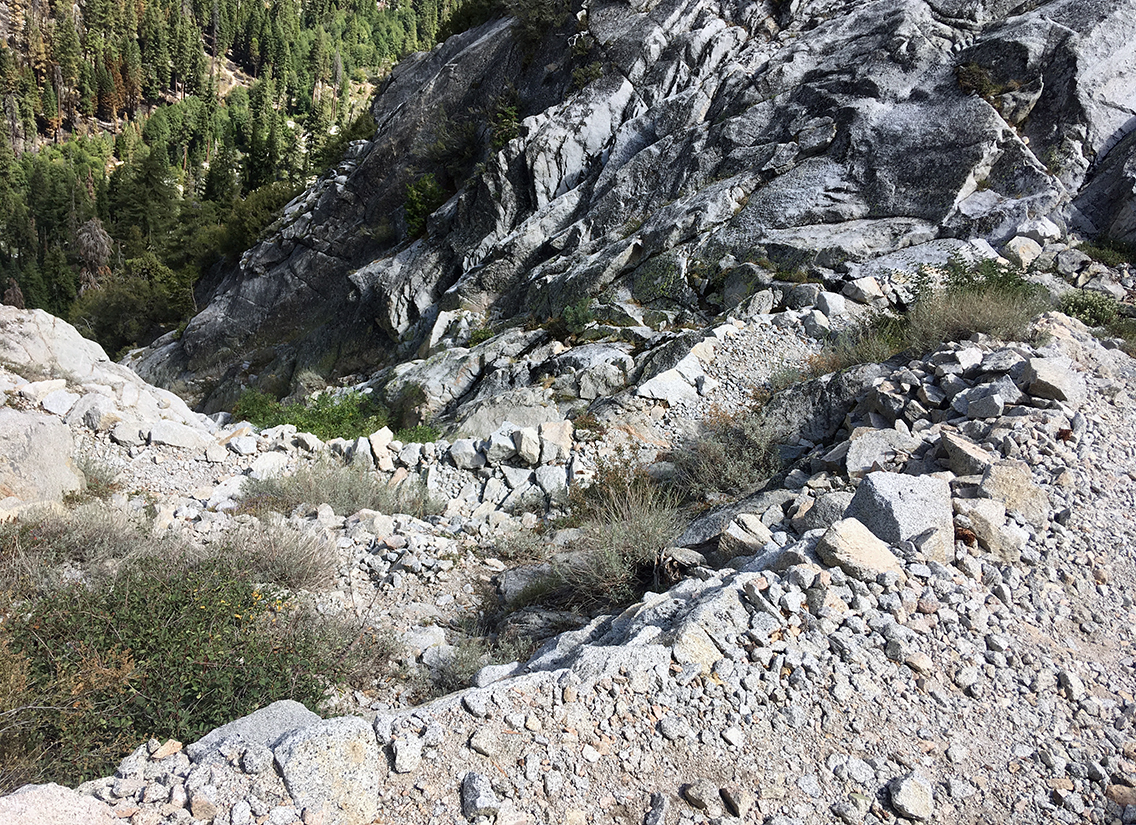 The trail had one final surprise: the very steep switchbacks that lead to the Sphinx Creek and Bubbs Creek confluence. Not only were they very steep, the steps each were so high, I needed both my trekking poles to support me every step. I was not looking for a knee injury on my last day on the trail. 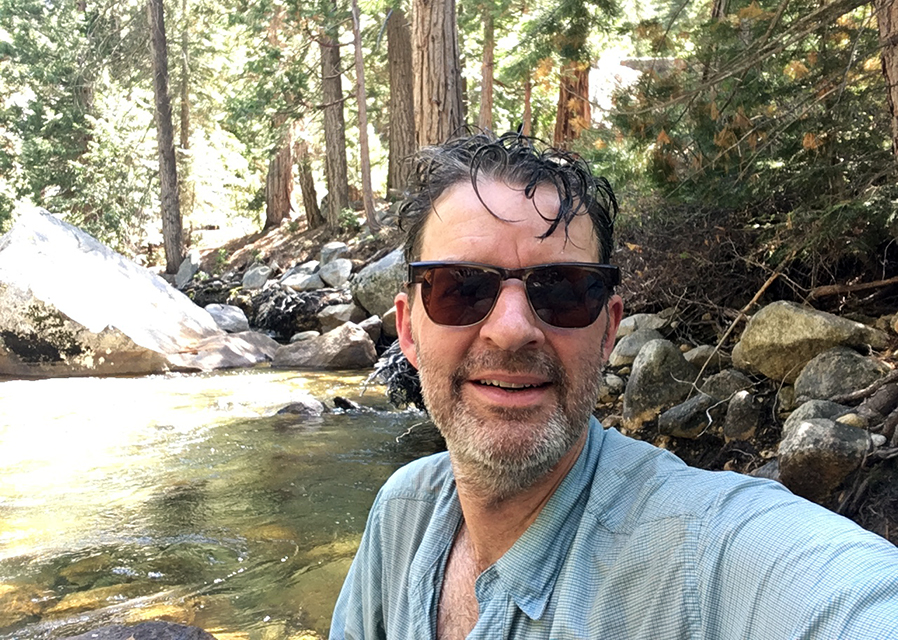 Down at the Sphinx and Bubbs Creek confluence
About an hour later, at the bottom of the switchbacks, I reached the confluence of Sphinx and Bubbs creek. There was a very nice, and empty, camp site near the river.  Almost tempted to stay here, I filled up on water in the creek. Today was actually the first day that I almost ran out of water, due to the extremely hot and steep climb down.
After filling up I let myself cool down in the cold creek for a while, before starting on the last section of my hike, the return to Road’s End. 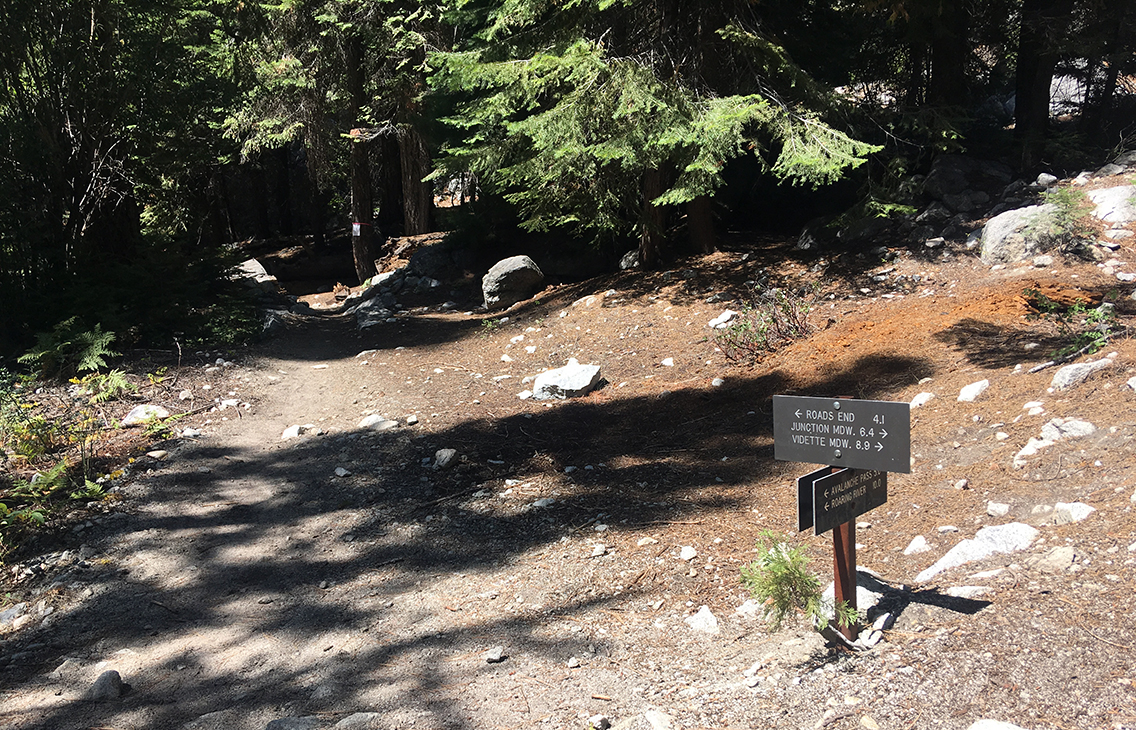 A few moments later I crossed the bridge to Sphinx Creek – Bubs Creek Junction. I was back at the exact same spot I reached on my first day. The next 4 miles I would be retracing my steps. But, in the mountains, the view is completely different, so it almost felt brand new to me.

When I recognized Kings Canyon from the trail, I felt happy and sad at the same time. And I really couldn’t understand how these 8 days had passed. It seemed such a long time, but also so very short.

When I crossed the Bailey Bridge again, the only metal bridge ont the trail, I knew I was very close. 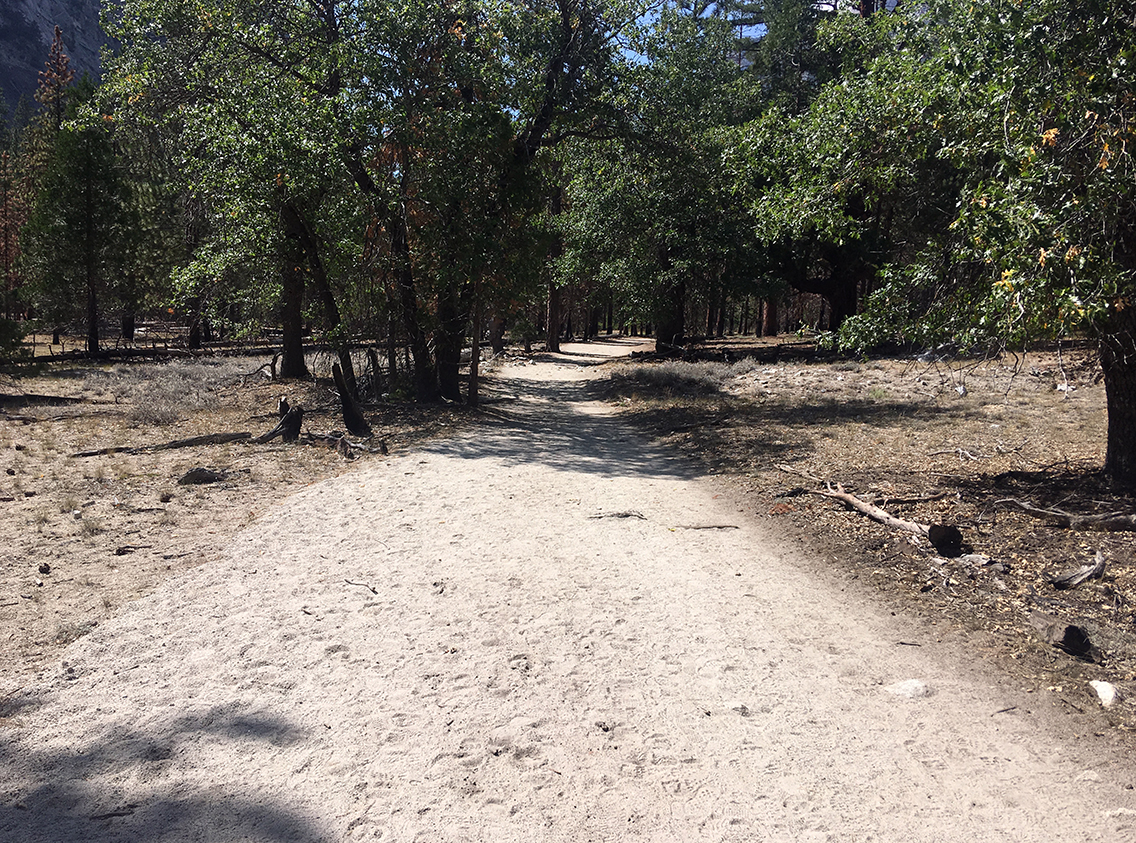 The last hot and dry mile on the Bubbs Creek Trail looks more like a highway! So many feet have trampled the earth here, it doesn’t resemble a normal trail at all.
I didn’t really mind, I was mostly thinking of the food I was going to eat, after my visit to the public showers at Road’s End. 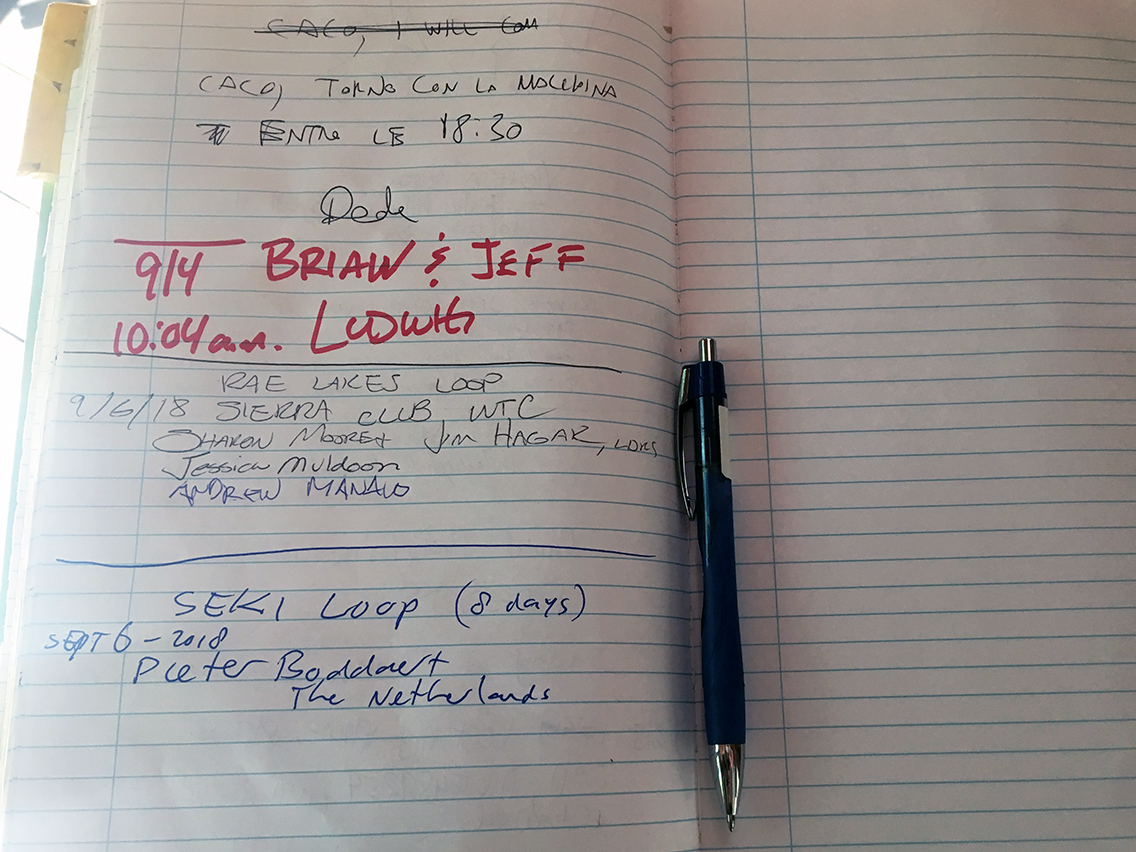 At 3 am I finally was back at the rangers station of Road’s End. No cheering crowds, no flowers, it felt kind of odd being back and noticing nothing really happened, nothing had changed.

I wrote my name in the big book as a proof and symbolic end to my trail. And I asked the ranger if she would take the last photograph of me, next to the sign, just like I started 8 days ago. 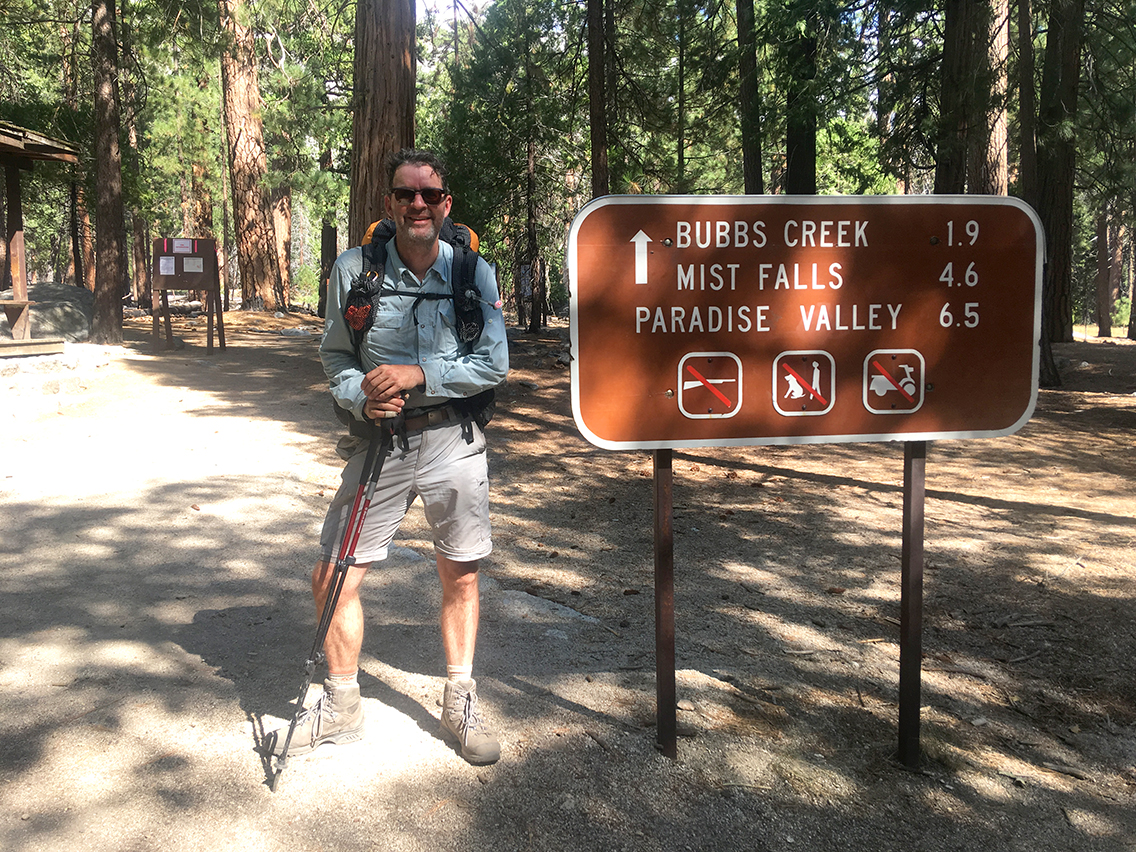 But who cares about statistics? I have been breathing the clean mountain air, I felt the sun on the skin of my forearms, slept alone in the wilderness. I met a bear, deer, marmots and some very nice people. I swam in lakes, drank from the creeks, sang songs, slept deeply –  I have felt so peaceful and happy these days, even when I was scared, tired, or when I felt homesick and lonely.