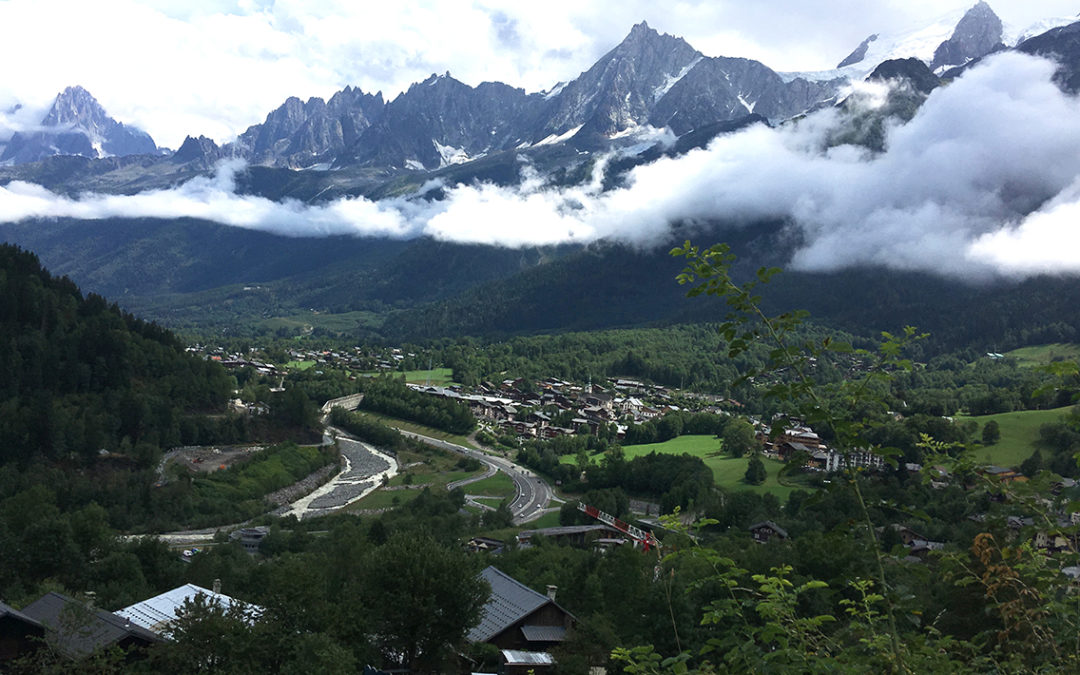 The first half day of the Tour du Mont Blanc I spent in an airplane and busses, until I finally got the the trailhead. Heavy fog made me change my plans already within 2 hours on the trail. 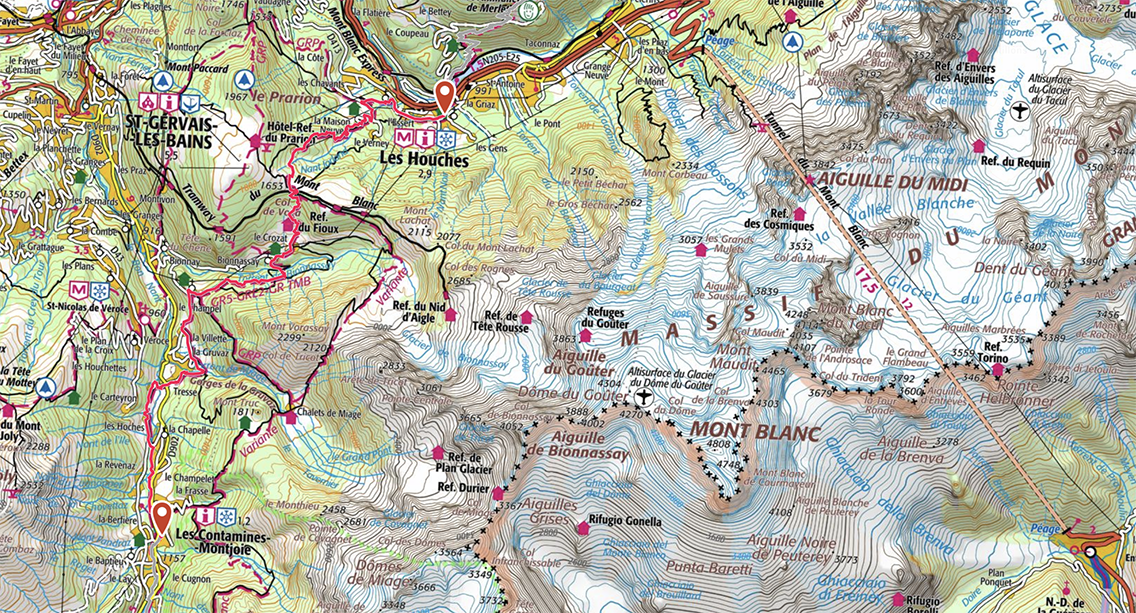 Getting to the Tour du Mont Blanc trailhead

I flew in from The Netherlands to Geneva, on a very early flight, so I arrived in Geneva before 9 in the morning. It was easy to find a shuttle bus to Chamonix: I asked at the transportation/hotel information desk at the airport and they could book me directly for the next bus. I asked about possibilities to take a train to Chamonix (I like trains much better than buses), but they said it would take much more time at a much higher price.
So for € 25 a Swiss Tour coach took me from Geneva Airport to Chamonix Sud. During this 1:30 hrs ride, the rain was falling quite severely and it got me worrying about my first day on the trail. Despite the heavy clouds, I could see a glimpse of the mighty Mer de Glace– glacier when we approached Chamonix. I would not see the glacier in its full beauty however for another 9 days.

The first thing I did in Chamonix was take a walk from the Chamonix Sud bus station tot the village center, which was really just 5 minutes up the main road. I found an outdoor shop (Technique Extreme) where I bought the small gas canister that I was not allowed to take with me on the airplane.

Back at the bus station I took the first ‘Ligne 1’ bus to Les Houches, for just €3 (tickets at the small ticket booth next to the bus stops). Here I met a young Irish fellow who had just quit the TMB, coming from Courmayeur, with feet full of blisters.

When I got out of the bus at the Mairie-bus stop – which is almost exactly at the official starting point of the TMB – it was already 1 o’clock, much later than I had planned. All in all the entire trip from the airport had cost me half my day. Still rather cloudy, but dry, I could finally start my TMB now.

The first goal I set in my mind now was to reach the mountain pass Col de Voza at 1.653 m, which meant a 640 m climb up. After a short walk on asphalt south, the real trail started with the wooden stairs at the ‘Grand Balcon’ apartments. 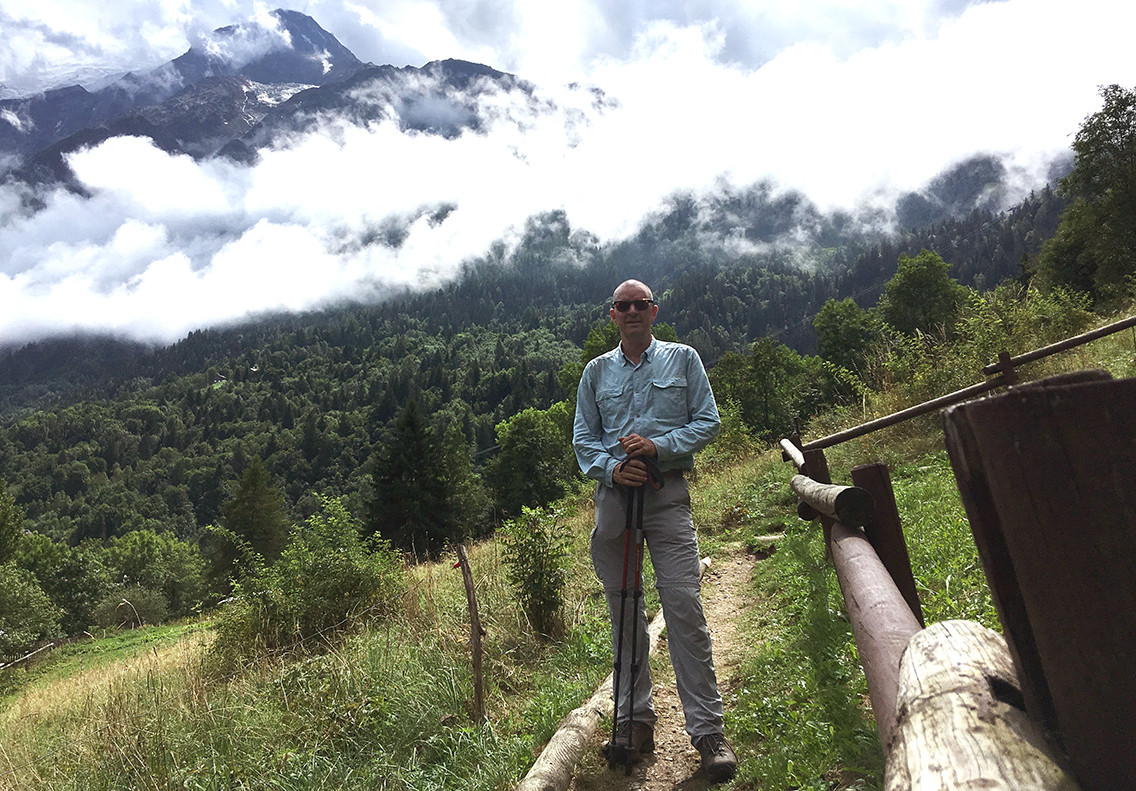 It was good to finally get out of the world of airplanes, busses and roads and step onto the dirt road in front of me. To me, this was the real start of the TMB.
The trail was quite steep at the start, but after a short climb it converged with the less steep main road again. The trail passed some houses along the road and then ran below empty ski lifts. Although it was still dry, the clouds obscured the valley and the surrounding mountains most of the time. No view of the Mont Blanc at all. After 1:30 hrs I reached Col de Voza. 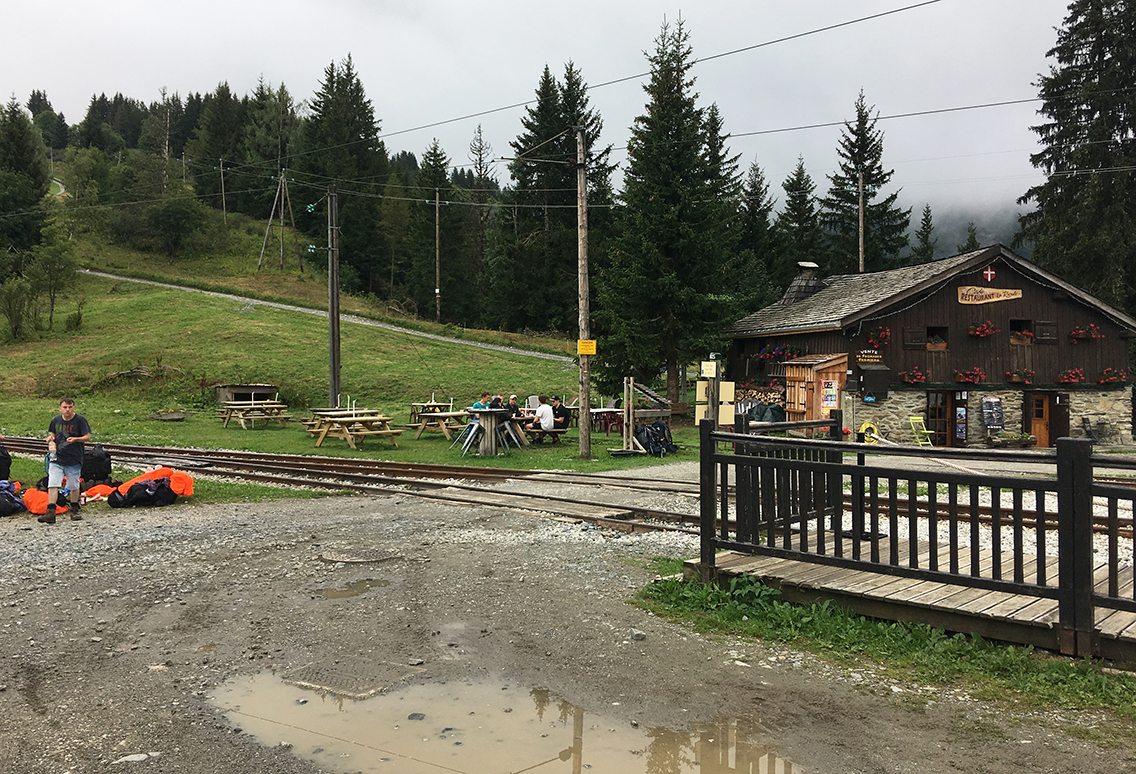 The col, still wet from the morning rain, was busy with groups of hikers: a lot of Asian tourists and many solo or duo hikers. The first thing I did was going into the tiny wooden restaurant on the other side of the railroad track, where I treated myself on a hot chocolate and a blueberry pie. This could pass for a lunch, I decided. Note: most TMB hikers are obsessed with food. Forgive me mentioning all my alimentary purchases during the tour.

Inside the restaurant for just a few minutes, the rain started, and it started seriously now. I talked to the very friendly innkeeper for a while about the weather forecast (another TMB-hikers’ obsession) and the 3 or 4 hour route I planned via the Col de Tricot to Auberge du Truc. He said that although that route would be possible to do in this weather, it would be completely useless, as I would see nothing of the views with the heavy fog and rain that was expected to last the rest of the day.

So I took his advice and, after the rain subsided just a little bit, I put on my backpack again and walked down the main route to the village of Les Contamines.

The next hour hiking down was very foggy, I could not see more than 20 meters in front of me. At least I had a chance to test my rain gear  (conclusion: although my very light Outdoor Research Helium HD rain Jacket is supposed to be breathable, I still got wet from both the inside and the outside). 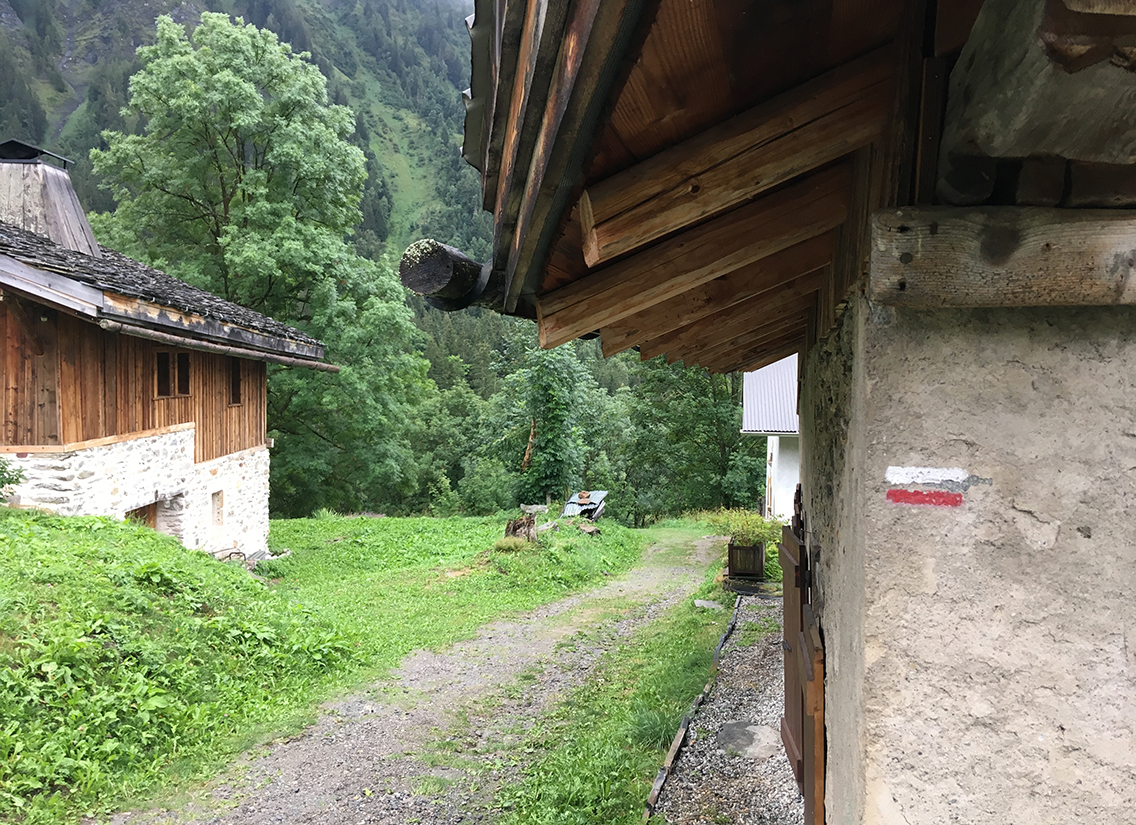 Moving on, the rain stopped and started again every now and then. The trail was extremely well marked, there is not a chance you would get lost on this part of the trail. It led me trough some nice little villages like Bionassay, with old houses and a small chapel next to the trail. 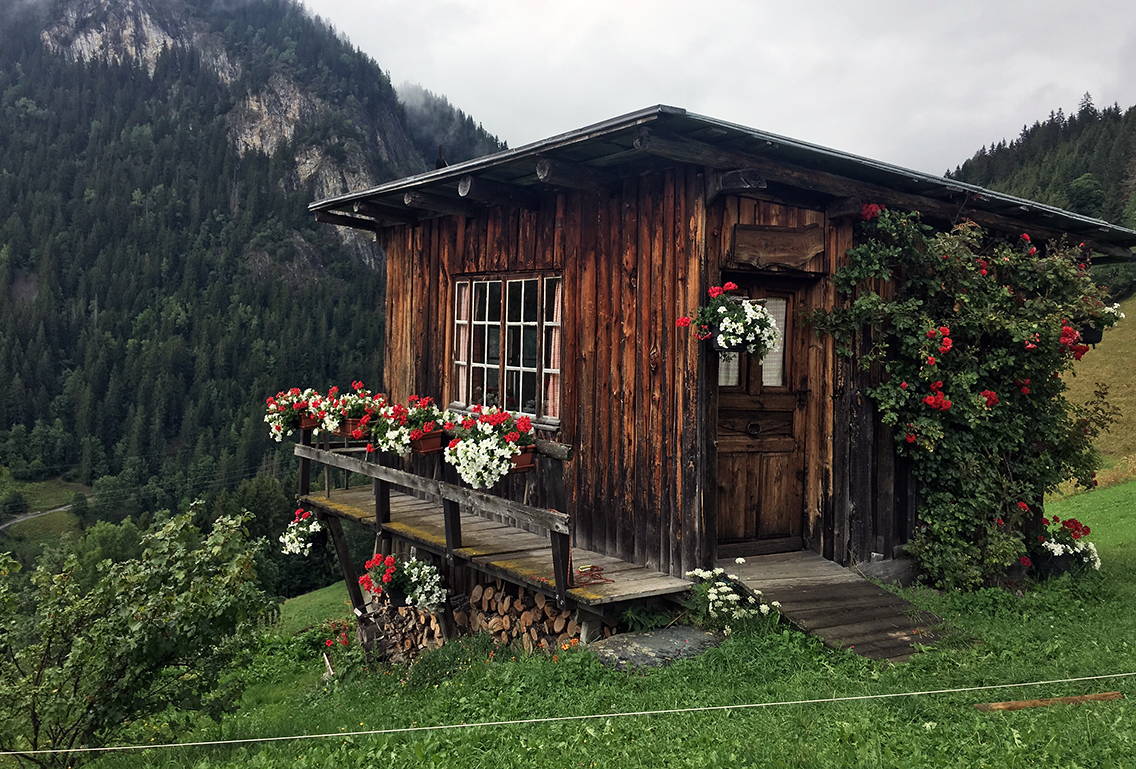 Another small village was Le Champel, where I saw this tiny little wooden house. At La Vilette I stopped at a water fountain to fill up on water and eat some of my snacks. Here I met to friendly hikers John and Grace, siblings from Los Angeles. I would meet with them on a daily basis the next 7 days. Although I was hiking much faster than them, I also took much longer rests, so we would keep on meeting. 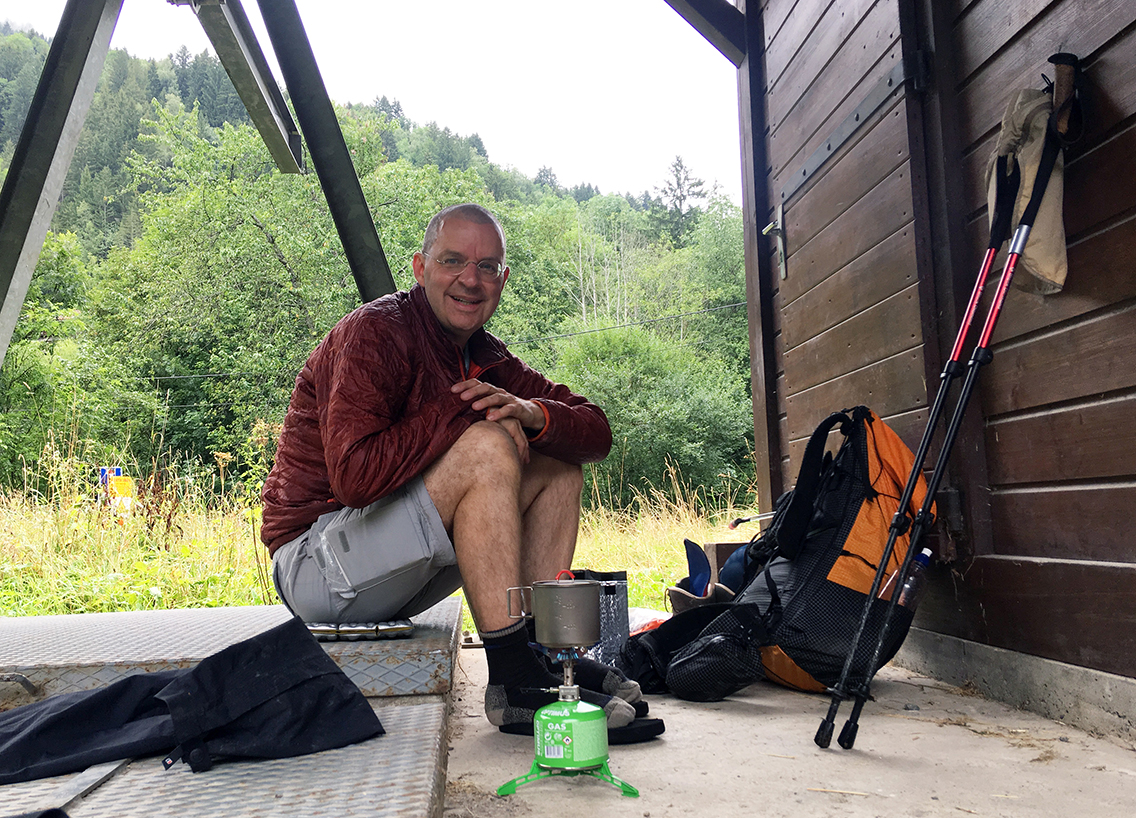 The trail took longer to complete than I expected. When it was almost 5 o’clock, I realized I already had a 12 hour day behind me (I got up before 5 a.m. that morning to catch my plane). Time to have something serious to eat! I learned from a sign that Les Contamines would be at least another 1 hour walk, so I looked for a good spot to have an early dinner. I found a spot with a roof above it next to the river Le Bonnant at a crossing called Le Quy. I cooked my water and prepared my freeze dried rice-cashew-lentils meal.
With new energy I hiked the last hour to the village. 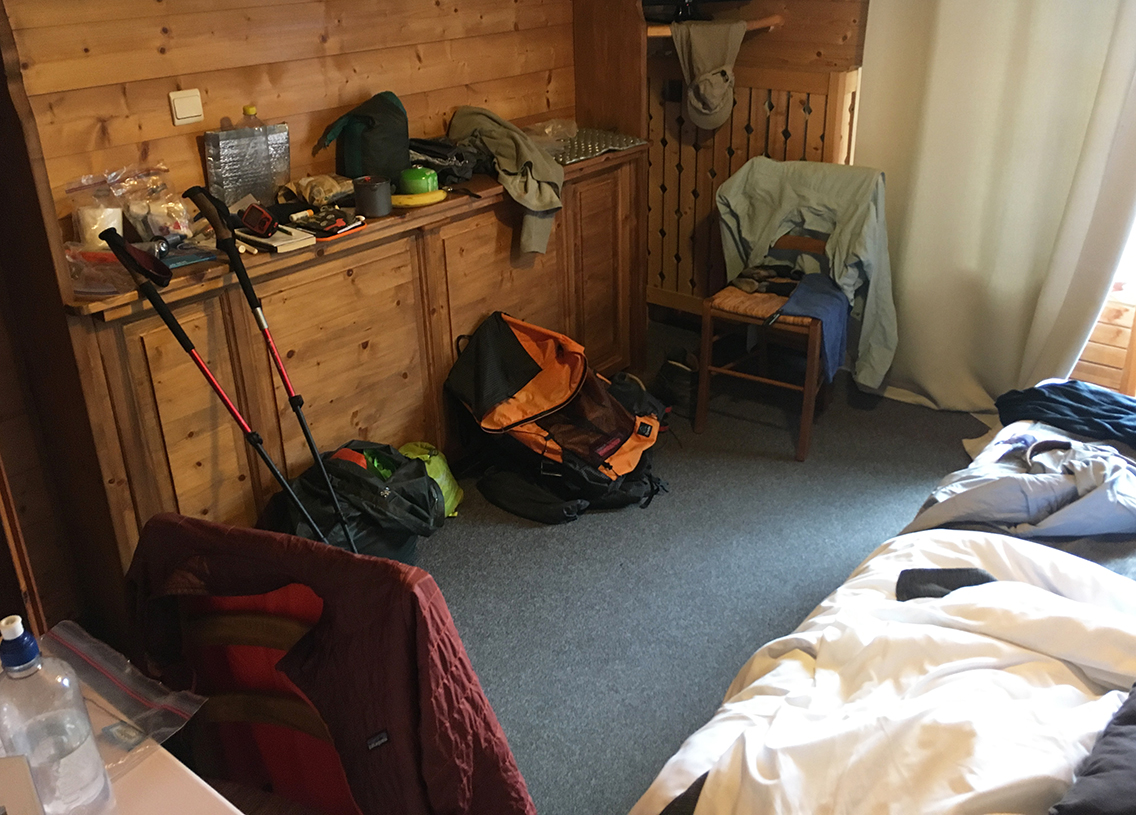 Usually I end my daily reports with a picture of my little blue tent in a campsite, but this first day was so wet, and I was so tired when I finally reached the village of Les Contamines, I decided to take a hotel room. Not what I planned to do, certainly not on my first day. But a hot shower, dry bed and a place to hang my wet clothing was the best end of the day I could imagine.