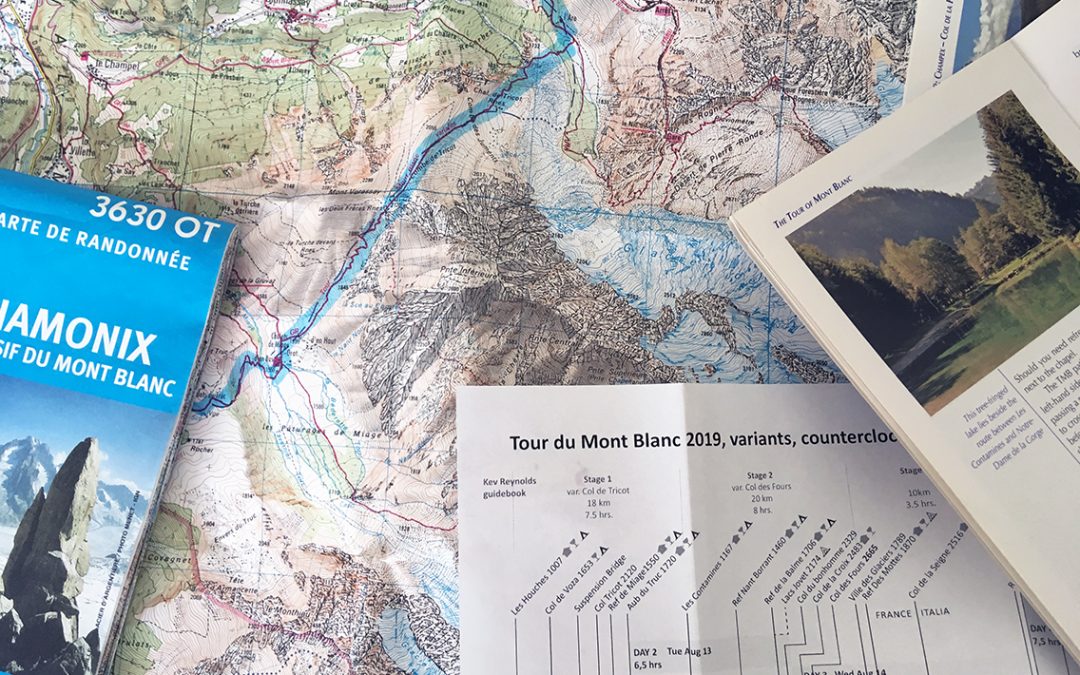 With a length of 172 kilometer / 107 miles the Tour du Mont Blanc (TMB) seems very similar to the SEKI Loop I hiked in California last summer (104.7 miles / 168,5 km).  But the altitude is much lower, the climate different and I also expect to see a lot more people on the trail this summer.

What is the Tour du Mont Blanc?

The first time I heard of the The Tour du Mont Blanc was when I was hiking in the Val Ferret area in Switzerland with my son in 2016. We actually hiked a tiny part of the TMB, as well as a popular side trip to the Fenêtre de Ferret. The giant yellow diamond shaped TMB-signs painted on the rocks were not familiar to me yet. When we got to the mountain farm and hut La Peule, I was struck by the special atmosphere of hikers coming up and down from the mountain and a seed was planted for a much longer hike into the surrounding alps. 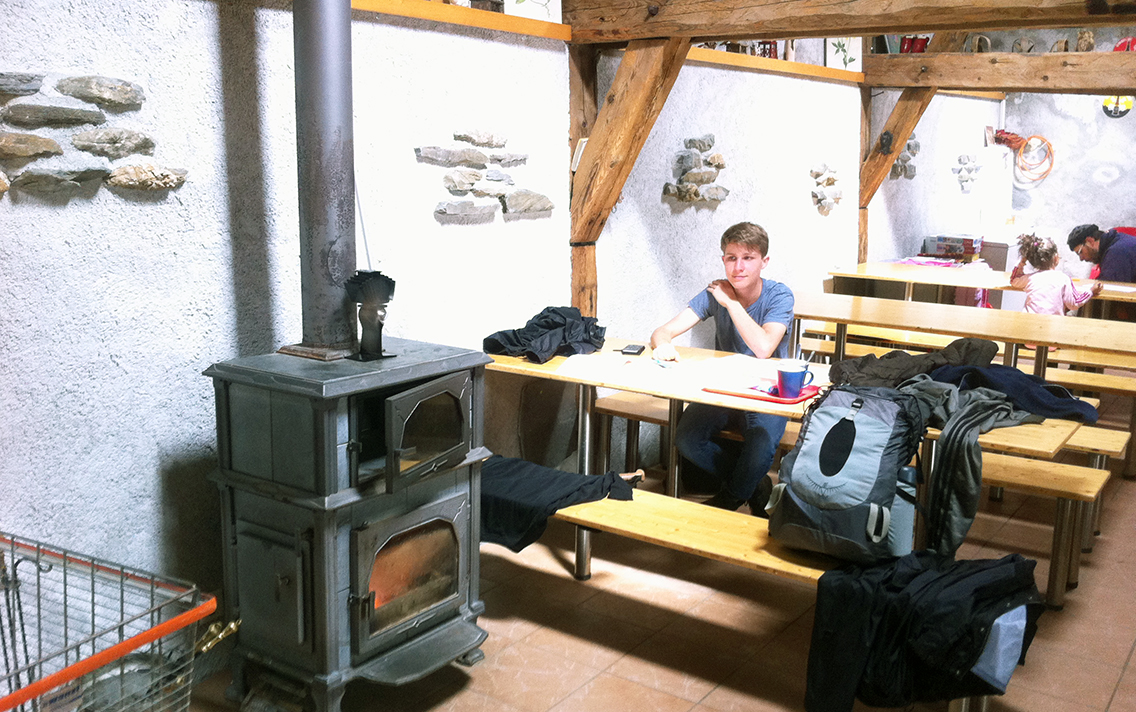 My son Melle inside of La Peule, July 2016 – drying our clothes at the fireplace.

The TMB must be one of the most popular thru-hikes in Europe, a continental variant of the John Muir Trail. The trail probably doesn’t need much introduction, so I will only highlight some of the main features and then focus on how I decided on the many choices I faced planning the TMB.

The TMB traverses the Alps through 3 countries (France, Italy, and Switzerland). You will need two different currencies (euro and Swiss Franc) and because English is not naturally spoken by people living here, be prepared to at least learn to say ‘Thank you’ in French and Italian.

Unlike the John Muir Trail for instance, there are various ways to hike the TMB. A man could probably hike the TMB 3 or 4 times, and experience a different hike each time. In planning this hike, you have to make 5 main decisions: starting point; direction; variants; number of days and, last but not least: where to stay? Planning the tour is done best with the two paper maps on the wall or on the floor, to get a good feeling of directions and distances.

Where to start the TMB?

The TMB traditionally starts in the Chamonix Valley, France, just 7 km (4 mi) south of Chamonix in the village of Les Houches. But the TMB being a circulair trail, you could actually start anywhere. The distance to the airport, or wether you will be driving a car or travel by train, are to be considered in choosing the starting point. For a while I considered Champex, Switzerland as a start, but coming from the airport of Geneva, Les Houches is just a bit easier to reach by train.

Another thing to consider is: do you want to save the harder and more spectacular parts of the trail for the end? The trail south of Les Houches, as well as south of Champex are the less demanding parts of the trail, while the Fenêtre d’Arpette must be one of the toughest. All in all, I decided on Les Houches a my starting point.

TMB-Direction: Walk Around the Clock

Most people walk the TMB in anti-clockwise direction. This means that if you go anti-clockwise yourself, you will encounter the same hikers most of the days at the start and end of your day. This can be a good thing or a bad thing, depending on your own preferences. Also you will have hikers in view in front of you most of the time. Going clockwise however, the trail before you will be empty in the morning and evening, but you will have to say hello to many many people walking towards you during the day.
More than this social aspect of the direction, you have to consider the ascends or descends to encounter in either direction. For instance, starting clockwise in Les Houches, will require a very steep and high climb of Le Brévent on the first day.

So already having chosen Les Houches as my starting point, going anti-clockwise seemed the wiser decision for me, although I would have liked a bit more empty trail. 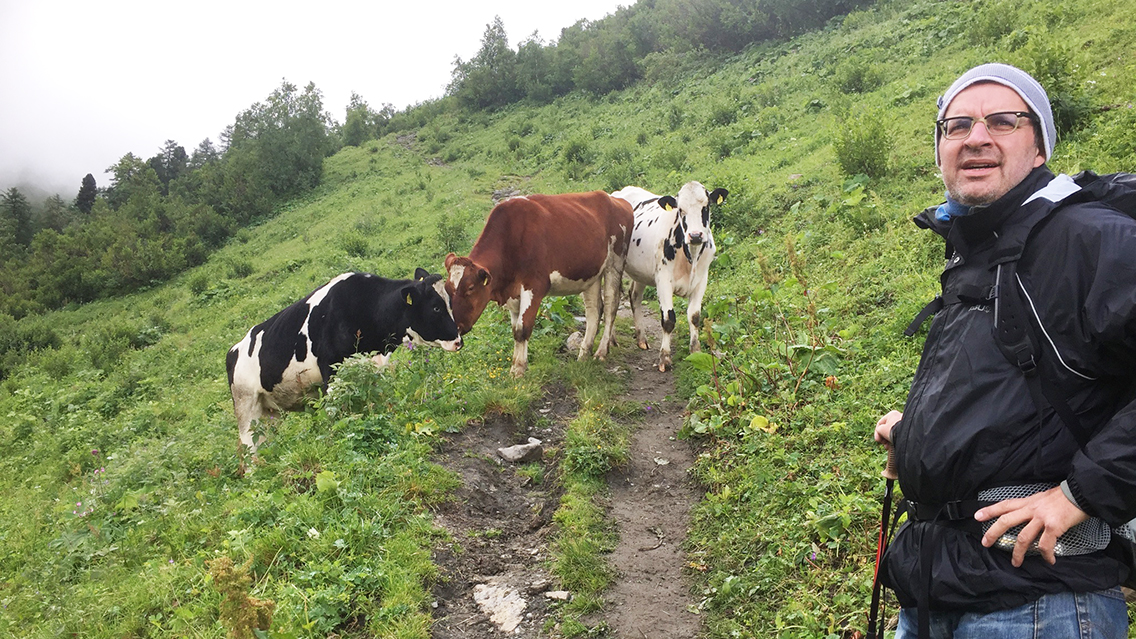 Variants of the TMB

With the many variants comes the fun part of planning. A lot of the more challenging alternative routes of the trail are known as variants of the TMB. The main variants are in Kev Reynolds guidebook, as well as on the maps. As a rule fist you could say: the main TMB follows the valleys, the variants the higher elevations. This means that choosing a variant, you will see less people, but also have less opportunities for getting food and lodging. The higher elevations also require a greater physical strength.

The main variants that I plan to hike are the Col de Tricot variant from Les Houches on the first day and the Col des Fours Variant on day 2. On the second day I will deviate from the trail even further to the Lacs Jovet, a group of remote lakes just north of the trail from refuge La Balme, and try to set up camp there.

Later on the trail I plan to hike the Fenêtre d’Arpette variant, over a 2.665 m high mountain pass,. My last night I hope to spend at the Lac Blanc, thus avoiding the infamous ’ladder-section’ above Tré-le-Champ. I have a fear of heights and am not looking forward to climbing the steep ladders in that section. But also I have read that the Lac Blanc is one of the most beautiful lakes on the trail.

How Many Days to Complete the TMB?

The TMB can be hiked in any length of time between one or two weeks, of course depending on your physical health, training and personal preference. The average number of days seems to be 11; Kev Reynolds guidebook divides the trail in 11 stages. Last summer I hiked 104.7 miles / 168,5 km in the High Sierra in 8 days. With a bit more ascends on the TMB, 9 days seems to be a reasonable stretch of time to complete the tour. I calculate 1 extra day before I have to catch my plane back to the Netherlands.
The number of days on the TMB is closely related to the question: where to stay? Staying in huts, or hotels in the little towns, means carrying less weight and less time needed to set up camp. Camping might give a more flexible approach to the entire trek, but you will need some wiggle room to change plans.

Planning your own TMB: be aware of the yearly Ultra TMB Marathon that is held at the end of august (in 2019: august 25). You definitely don’t want to be hiking the TMB with thousands of runners around.

The Tour du Mont Blanc is, like all alpine treks, designed as a hut-tour. A hut, or refuge/rifugio, offers a bed, water and food. Lodging is often very simple, with sometimes no showers or only cold water available. With rising popularity of the TMB though, huts can get crowded, and they are quite expensive. Combined with meals, the costs can be as high as a € 100 per night. The greatest advantage of the huts is, of course, that you won’t have to carry a heavy pack. Just a sleeping bag liner, rain gear and some fresh clothes will do. A great disadvantage to me, apart from the high costs, is the necessity of making reservations weeks or even months before. This eliminates all spontaneity of a thru hike and the possibilities of changing your route at the last moment because of bad weather, or when you want to hike a specific side trail that comes along. 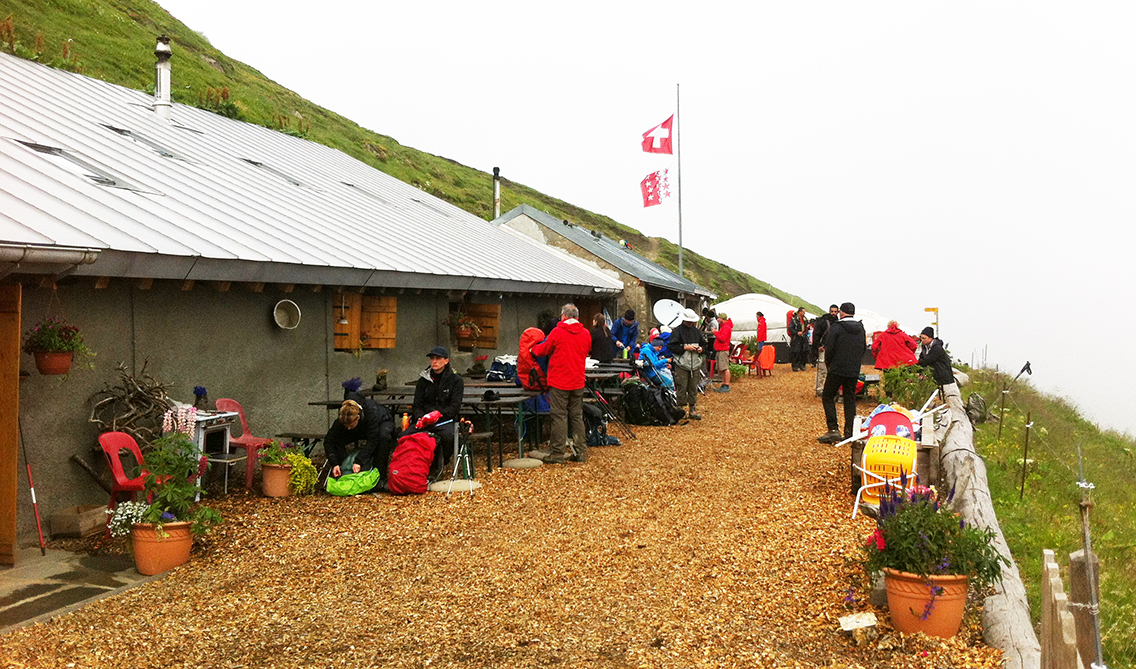 Mountain farm and hut La Peule has dormitories and 2 yurts where hikers can sleep.

Trying to camp on the entire TMB is quite challenging though, especially when doing many variants of the trail, surpassing convenient little towns with campsites. Wild camping is, as a general rule, not allowed. In France though, it is permitted to ‘bivouac’ on public lands (on private lands only with the owners’ permission – learn French first!). ‘Bivouac’ means camp off the trail, pitching your tent after sunset and breaking up before sunrise. As I like to get up early on the trail, this would be no problem for me. Furthermore, some huts will allow camping near the hut, when asked politely.

In Italy, the situation is a bit more complicated. Wild camping is not allowed at all below 2.500 m elevation (which is practically everywhere near the trail), and huts like Bonatti are very strict in keeping tents off their grounds. Add the fact that there are very little official campsites on the Italian section of the TMB anyway, this forced me to plan long days and limit the nights in Italy to only 2. One near the Rifugio Elisabetta and one off the trail in the valley.

In Switzerland wild camping is, just like in Italy, permitted only above an altitude of 2.500 m, although in my experience when you stay off the trail, away from villages and practice Leave No Trace Principles, a bivouac is generally no problem. On the other hand, campsites are more abundant on the Swiss section of the trail.

It seems that in general camping is discouraged on the TMB, but with the help of many bloggers found on the net, I was able to compile a rather complete list of camping possibilities along the trail. Sometimes official commercial campgrounds, sometimes a spot near a hut, and other times just a try and hoping for the best. Below in my elevation profile is a complete list of camping possibilities.

In my planing below I focussed on the required walking time, not the exact distance. Distances in the Alps are typically measured in hours, not kilometers. The yellow signs on the trail never mention the exact distance, only the time required, as seen on the huge signpost below in La Fouly, Switzerland. 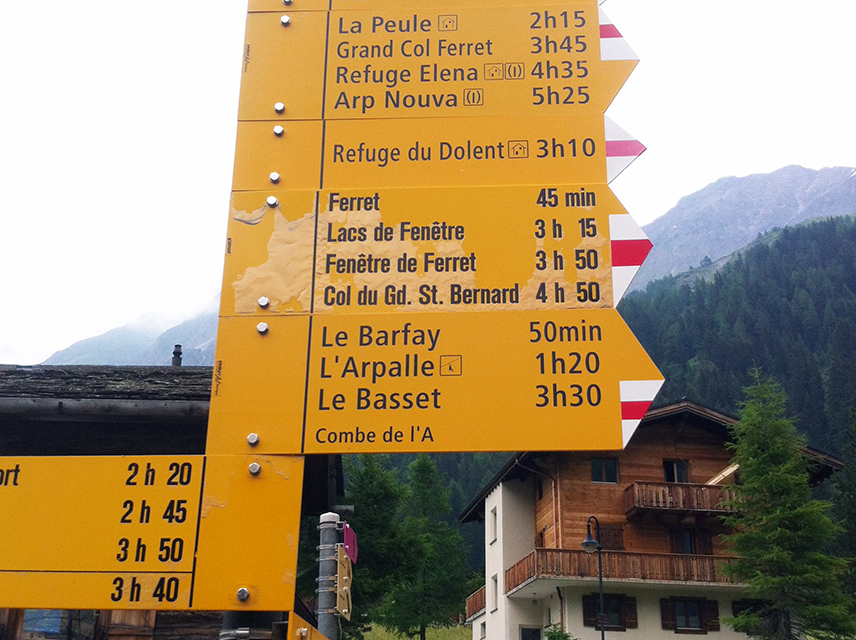 For now, this is my day-to-day itinerary.

My self made elevation profile of the TMB

More than a map or GPS-device, I have used the elevation profiles as my main guide during a my previous hike. When a trail is signed very well, there is not much need to look at the map for orientation and way finding. What you want to know while hiking is how much elevation you will have to gain, when you will descend again and a quick glance to the distances to the main points of interest. For my hike in the Sierra Nevada, I used the online tool of Sierramapper. For the TMB I designed my own elevation profile, and I added all the information I could find about camping on the trail.

There is a wide collection of books on the TMB, but like most hikers I used Kev Reynolds book Tour of Mont Blanc, Complete two-way trekking guide by Cicerone Press. 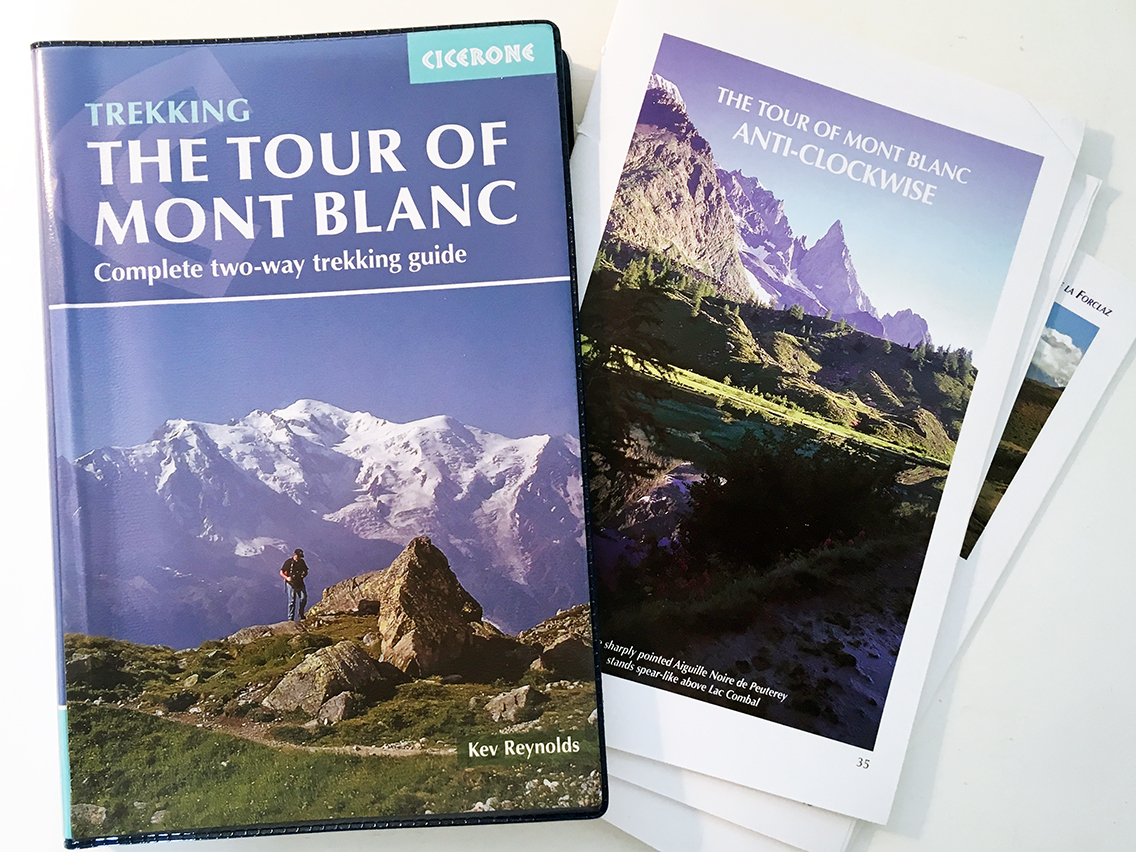 My copy of Kev Reynolds book with the ‘anti-clockwise’ parts conveniently ripped out, which saves me 200 gr. / 7 oz. of weight.

Read the report of my TMB day 1