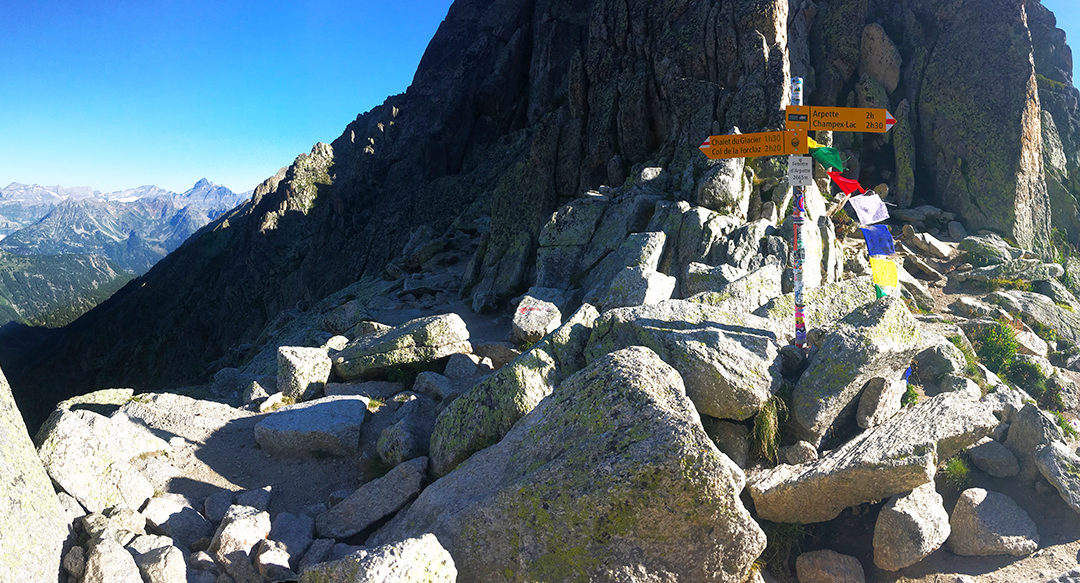 Day 7 of my Tour du Mont Blanc was the most impressive day of the tour, and one of the most spectaculair hikes I have done. More than a 2.000 meters up and down a very steep and rough trail, with an hour of scrambling boulders… and sometimes no trail at all. 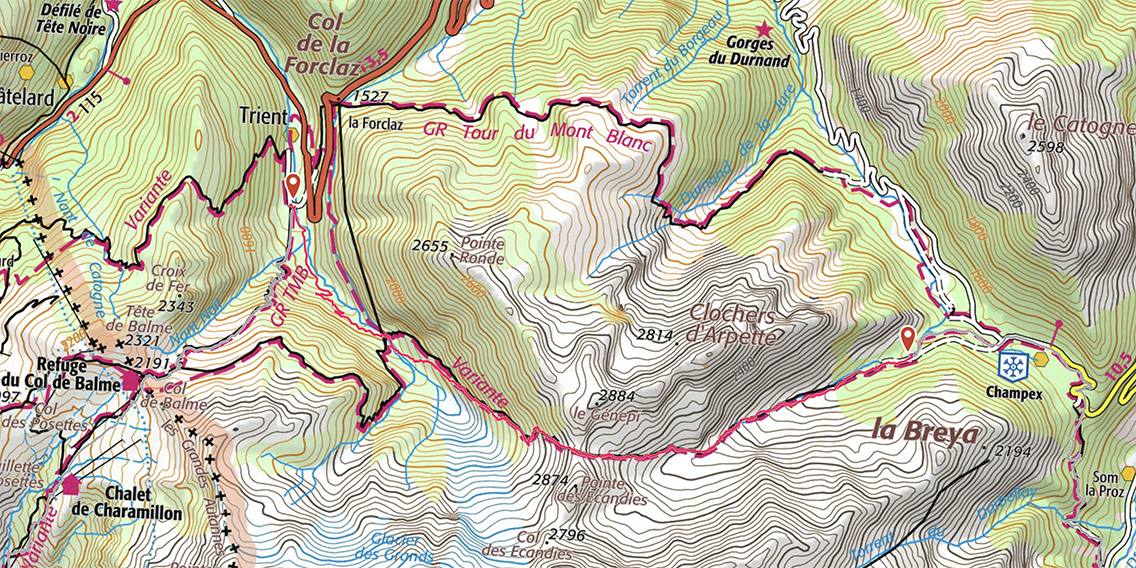 I woke up at 4:45 a.m., just about the time that I planned yesterday. I wanted to make an early start and reach the Fenêtre d’Arpette before the sun would heat up the trail. I packed my backpack and had a cold breakfast on a wooden bench inside the building, next to the showers. I did not want to lose time heating my food, so I had a cold muesli breakfast and a cup of water with Skratch hydration lemonade powder, to boost my powers. At 5:30, still in the dark, I was on the trail again. 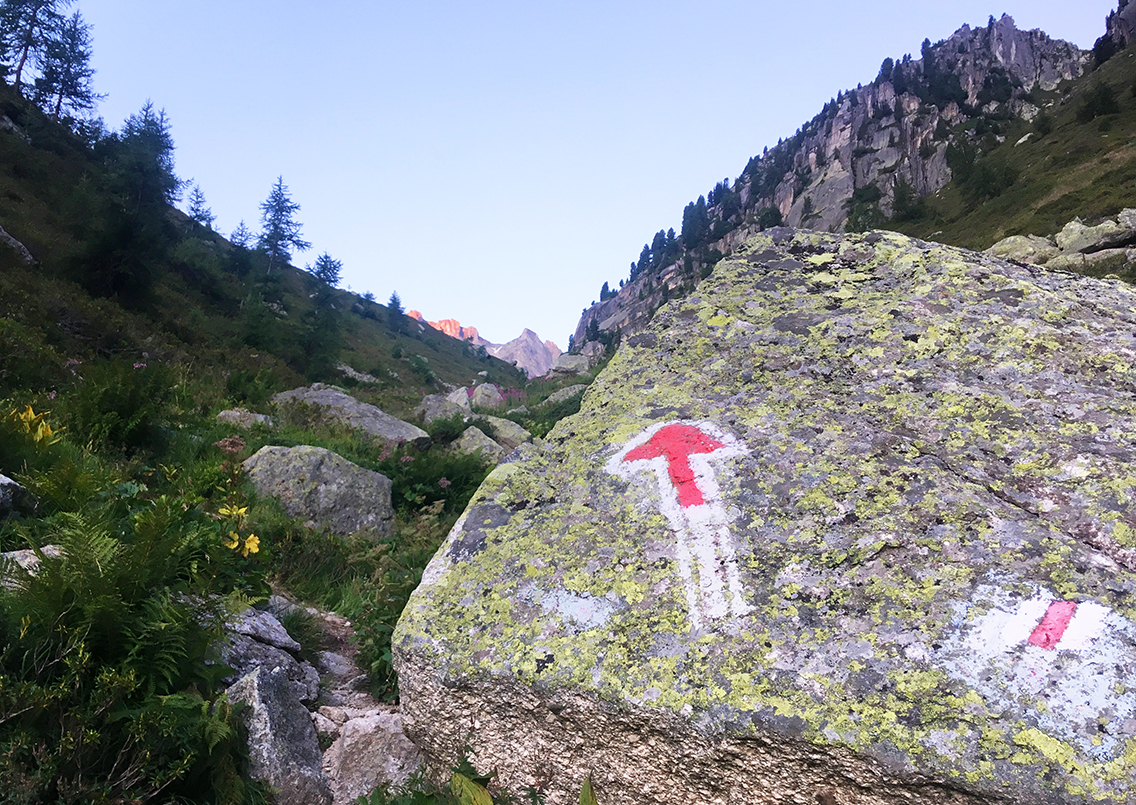 The first part of the trail I passed some houses, but soon the road ended and I came to a gate to a more open area. Wearing my headlamp, I could only see a few yards in front of me. It was not until  6 a.m. when there was enough sunlight to switch it off. The area was green, rocky and a bit steeper now. The silence and the cold morning air, with views of the mountain ridges really filled me with joy. It takes some self discipline to get up early, but it has such good rewards. 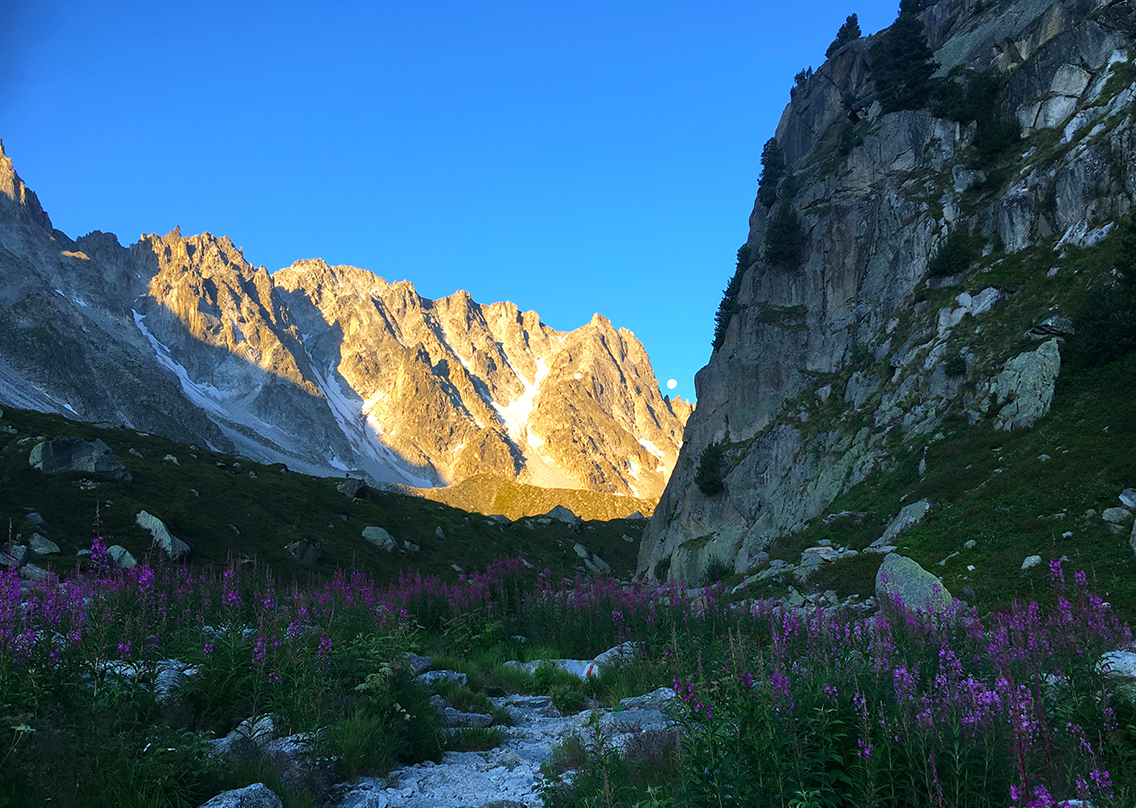 Val d’Arpette in the first rays of sun

At one moment, looking east I saw the sun rising over the mountains, and, turning around, I saw the moon just at the edge of what must be the Col d’Ecandies. The trail was still in the shadows, but the high part of the valley in front of me was bathing in the sunlight. 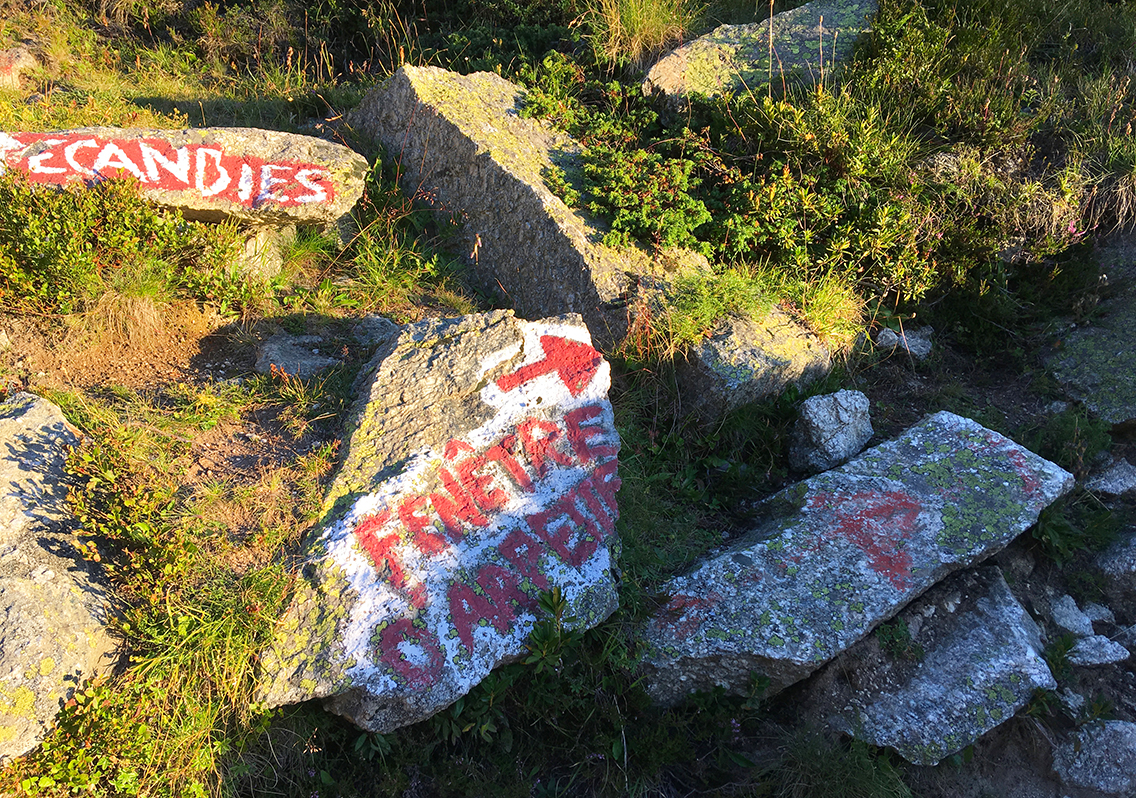 The trail is very easy to follow, there is only one critical point, where the trail bends right. Going straight on would bring you to the Col d’Ecandies.

A few tents were pitched on a small fat area here, the hikers still asleep inside. This really wase a good wild camping spot, but, at just about 1 hour distance from the Relais, I would personally prefer the official campsite. 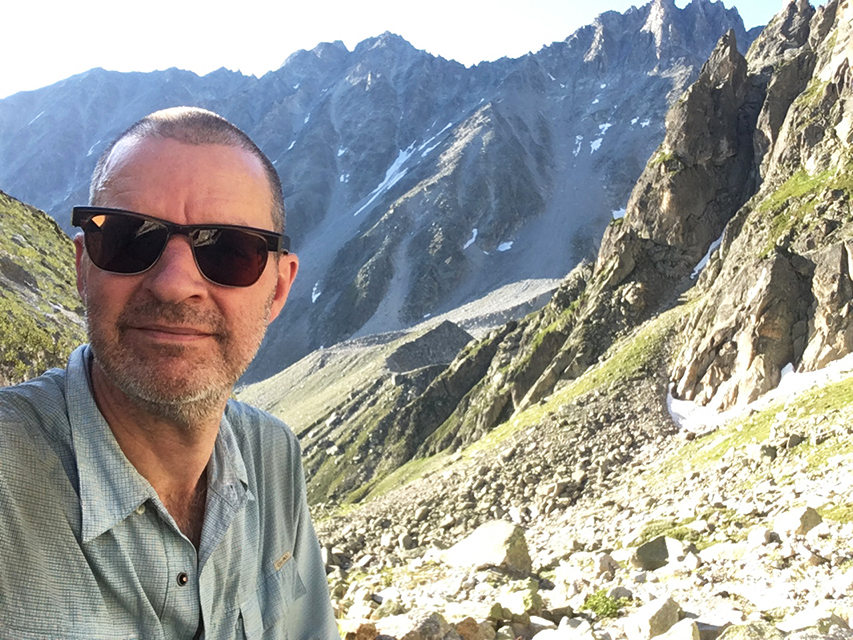 The last patch of shade for the next hour

After about 2 hours of climbing, I reached the infamous Boulder Section of the trail. This was the only part of the TMB where there actually was no trail at all. The few red-white blazes were all I had to guide me through this huge pile of rocks.

A group of 3 hikers passed me here, and man, they were speedy! I looked carefuly where they chose their route through the boulders, as a guide for my scramble. I kept my my eye on one big protruding rock that they passed, and I used that as my beacon.

Climbing the boulders is tough, but it was also great fun to do. Such a challenge, and was struggling with it, all alone, but I never felt so good on the entire TMB. It really reminded me of the climb to Forester Pass on the John Muir Trail, last year. 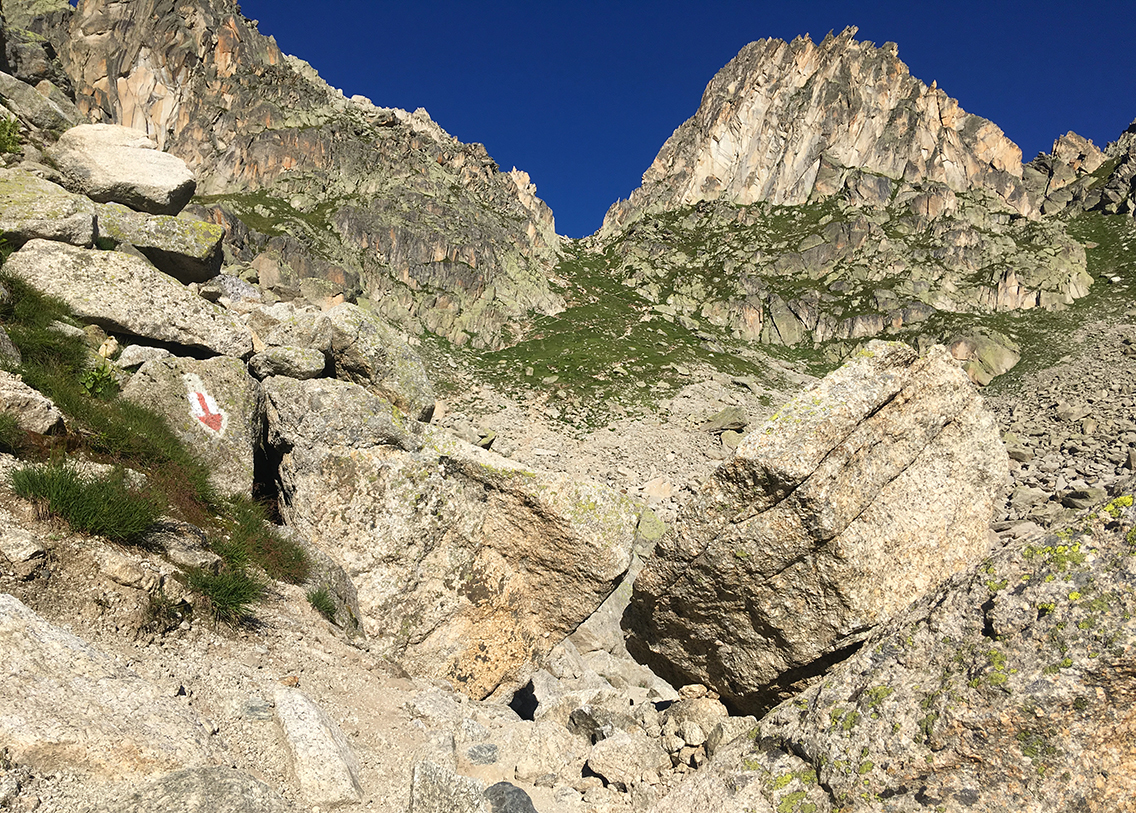 In the middle of the boulder field before Fenêtre d’Arpette

The sun was out now, it was hot, and there was absolutely no shade anymore. How happy I was that I started so early today. It took me about an hour to get through the boulder field, my hiking speed was slowed down to almost zero.
The I finally reach something that looked like a trail again, zigzagging up very steeply. 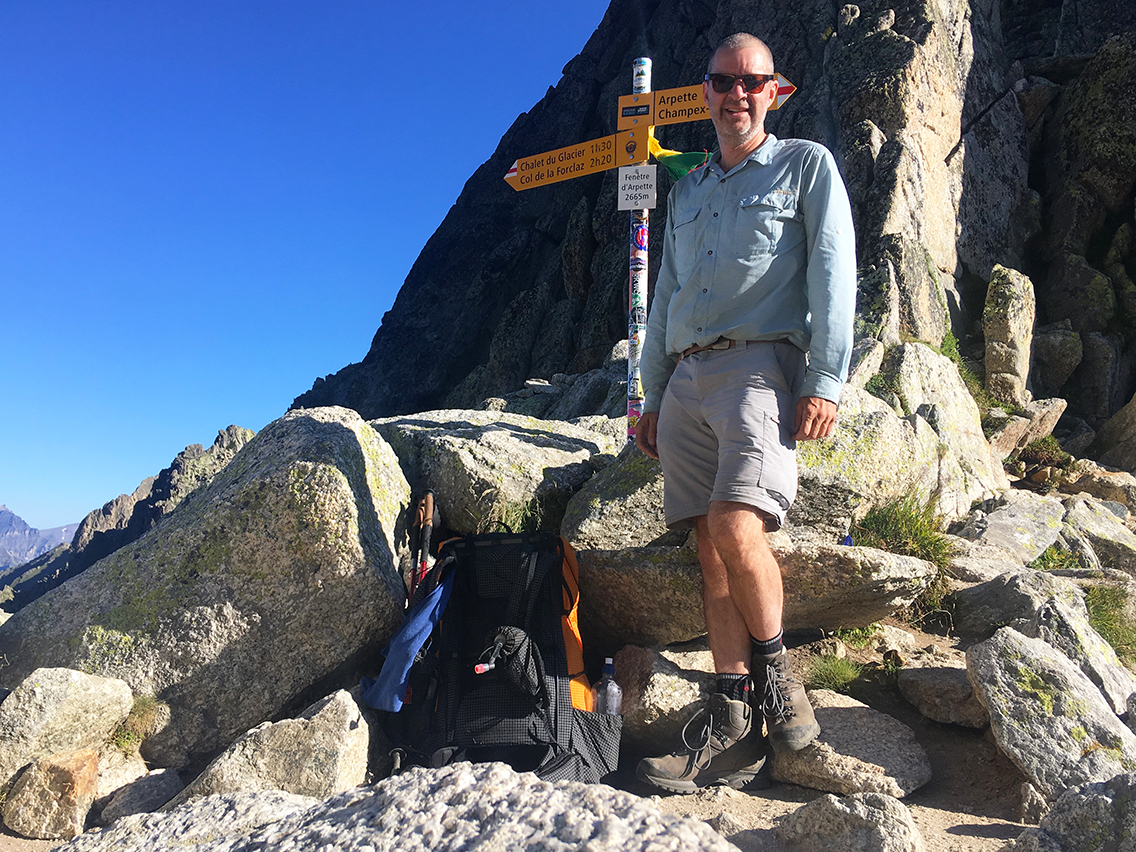 It took me one last half hour of steep trail to reach the pass. And there I was, again on exactly 2.665 m altitude (the same as Col des Fours on day 3), the highest point of the TMB again. What a view, looking left to the Glacier du Triënt and into the valley, and to the right the valley of Arpette.

The east side of the Fenêtre d’Arpette was completely in the shade again, and cold! I put on my jacket and woolen hat and started my hike down. The first part of the trail was very steep and rocky, and sometimes hardly a trail. Steps down the length of an entire leg: sometimes I really had to sit down to be able to get down safely. 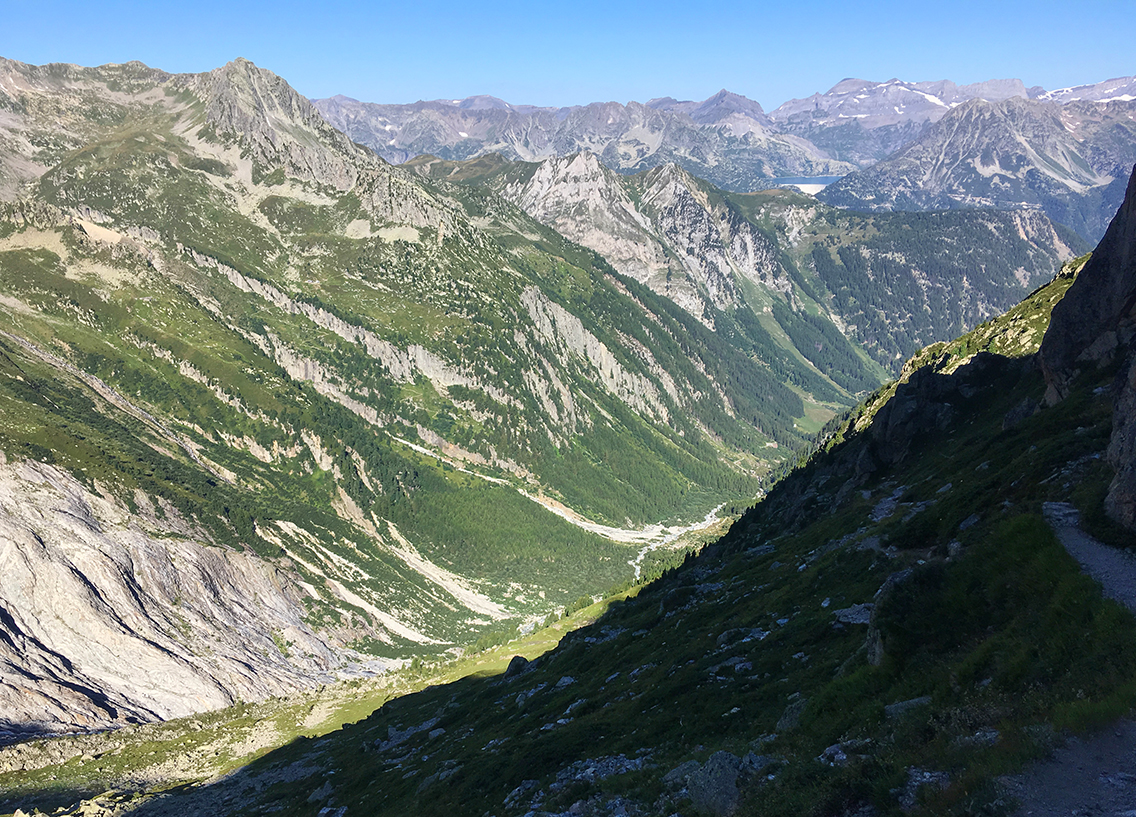 View into the valley of Triënt

Scrambling down lower and lower, the trail got better, and instead of 100% concentration of getting down, now I could start to enjoy the views of the valley below. It seemed like an endless hike down. All the way down, the Trient glacier was accompanying me on the left side. The unbelievable power of the ice, that had carved the entire valley during millions of years, awed me. 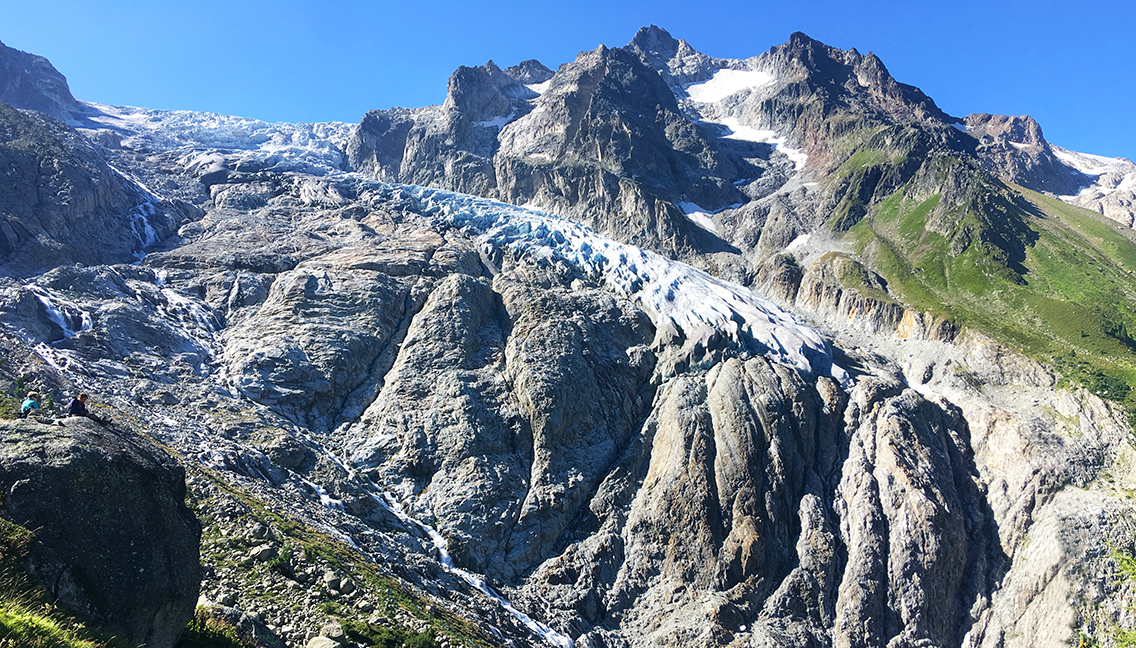 Glacier du Trient, note the two hikers on the big rock on the left.

Meanwhile the sun had risen higher above the mountain ridge that I had just passed, and the trail was in bright sunlight now. Shedding more and more layers of clothing, I hiked on, coming across more and more hikers going up. At one point, where the trail is made of steel stairs with guiding ropes, a guy was hiking up with an enormous backpack, plus an extra backpack (actually the size of my own backpack) up front. He was sweating like hell and did not seem to have a good time (he said he was fine though, when I asked him).
That’s a thing that struck me many times on the TMB: hikers with way too heavy backpacks. I am doing my best to keep my base weight low, but I am not an ultralight hiker. Still, when I would double my pack, I would not even come close to the size of backpacks that I saw on the trail. One advice to future TMB-hikers: try to keep your pack (without food and water) below 10 kilograms (22 lbs). It will make your tour so much better. 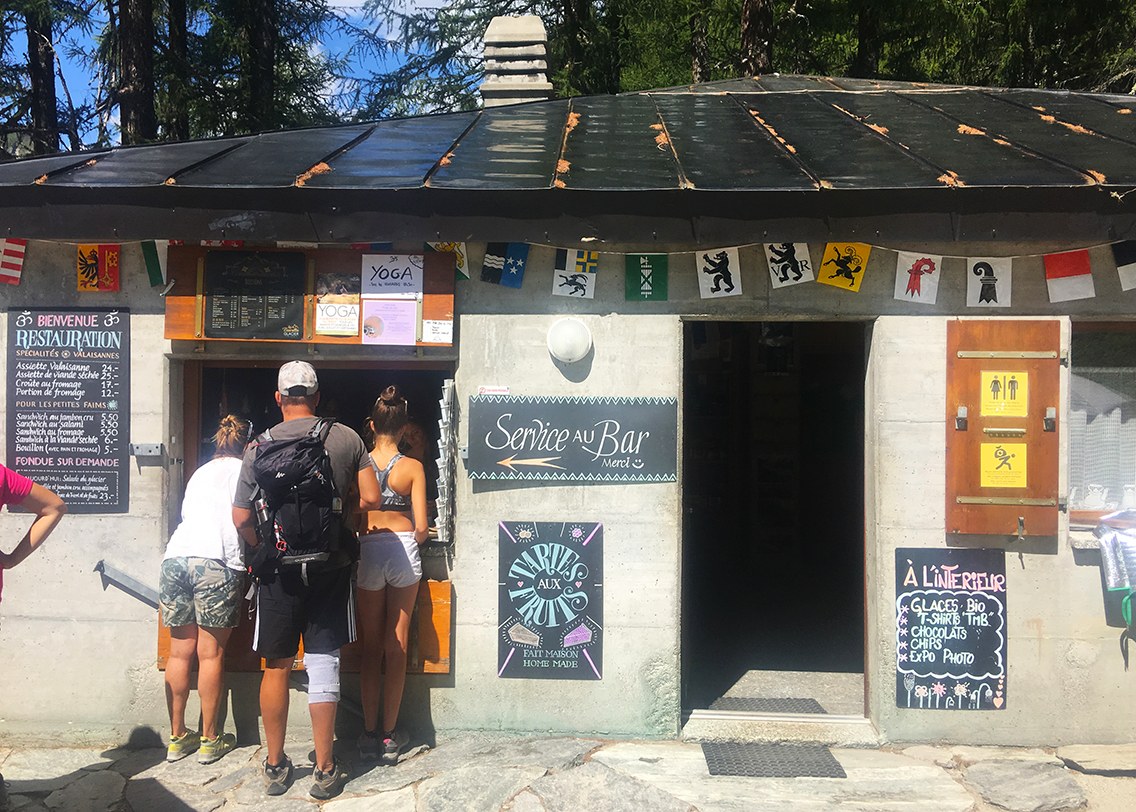 The last hour down was very hot, so I was already scouting for a spot where I could reach the river and cool down my feet in the water. It took some time to find the place, but when I found it, it felt so good soaking my shirt in the cold water and having my feet cool down. It turned out I was only 5 minutes away from the Chalet du Glacier, the first sign of civilization after I left Arpette early this morning. It was noon now, 6 and a half hours after I started my hike.
The Chalet is a real nice place for a break; it has a good bathroom and shady tables with parasols. Moreover, they serve excellent food. I had a Swiss Cheese sandwich plus an Assiette Valaisanne, with fruit, salad and more cheese. 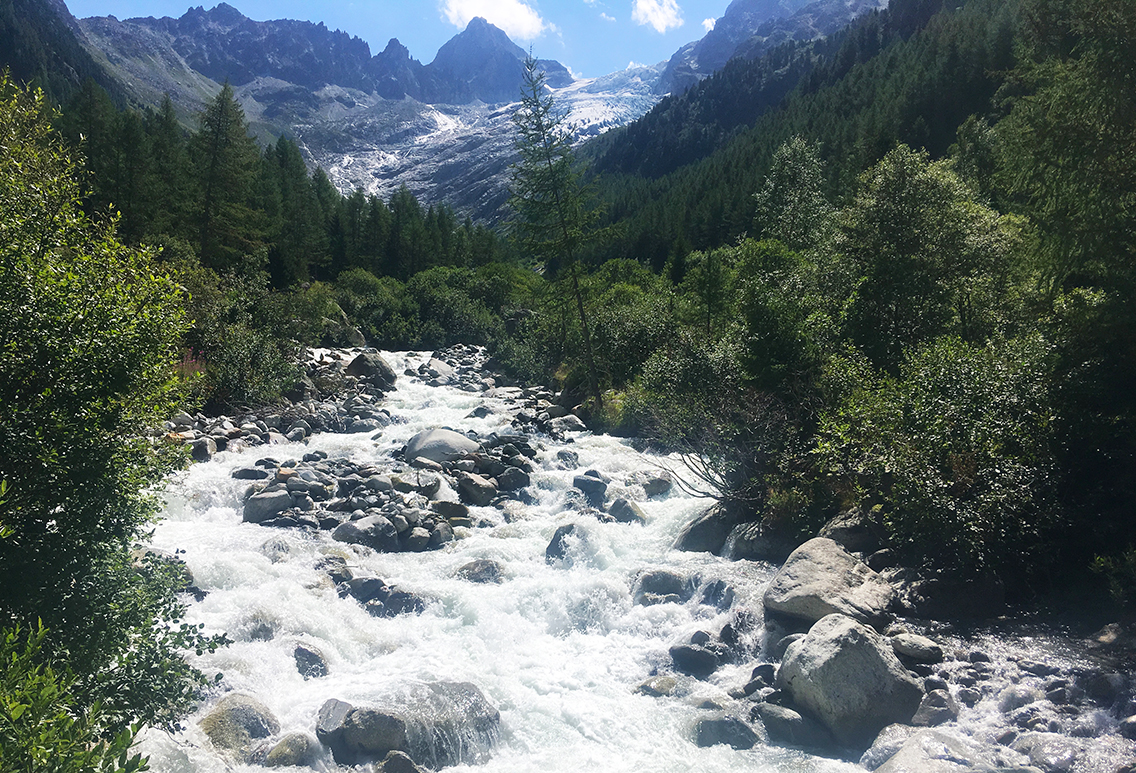 The Trient river flowing down from the glacier

I stayed at the Chalet for about an hour, then walked down to the nearby bridge crossing the roaring Trient river. The trail to the right leads to La Forclaz, but I went left, to go the the little village of Le Peuty, that has a campsite. Before hiking on though, I took a dip in the ice cold river, just behind the bridge where the water was not so wild. Completely refreshed I finally resumed my hike at 1:30 pm. I immediately met my campsite pals Liisa and Mikhal again, who had started the hike later, but did not lose 1,5 hours at the Chalet like me.

We hiked down the last half hour to Le Peuty together. I learned about their homeland Estonia, once Soviet occupied territory, now a free country, and even a EU-member just like the Netherlands where I live. We hiked down the last stretch of trail chatting and before we knew we arrived in Le Peuty. 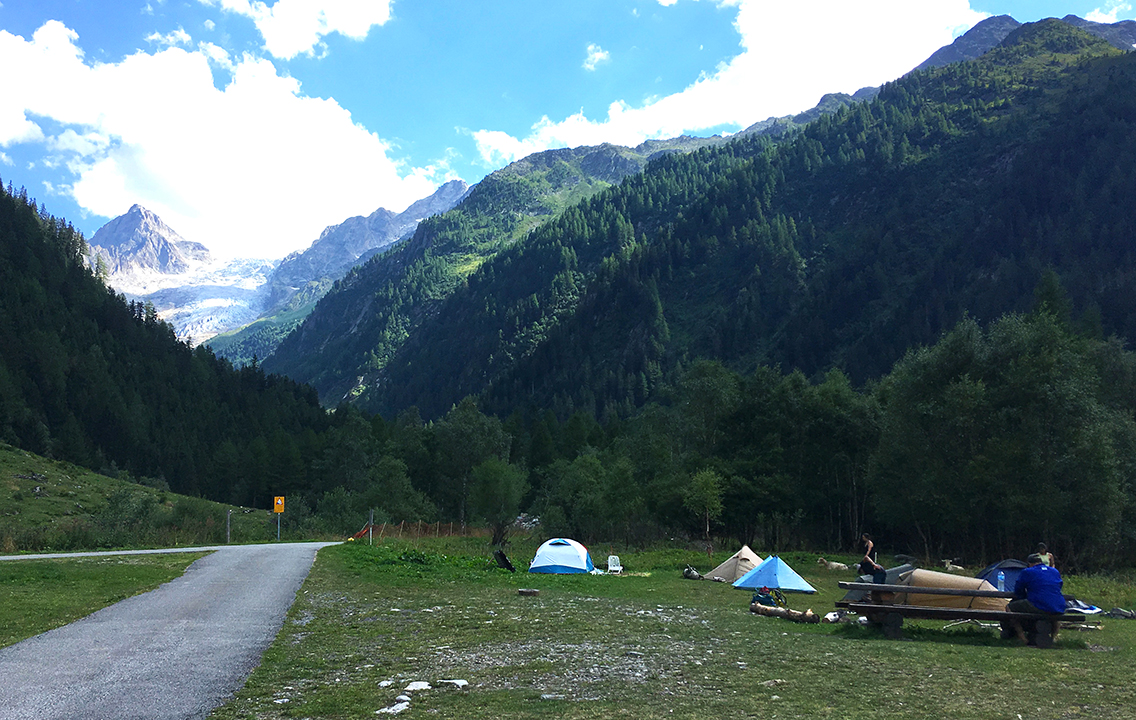 The village seemed to consist of nothing more than a small field of grass – the campsite  – a Refuge, two yurts, and just a few other buildings. We sat down in the small garden of the Refuge du Peuty with a glass of beer, before we set up camp. When the wind started blowing real bad, we took shelter inside one of the yurts, that turned out to be part of the refuge. There we added some fries to our beers, we really deserved a feast after the Fenêtre d’Arpette.

The campground is not part of the refuge – don’t ask the friendly crew at the hut wether it is! They get this question a thousand times a day. The campsite is run by a lady that comes to the campsite around 6 pm to collect € 5 for each hiker.

The campground was quite primitive and a bit run down, but had enough space for our tents, and the two dozen of tents that would follow later on the day. There was just a very simple plastic cabin, with lukewarm water, that served as a shower. But the good thing about this site was the big wooden, half-open shelter. It would serve all hikers very well, the next morning. 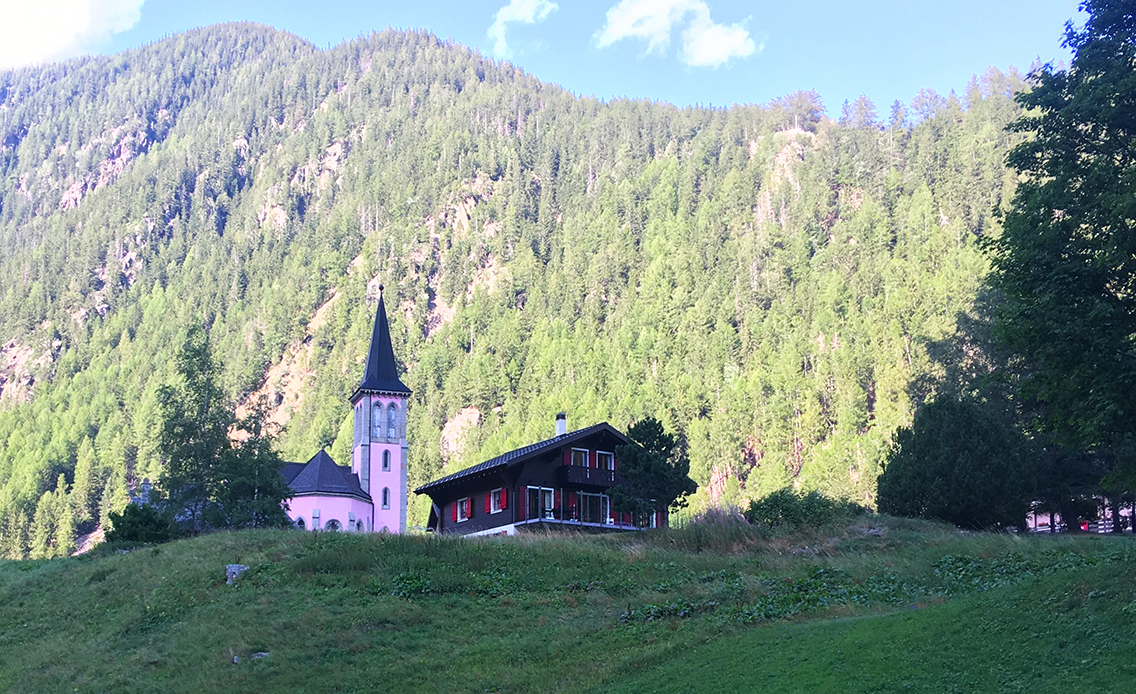 The small pink church of Triënt

After I set up my tent, I walked down the road to the village of Trient, to see if I could buy some supplies there, but to no avail. There are no shops in the village, so I was happy to have some dry freezed food with me. Back at the campsite, more tents were popping up like mushrooms. A group of Dutch Phd students were setting up their tents next to us. Their leader Robert told me about two crazy guys hiking the GR5 (Geneva to Nice) who were doing the entire TMB just as a little side trip! Later that evening I met these hikers, brothers Finn and Connor, in the shelter where everyone was cooking their meal. Robert and I had a nice chat with them, and we both ended up in their Two Fools Walking video-blog for a few seconds (somehow I always seem to end up on other hikers’ video blog!). 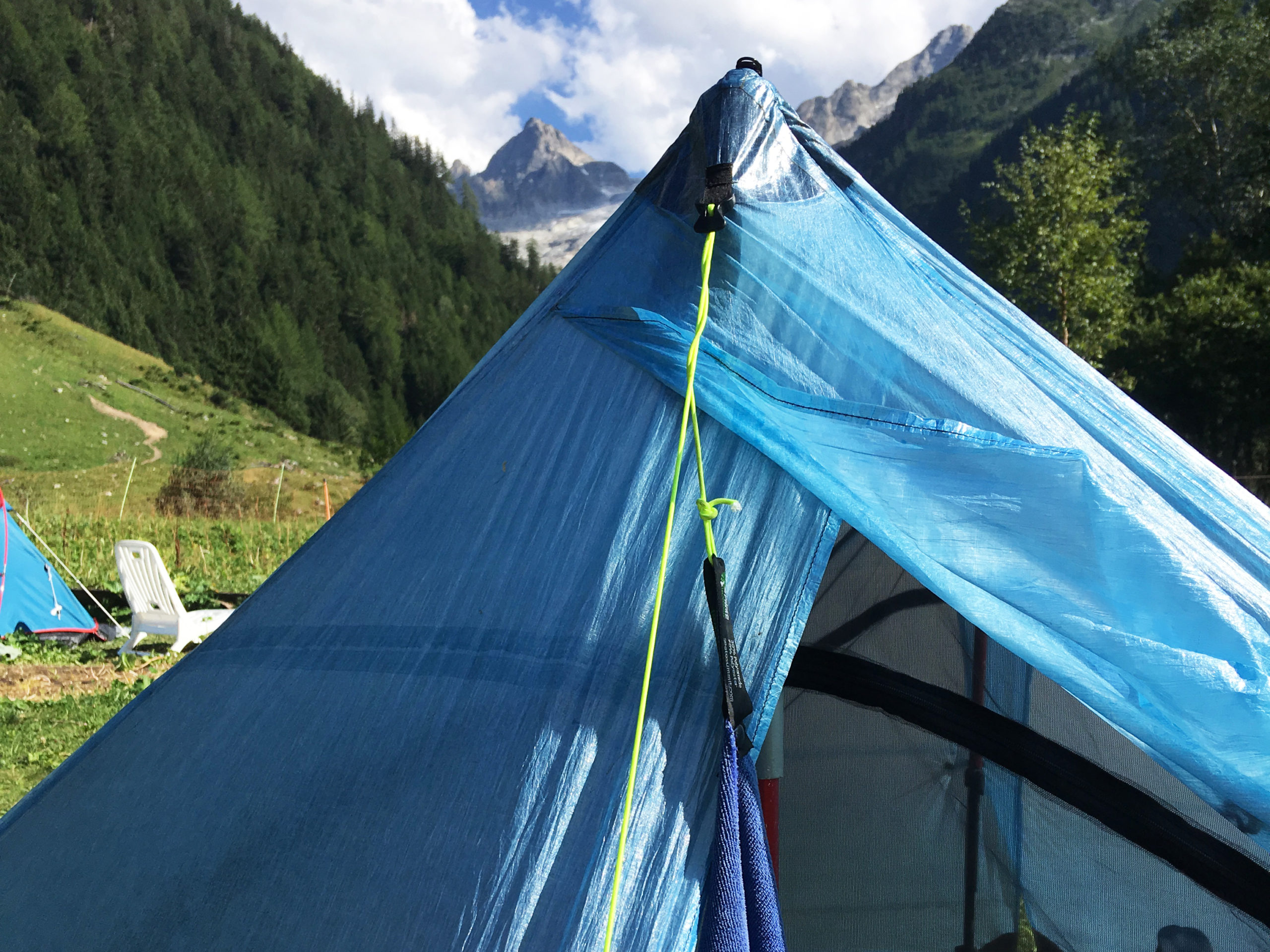 The top of Le Génépi next to my ZPacks Duplex tent.

The air was becoming cloudy, and from some hikers with internet connection, we learned that the weather would be deteriorating tonight. Checking my tent, poles and guylines for stability, I took another look to the glacier and the mountains I had hiked today. This campsite might be a bit primitive, but what a view.