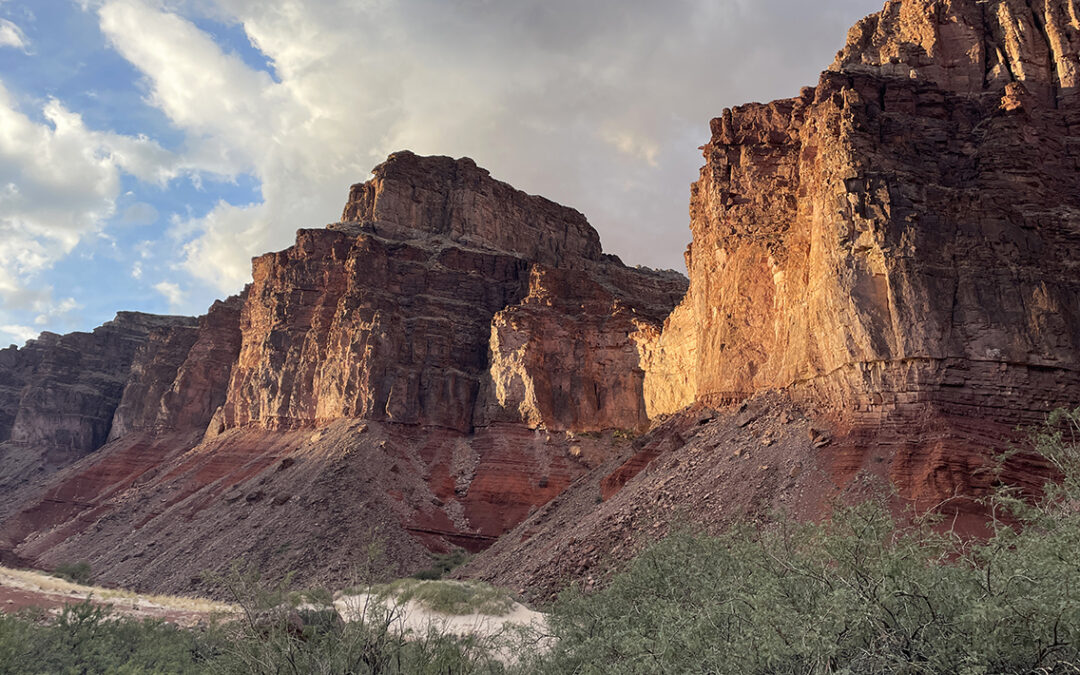 Day 3 of the Escalante Route was the shortest of all, but it featured two of the most spectacular sections of the route: the 75 Mile slot canyon and the Papago Wall and Slide. 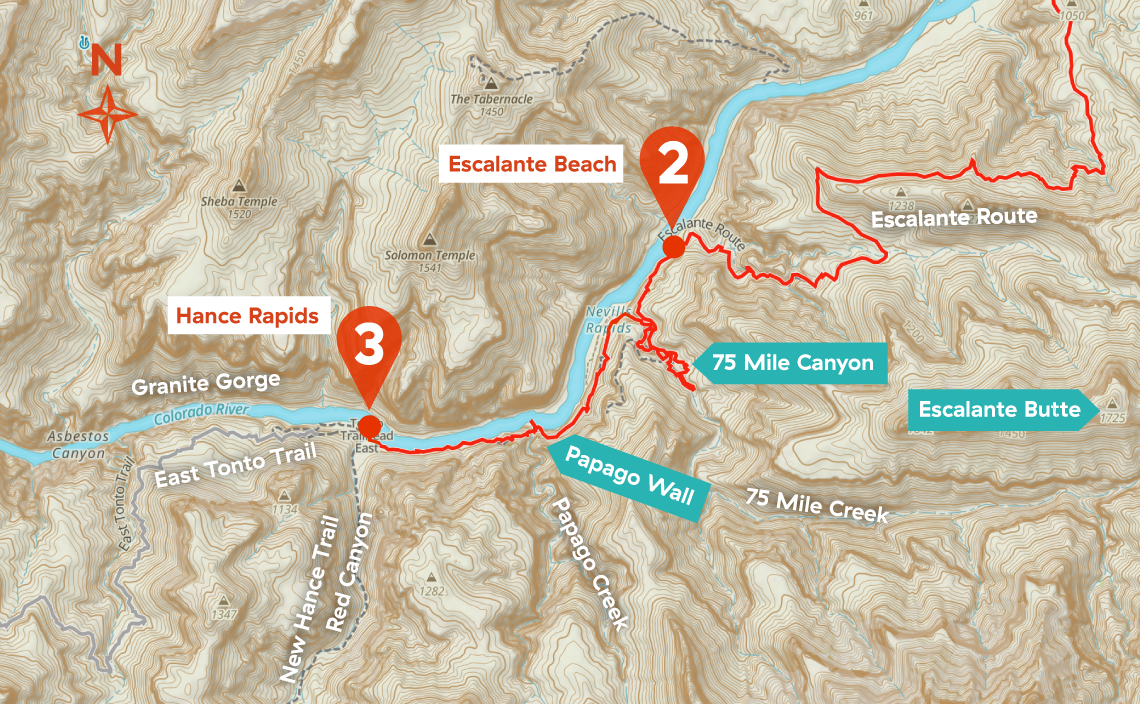 The soft sands at Escalante Beach provided an excellent surface for a good night’s sleep. The sand morphed perfectly around my body. I wake up around midnight though and I got out of bed to watch the stars. Some stars were clearly visible but the bright moon obscured the millions of stars of the Milky Way that I saw around 6 p.m. before I went to sleep.
I stood still for a while, looking at the Colorado River still flowing calmly before I went back to sleep.

At 6 a.m. I woke up again. I used the dusk to cover my visit to the cat hole I dug the evening before, as far from the river and the trail as I could. Today I would only hike a short distance. Although I would have to conquer the infamous Papago-section, I knew I had a lot of time. So I didn’t hurry this morning at all. I ate my rehydrated scrambled-egg breakfast, which was much better than the oatmeal yesterday. Also because I had cleared and filtered another 4 liters of water, without the use of alum: it tasted much better.
Packing cost a bit more time because of all the humid sand that stuck to my tent floor. I worked for 10 minutes to get most of the sand off my tent. 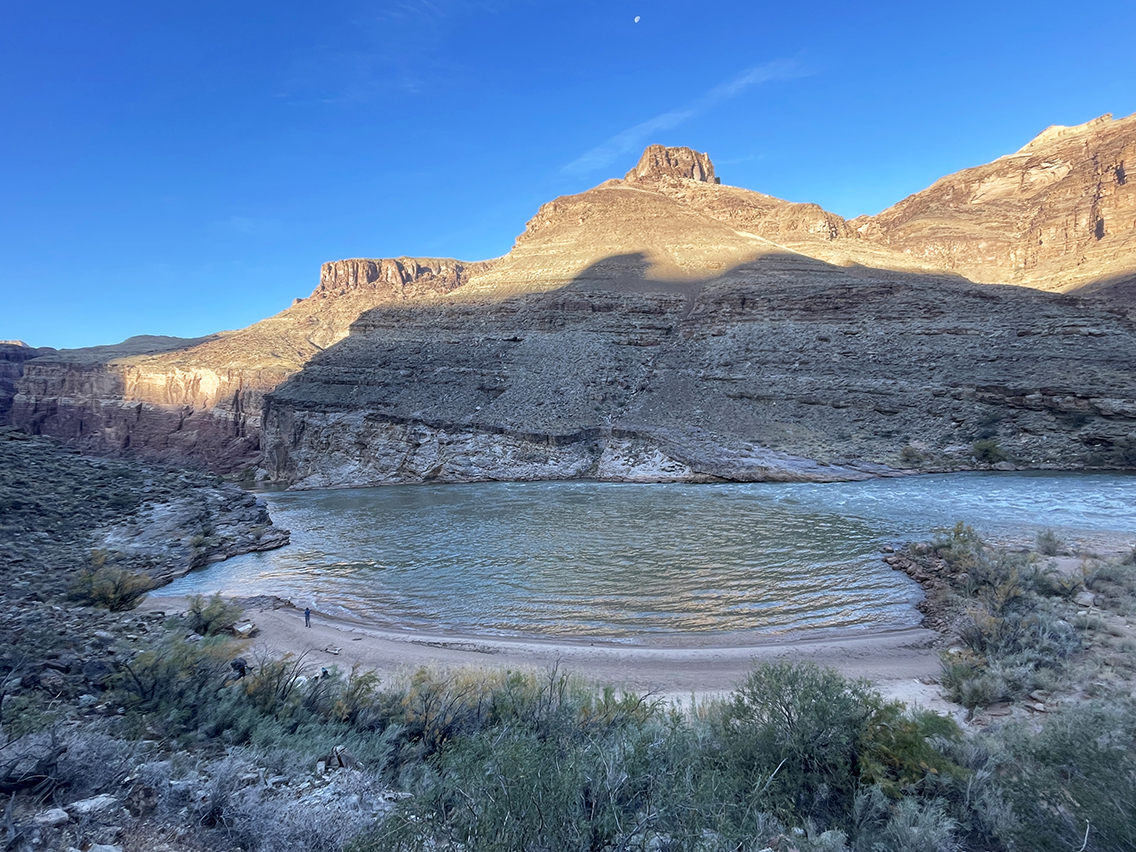 Ecalante Beach seen from the trail above.

At 8.15 I left camp after saying goodbye to my neighbours who were also hiking to Hance Rapids today. We talked a while about the upcoming Papago Wall: one of the women had already made this ascend twice. She had brought rope to haul the backpacks up the wall, she told me. This gave me an uneasy feeling: would I be able to do it alone without these ropes?
I said I would wait for their arrival at Papago Beach, so we could scale the wall together.

But first there was another major challenge: the 75 Mile Canyon.

Hiking up from Escalante Beach it took me only about 20 minutes to reach the clifftop above Neville Rapids at the 75 Mile Canyon mouth. Seen from the cliff the rocky beach was so close, but it was a 100 feet down a ghastly abyss. It would take a whole hour to reach the beach, contouring the canyon. For half an hour I ascended along the sharp edge of the canyon all the way to the point where I could scramble down to the canyon floor. 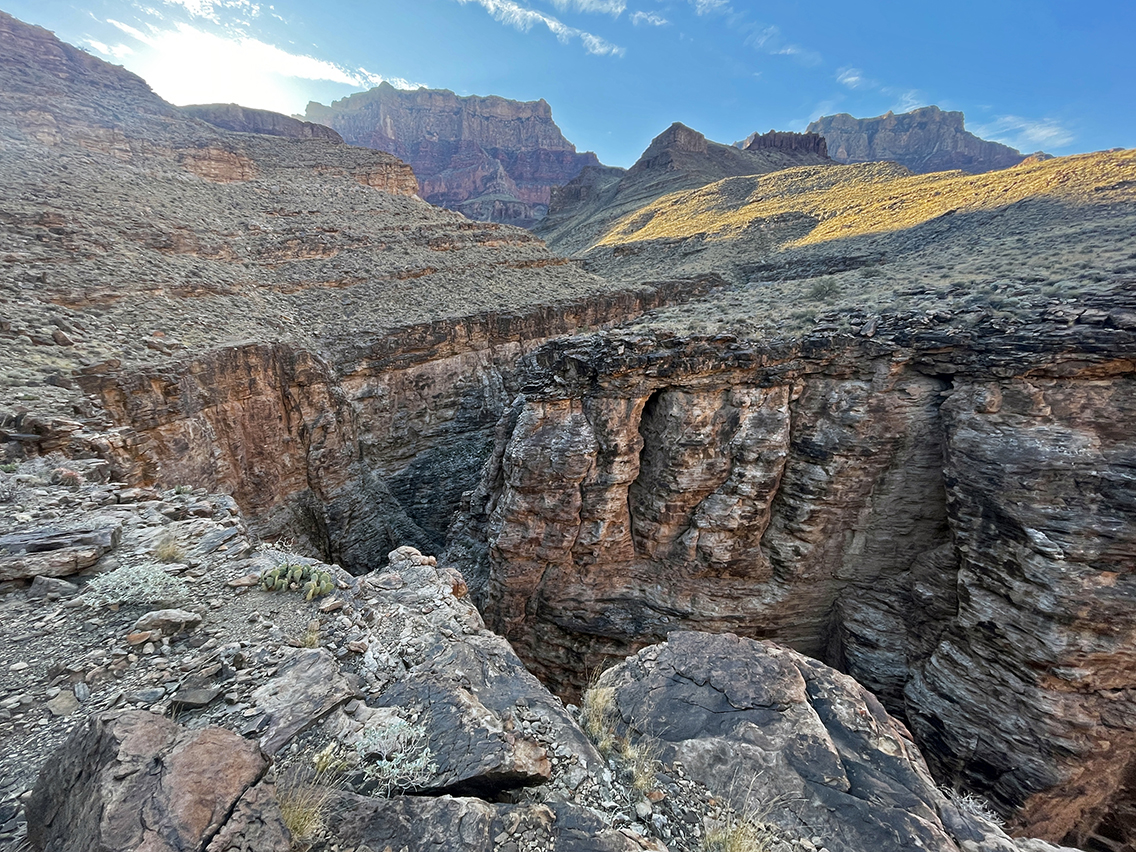 The sharp edges of 75 Mile Canyon

Although the trail was at safe distance from the edge most of the time, I hiked slowly and payed attention to every step I took. Still I got lost at some point when I apparently missed a cairn. I had walked too high up and away from the edge.

But within half an hour I reached the point where access to the canyon floor was possible: a white marble-like dry fall into the canyon. 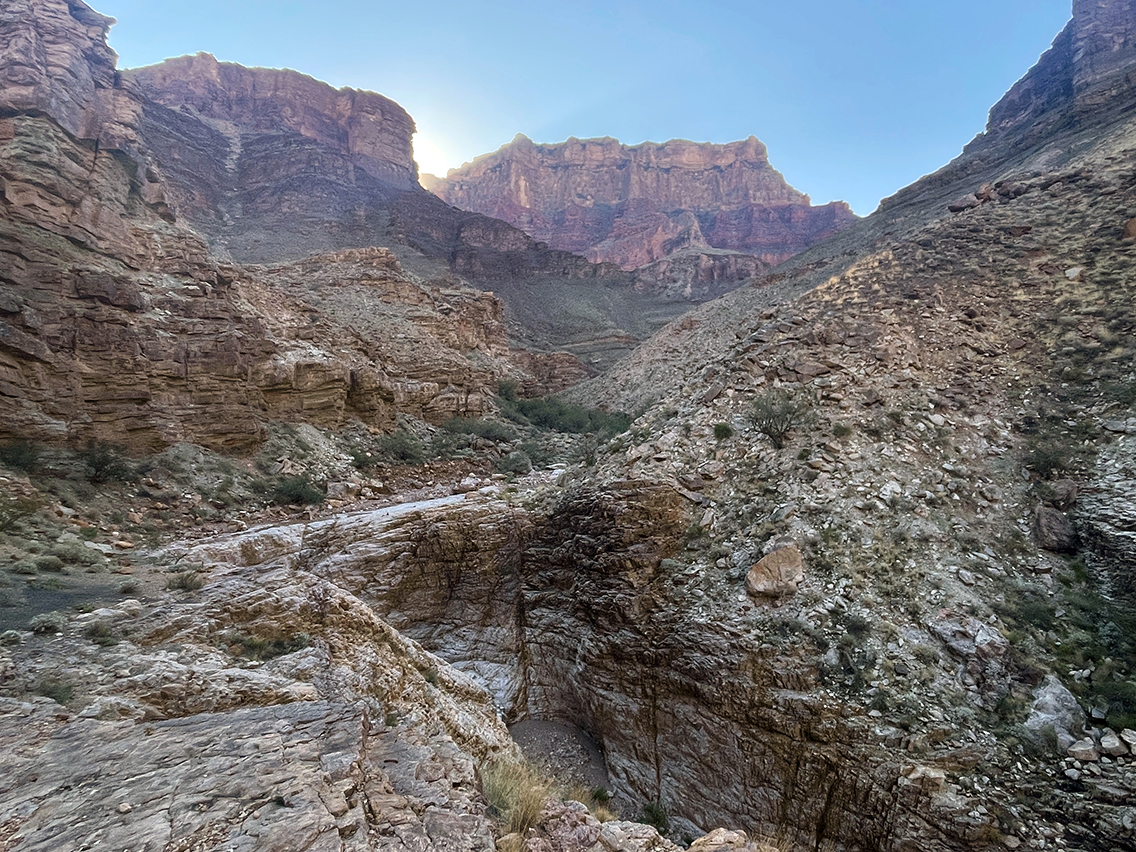 The important thing at this point was to walk to the other side of the canyon and descend on the west side. There were cairns on top of the white marble and on the ledges below that showed the right route on the ± 12 ft (4 m.) descend. I threw my hiking poles to the floor and scrambled down using my hands, navigating the sharp and narrow ledges. Within just 1 minute I landed on the sandy bottom and picked up my poles, relieved that I made it down safely.

Inside the Slot Canyon

Once at the bottom of the canyon, an easy but spectaculair section of the Escalante Trail opened up to me: a flat, slowly descending trail.  To my left and right sandstone walls stood higher and higher as I walked on. The rocks were all colors ranging from brown and orange to  yellow and white. Sometimes the zigzagging path was only a few feet wide between the walls (but it was never claustrophobic). 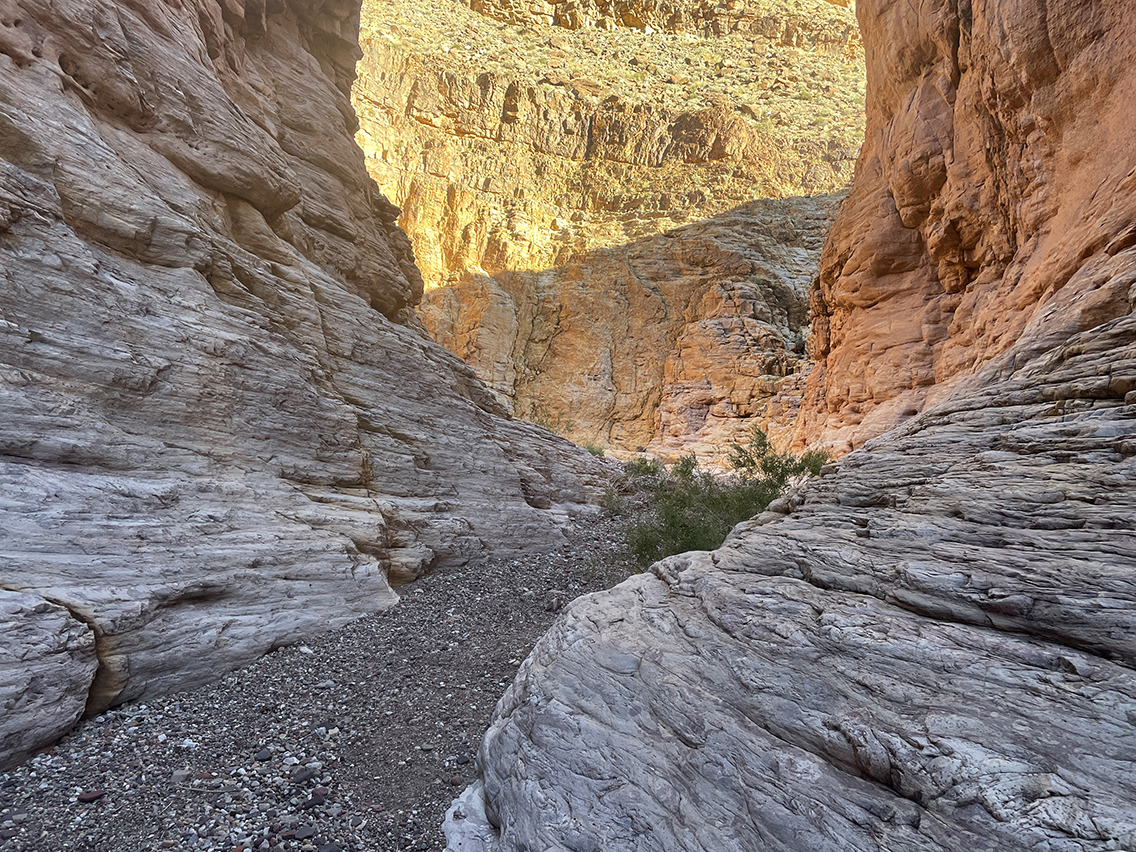 What a contrast between today’s canyon and yesterday’s wide open space above Cardenas Beach! It took me no longer than half an hour to reach the mouth of the canyon at Neville Rapids. The beach was rather different from Tanner, Cardenas and Escalante Beach: not only was it rocky and overgrown, it was also completely shaded. 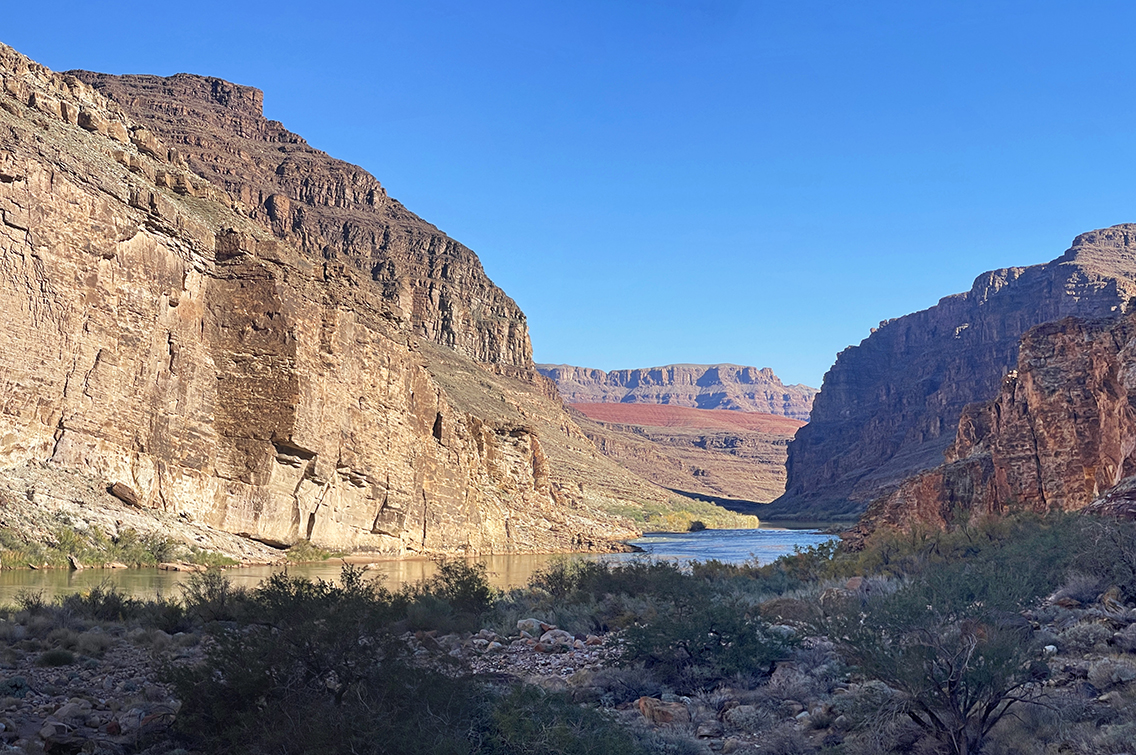 From the beach I looked back to where I came from, but Escalante Beach was hidden behind the rock walls.

From the beach a steep trail went further west: a pretty tough trail that required much of my concentration. The trail was going up and down along a steep slope full of rocks. I was searching for cairns trying not to look down too much.  When I felt a secure and solid spot, I stood still for a while to absorb the dramatic scenery in front of me: the curving Colorado River, the bright red rocks in the distance and the dark Papago Wall in between. 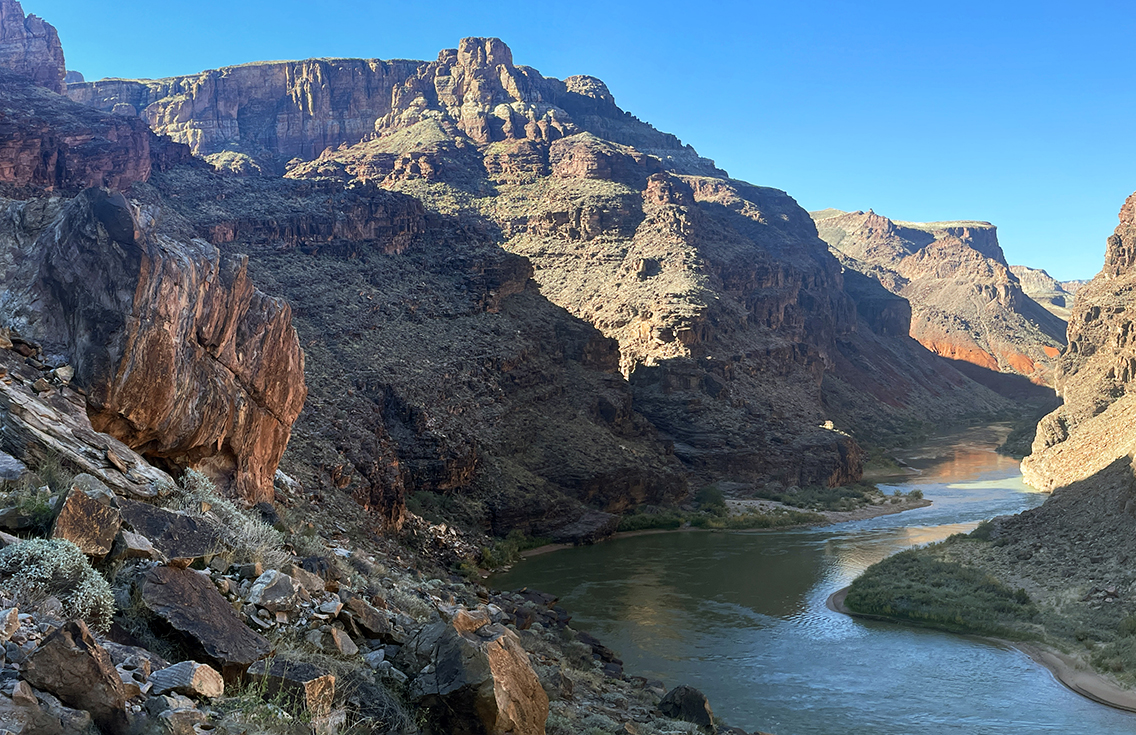 View of Papago Creek Bed and Red Canyon in the distance

I was getting closer and closer to the Papago Wall and I tried to see if the route up the wall was discernible (it was not – yet). About half an hour away from 75 Mile Canyon the trail abruptly turned to the right and extremely steep down towards Papago Beach. An unexpectedly difficult and sometimes frightening descend followed. 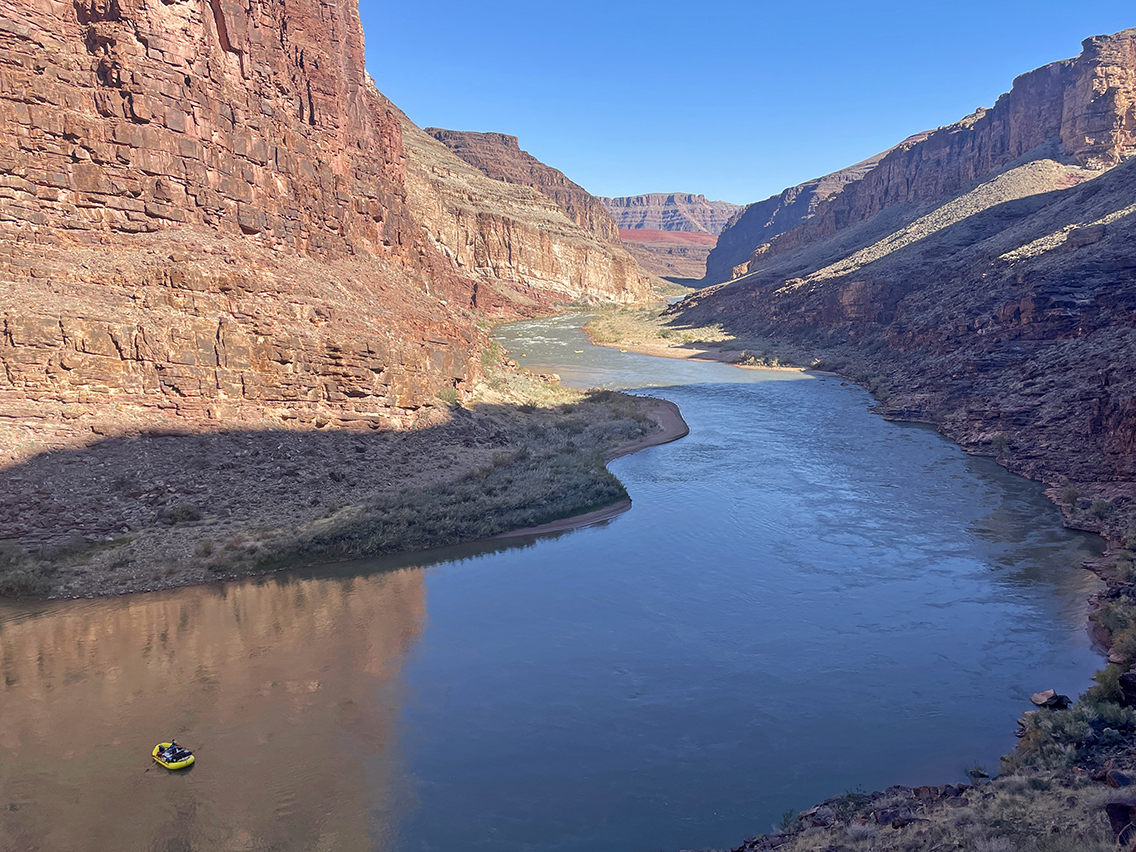 River rafters from above Papago Beach

Just as I was carefully climbing down, a group of  yellow boats was floating down the river towards Hance Rapids. On of them carried my home county’s red-white-blue flag but the boat was too far away to say hello.

I arrived at Papago Beach, more or less halfway of my entire 5 day hike. This was the section that I had anticipated the most: the infamous climb of the Papago Wall and the descent on the other side at the Slide.
Having examined countless trail reports and video’s online about the Papago section, I was well prepared but also a bit intimidated. Now I was standing in front of the wall in reality, I was truly relieved. This was not as difficult as described. 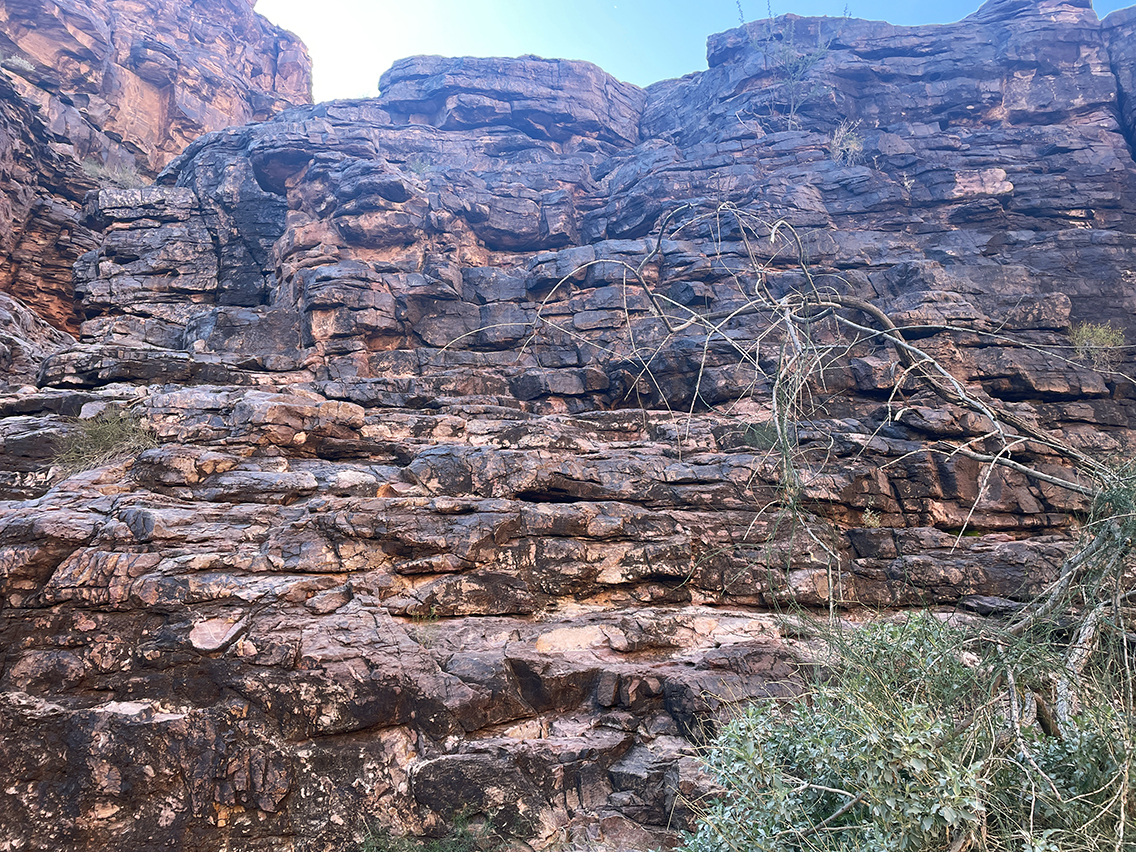 I took a lunch break first, partly because I had promised the ladies at Escalante Beach that I would wait for them. But as soon as I finished my tuna tortilla, I couldn’t wait anymore. I stashed away my hiking poles and walk up the blackened cliff.

The first part of the Wall is about 30 ft (10 m) high, but because of the many horizontal ledges, it actually resembles a stone staircase. The trick was to go as much to the left as possible and within 60 seconds I stood on top of the cliff. 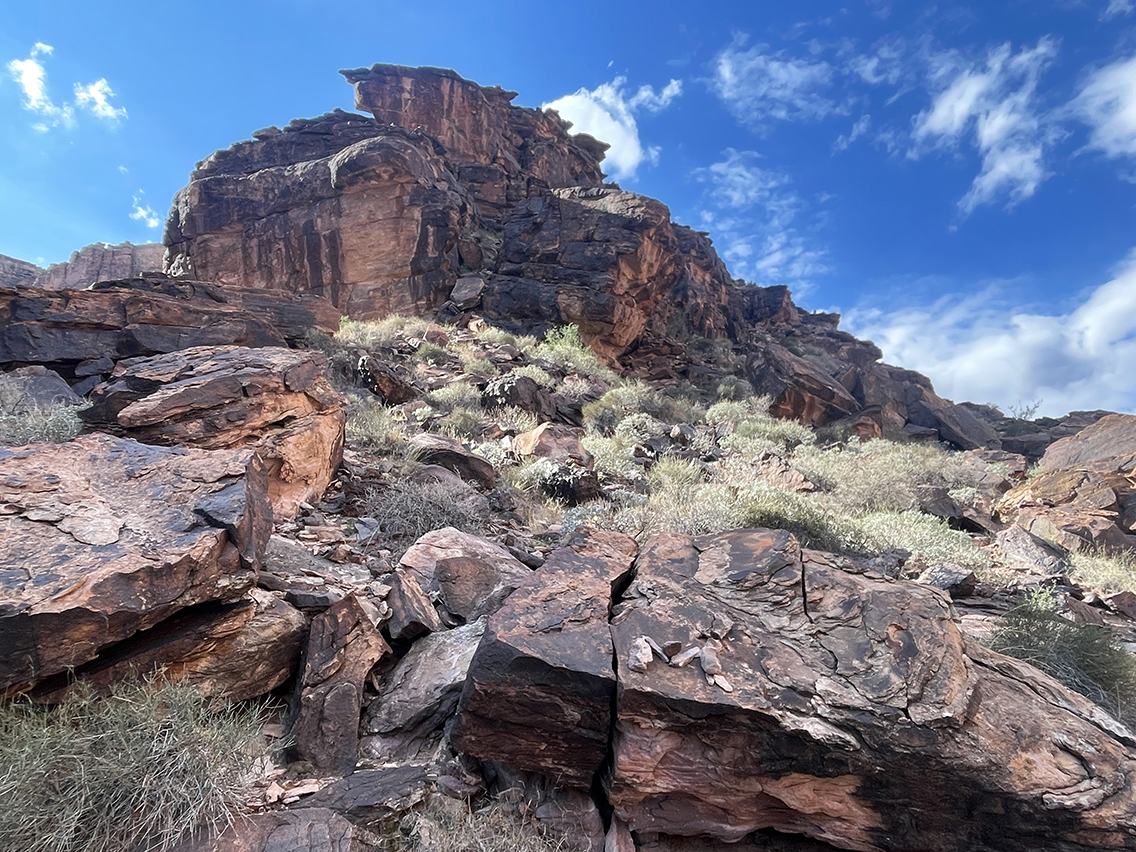 Above the first cliff of Papago wall

I walked carefully along the cliff edge to the right, around some huge boulders and found the cairns to the left towards the second climb on the wall. Actually there was a more or less visible trail all the way to what is called the ‘Tight Squeeze’, which is a narrow opening between the rocks. It was not really exposed, just very narrow and my greatest concern was wether or not my backpack would fit though the gap. Using my hands and some force I squeezed right through. I had ascended the top of Papago.

A straight but narrow trail with serious exposure on my right followed, so I walked on calmly to the top of the Slide. The view towards Red Canyon and Hance Rapids was breathtaking, with the distinctive red rod glowing in the sun. 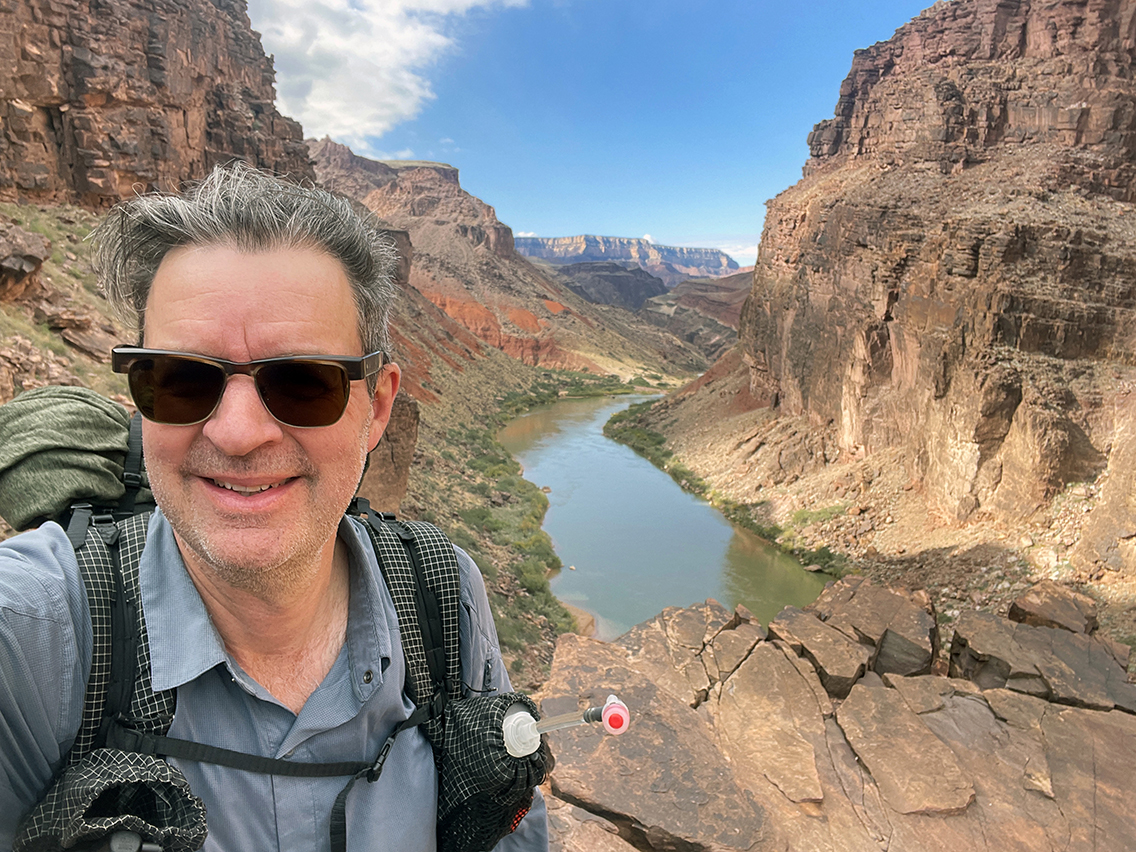 View towards Red Canyon from the Papago Top

The scramble down the Slide was a bit of an adventure, but even on this section there was a trail visible. The most important thing was to cross the chute to the other side first, before descending. Within another 15 minutes I was on firm ground again at the bottom of the chute, close to the Colorado River.

Now that I had crossed the Papago section, the rest of the hike today would be fairly easy. Following the cairns carefully I scrambled over boulders and found the sandy trail at the riverside. 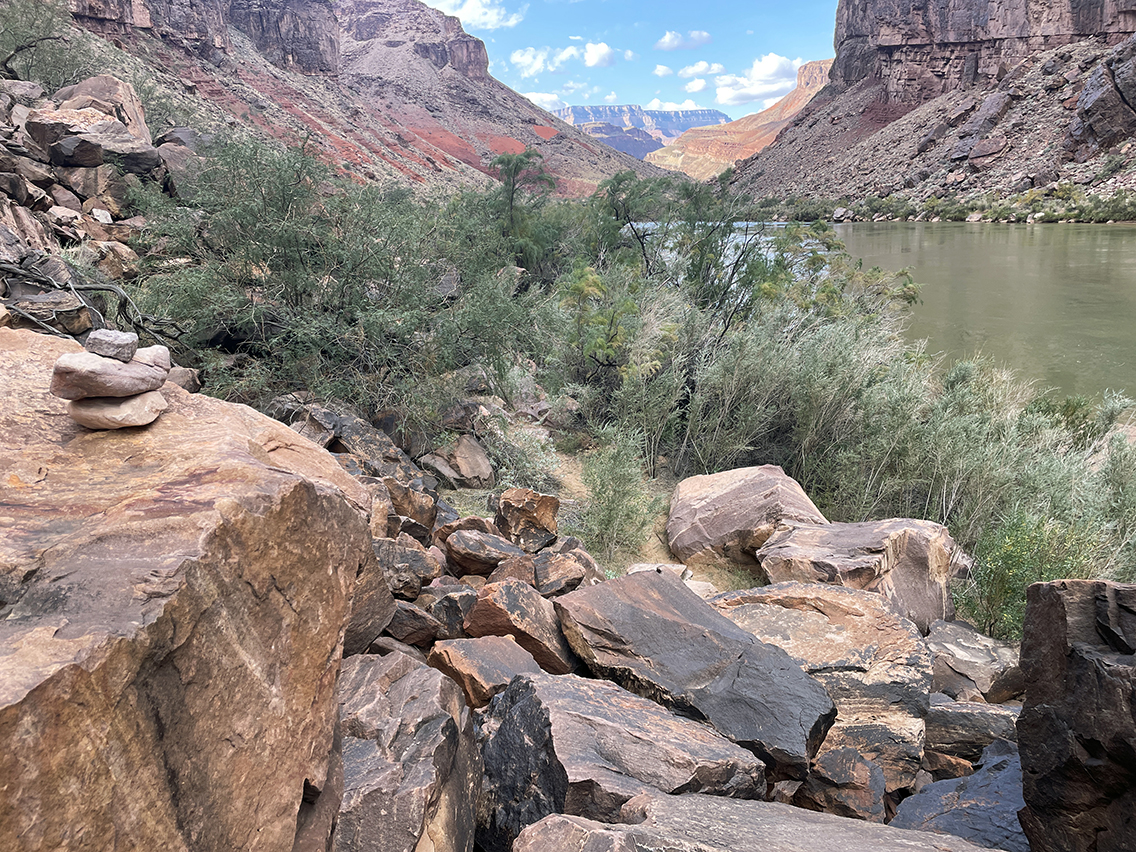 The trail was easy but partly overgrown. I was happy to wear long sleeved pants to protect my legs against the tamarisk and a the prickly camelthorn below me. And my hiking poles were very useful to push away the willow branches above me.
Soon I arrived at a spacious sandy beach which was empty now, but clearly a place were riverboat parties would camp. I walked on a bit further towards the Red Canyon mouth and found too many beautiful campsites to choose from under the cover of twisting willow branches. 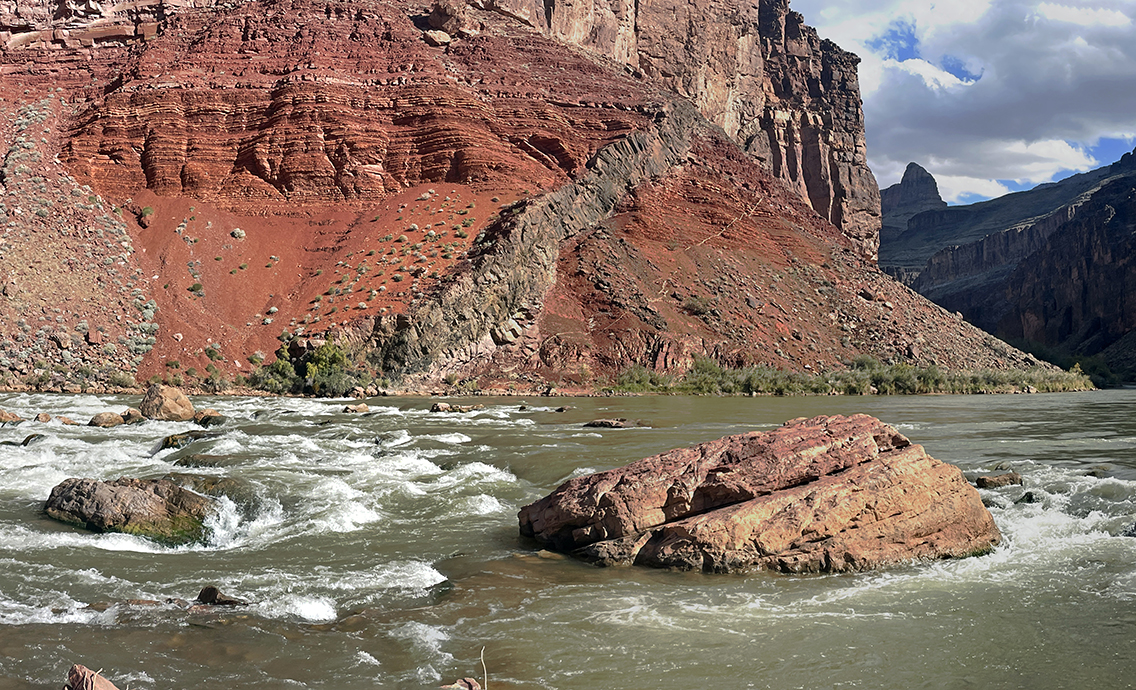 I chose a nice and secluded spot not far from the canyon mouth and the nameless dry creek bed. To the other side of the Colorado River were colossal red walls with the whitewater of Hance Rapids at their feet.

I made camp and took 10 liters of water from the river to settle in my collapsible bucket. It was still early, just past noon and I was all alone in another paradise. After a while the sun hid behind the clouds and it was getting colder so it was time to put on all my clothes, even my rain gear, to stay warm. 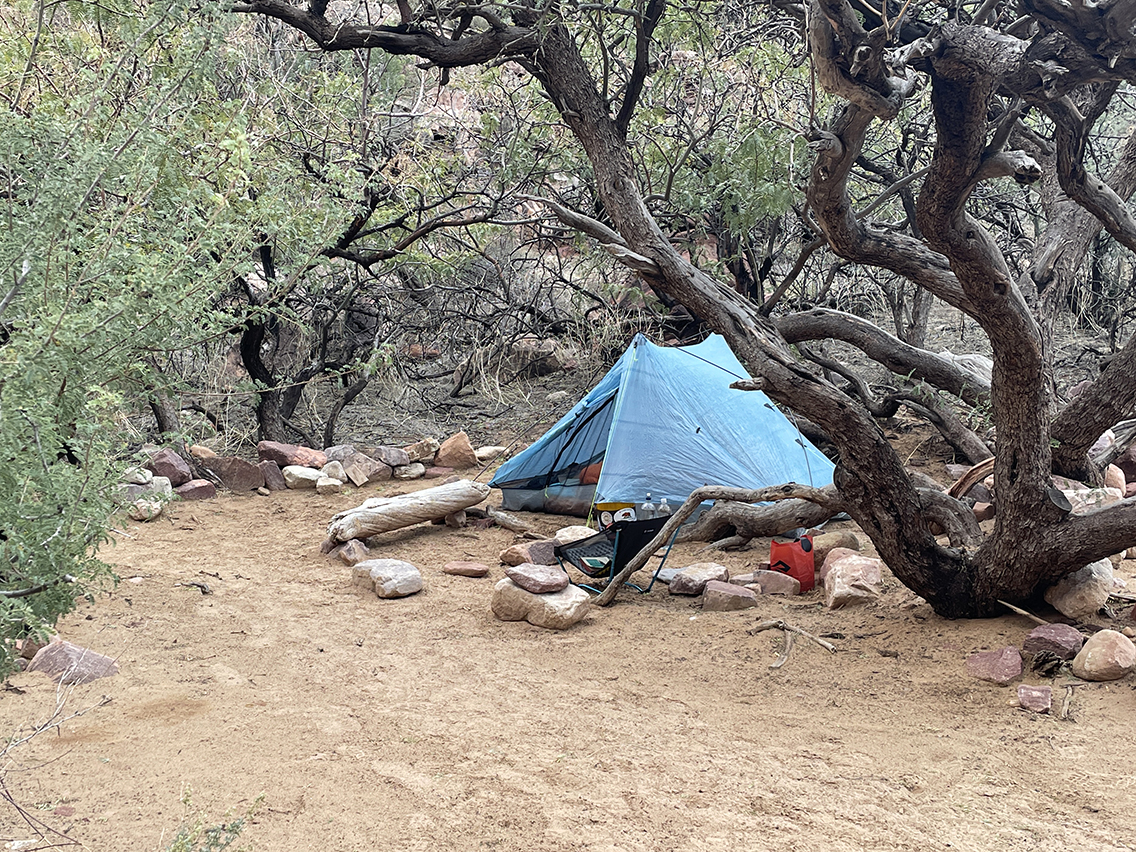 Later I had a nice talk with a hiker that came by, a friendly man who lived close to the Grand Canyon. He told told me he had hiked all the Grand Canyon trails on the map and he was just visiting for the weekend now, hiking up and down New Hance Trail in 2 days.

In the afternoon  it started raining softly and a cold wind started blowing. It became too cold to stay outside of my tent and I discovered my folding chair fit inside my tiny tent and I was able to sit comfortably without my head touching the tent wall. I spent an hour reading my book until the rain was over. I made my dinner as quick as I could, because new dark rain clouds were already coming my way. I ate my dinner inside my tent with the raindrops ticking on the blue Dyneema fabric.